London and New York, 7 July 2017 – The financing of two huge photovoltaic projects in the United Arab Emirates helped to drive a recovery in global clean energy investment to $64.8 billion in the second quarter of this year, the highest for any quarter since 2Q 2016.

The Sheikh Mohammed Bin Rashid Al-Maktoum III plant in Dubai and the Marubeni JinkoSolar and Adwea Sweihan project in Abu Dhabi, at 800MW and 1.2GW respectively, contributed $1.9 billion between them to the global investment total in 2Q 2017, according to the latest authoritative figures from Bloomberg New Energy Finance.

Other highlights of the data include bounce-backs in investment in the April-to-June quarter in China and the U.S., and sharply increased funding for projects in Mexico, Australia and Sweden. In addition, Egypt and Argentina, two new markets for renewables, saw record quarterly figures. The weakest feature was the U.K., where investment slumped more than 90% compared to 2Q 2016.

Victoria Cuming, head of policy for Europe, Middle East and Africa at BNEF, said: “The U.A.E. deals are the largest in that country to date by far, and show that its auction programs are leading to the commitment of hard cash by banks and equity providers. They also signal that oil-producing countries are warming to renewables as part of moves to diversify their economies.”

Overall, solar was the star sector in 2Q, notching up investment of $35.6 billion, up 19% year-on-year and 20% quarter-on-quarter. Wind had a weaker three months, seeing investment slip 29% year-on-year to $26.2 billion, although it was 43% higher than in the first quarter of this year.

The commitments made to both solar and wind were less in dollar terms per MW in 2Q 2017 than they would have been in previous years because of sharp reductions in costs. BNEF estimates that global capital costs for PV and onshore wind have dropped by 15% and 14% respectively in the last 12 months, in response to fierce competition in manufacturing, and technology improvements.

Abraham Louw, analyst, clean energy economics at BNEF, said: “The $64.8 billion investment total in 2Q was quite firm given that backdrop of falling costs. There was also a good spread of big projects financed in different countries, and less reliance on European offshore wind than in some recent quarters.”

There were only two large offshore wind arrays financed in Europe in 2Q – the 200MW Borkum West II and 112MW Albatros projects in German waters, at $918 million and $532 million. Other top project deals of the quarter were two Chinese 300MW offshore wind arrays, Three Gorges Dafeng and Three Gorges Zhuanghe, costing an estimated $1.8 billion in total, the 396MW Juchitan de Zaragoza onshore wind farm in Mexico, at $721 million, and the Avangrid La Joya onshore wind park in the U.S., at 400MW and an estimated $620 million.

Venture capital and private equity investment in clean energy continued its recent upswing, with $1.9 billion raised in 2Q, up 50% on the same period in 2016 and 15% on 1Q this year. The top VC/PE deals were $400 million for Microvast Power System, a Chinese maker of batteries for electric and hybrid-electric vehicles, $113 million for French solar developer EREN Renewable Energy and $100 million for U.S. energy-efficient window company View Inc.

Taking all those categories of investment together, country-level results for the second quarter included: 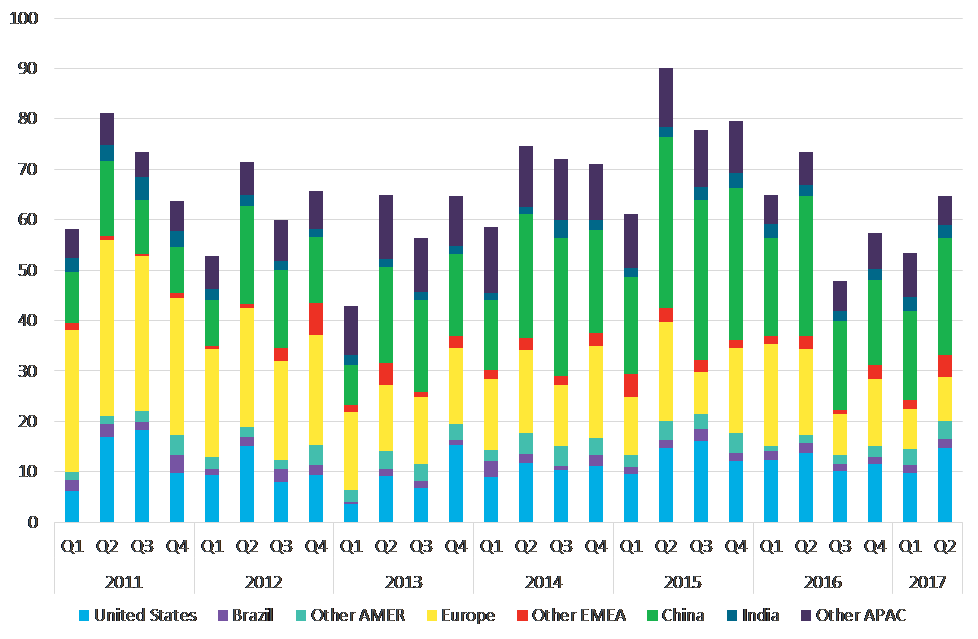 BNEF’s annual figures, published every January, include certain categories of investment that are not in the quarterly data – namely corporate and government R&D in clean energy and asset finance of smart meters and energy storage projects.

[1] BNEF’s clean energy investment total includes hydro-electric projects of less than 50MW, but excludes larger dams. An estimate for investment in large hydro is made annually.