Solar Power Will Kill Coal Faster Than You Think

By Jess Shankleman and Hayley Warren

Solar power, once so costly it only made economic sense in spaceships, is becoming cheap enough that it will push coal and even natural-gas plants out of business faster than previously forecast.

That’s the conclusion of a Bloomberg New Energy Finance outlook for how fuel and electricity markets will evolve by 2040. The research group estimated solar already rivals the cost of new coal power plants in Germany and the U.S. and by 2021 will do so in quick-growing markets such as China and India. 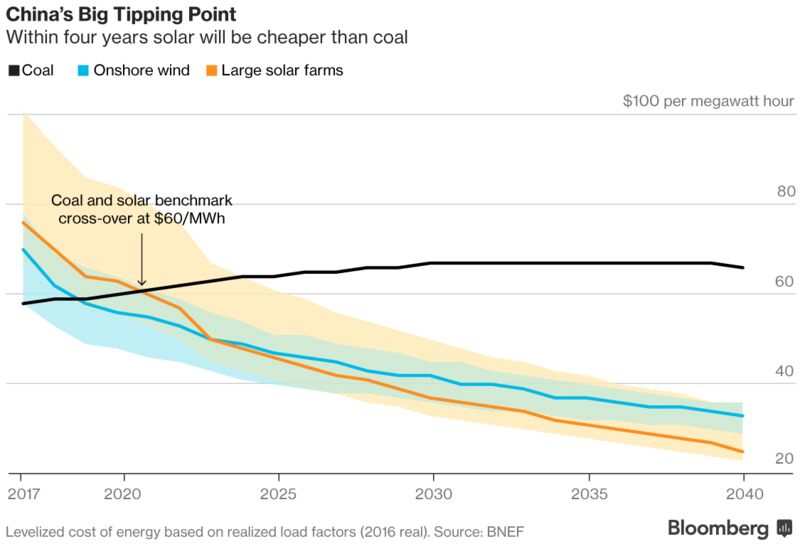 The scenario suggests green energy is taking root more quickly than most experts anticipate. It would mean that global carbon dioxide pollution from fossil fuels may decline after 2026, a contrast with the International Energy Agency’s central forecast, which sees emissions rising steadily for decades to come.

“Costs of new energy technologies are falling in a way that it’s more a matter of when than if,” said Seb Henbest, a researcher at BNEF in London and lead author of the report.

The report also found that through 2040:

China and India represent the biggest markets for new power generation, drawing $4 trillion, or about 39 percent all investment in the industry.
The cost of offshore wind farms, until recently the most expensive mainstream renewable technology, will slide 71 percent, making turbines based at sea another competitive form of generation.
At least $239 billion will be invested in lithium-ion batteries, making energy storage devices a practical way to keep homes and power grids supplied efficiently and spreading the use of electric cars.
Natural gas will reap $804 billion, bringing 16 percent more generation capacity and making the fuel central to balancing a grid that’s increasingly dependent on power flowing from intermittent sources, like wind and solar. 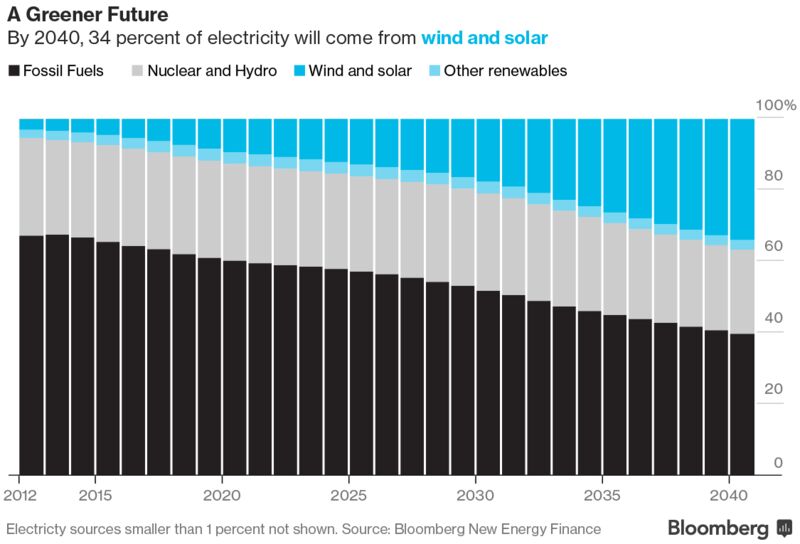 BNEF’s conclusions about renewables and their impact on fossil fuels are most dramatic. Electricity from photovoltaic panels costs almost a quarter of what it did in 2009 and is likely to fall another 66 percent by 2040. Onshore wind, which has dropped 30 percent in price in the past eight years, will fall another 47 percent by the end of BNEF’s forecast horizon.

That means even in places like China and India, which are rapidly installing coal plants, solar will start providing cheaper electricity as soon as the early 2020s.

“These tipping points are all happening earlier and we just can’t deny that this technology is getting cheaper than we previously thought,” said Henbest. 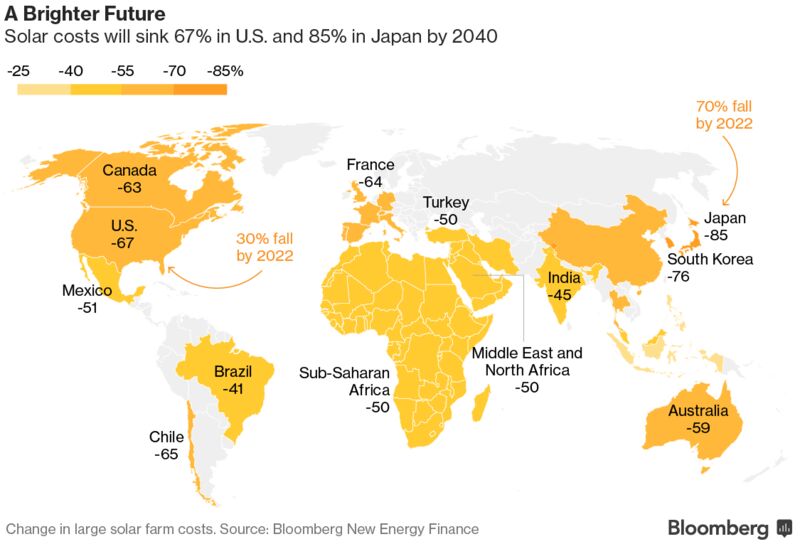 Coal will be the biggest victim, with 369 gigawatts of projects standing to be cancelled, according to BNEF. That’s about the entire generation capacity of Germany and Brazil combined.

Capacity of coal will plunge even in the U.S., where President Donald Trump is seeking to stimulate fossil fuels. BNEF expects the nation’s coal-power capacity in 2040 will be about half of what it is now after older plants come offline and are replaced by cheaper and less-polluting sources such as gas and renewables.

In Europe, capacity will fall by 87 percent as environmental laws boost the cost of burning fossil fuels. BNEF expects the world’s hunger for coal to abate starting around 2026 as governments work to reduce emissions in step with promises under the Paris Agreement on climate change. 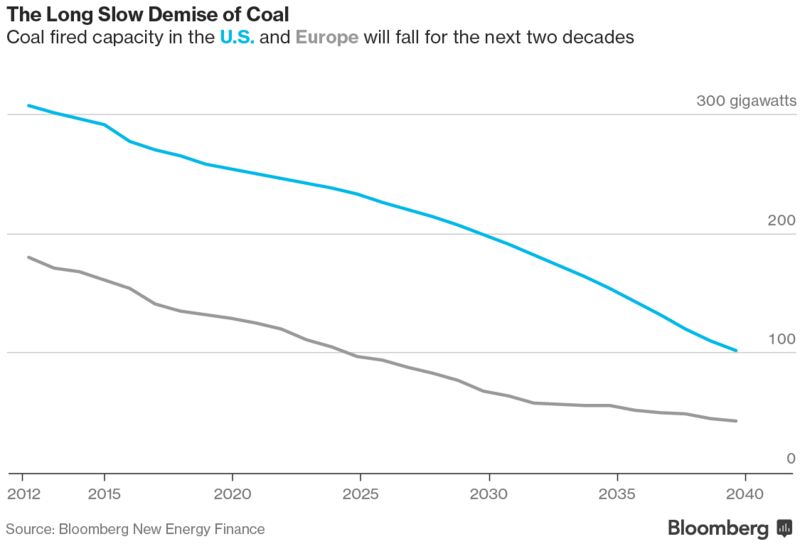 “Beyond the term of a president, Donald Trump can’t change the structure of the global energy sector single-handedly,” said Henbest.

All told, the growth of zero-emission energy technologies means the industry will tackle pollution faster than generally accepted. While that will slow the pace of global warming, another $5.3 trillion of investment would be needed to bring enough generation capacity to keep temperature increases by the end of the century to a manageable 2 degrees Celsius (3.6 degrees Fahrenheit), the report said.

The data suggest wind and solar are quickly becoming major sources of electricity, brushing aside perceptions that they’re too expensive to rival traditional fuels.

By 2040, wind and solar will make up almost half of the world’s installed generation capacity, up from just 12 percent now, and account for 34 percent of all the power generated, compared with 5 percent at the moment, BNEF concluded. 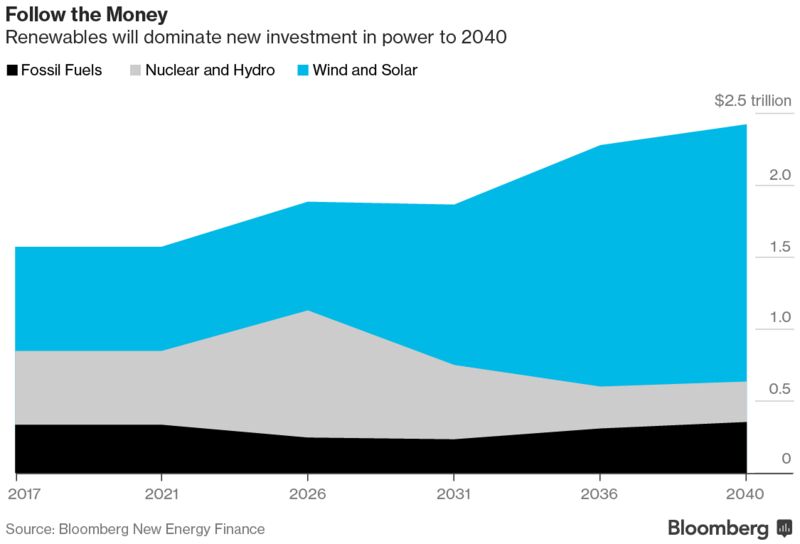