Less than a month ago, the price of European carbon allowances, or EUAs, had been knocking on the door of 100 euros per ton. But reaching that triple-digit milestone seems like a more distant prospect now amid a dramatic slump. The front-month EUA price dropped to as low as 58 euros per metric ton on March 7.

Speculative trades, rather than market fundamentals, appear to have been the main driver of the dip, with investors opting to take profits. Margin calls and liquidity required for other assets, such as gas, have also pulled support from carbon. It remains to be seen how much industrial demand destruction the war will cause. 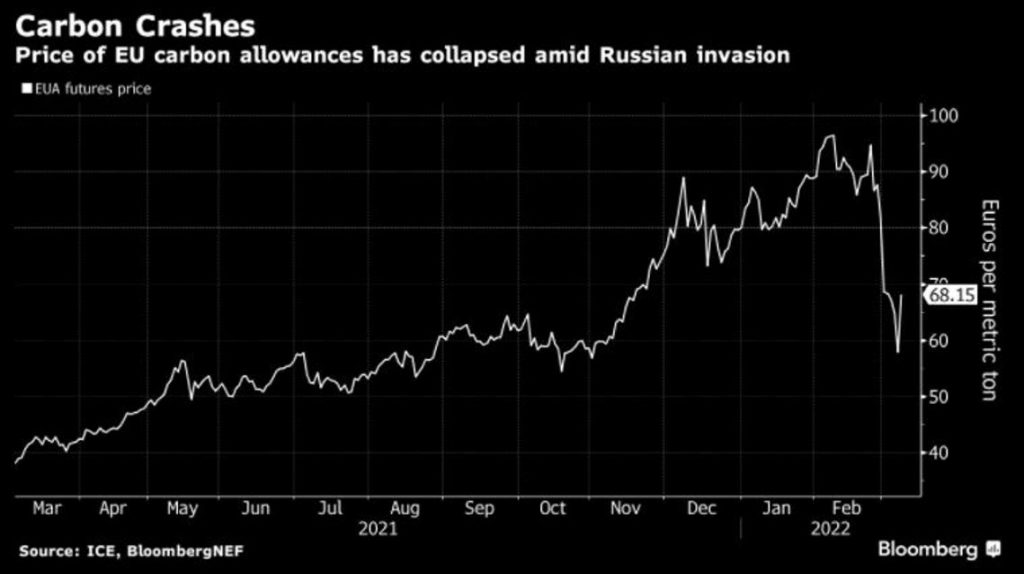 Still, it is not all doom and gloom for the European carbon market, according to BNEF. Overall, the war is expected to have a bullish impact, as high gas prices will increase coal and lignite burn, pushing up emissions and demand for allowances. Indeed, coal prices are soaring as countries seek alternatives to Russian gas, as BNEF explores here.

An opportunity for hydrogen?

With the invasion of Ukraine pushing up the cost of natural gas, prices of natural gas-derived products like ammonia are now up to three times higher than a year ago. This has opened the door for ‘green’ hydrogen and ammonia — which are produced using renewable electricity — to compete with unabated natural gas-based processes, as BNEF lays out here.

Few green ammonia or hydrogen projects are currently in operation, and new investments are decided on longer-term expectations rather than short-term prices. However, gas markets could face substantially higher prices for the foreseeable future, and green hydrogen and ammonia could be viewed as an attractive alternative to gas for both environmental and energy security reasons.