London and New York, 10 October 2016 – Global clean energy investment had its weakest quarter since 2013 between July and September this year, under the impact of a summer lull in offshore wind financings in Europe and a further stage in the slowdown seen this year in project funding in China and Japan.

Investment in renewable energy and energy smart technologies worldwide totalled $42.4bn in the third quarter of 2016, down 31% from the second quarter and a striking 43% from the equivalent three-month period of 2015, according to the latest authoritative data from Bloomberg New Energy Finance.[1]

Michael Liebreich, chairman of the advisory board at Bloomberg New Energy Finance, said: “These numbers for Q3 are worryingly low even compared to the subdued trend we saw in Q1 and Q2. A vital point to bear in mind is that there have been sharp reductions in the cost of PV systems, so that much more solar capacity can be added this year than last, per million dollars.

“However it is also clear that, after last year’s record investment levels, some key markets such as China and Japan are pausing for a deep breath. Also, in many countries, electricity demand growth is undershooting government forecasts. My view is that the Q3 figures are somewhere between a ‘flash crash’ blip, and a ‘new normal’.”

Abraham Louw, analyst for energy economics at BNEF, commented: “There is one special factor here, in the timing of offshore wind financings in Europe – these totalled $20.1bn in the first six months of 2016, a runaway record. But there was then a summer lull, with just $2.4bn in July to September.”

The global Q3 investment figures could be revised upwards in due course, if more transactions come to light. However, with the Q1 and Q2 data an average of 23% down on the equivalent quarters of 2015, it looks certain that clean energy investment in 2016 will end up well below last year’s record of $348.5bn.[2]

The brightest feature of the Q3 investment figures was a jump in venture capital and private equity investment in specialist clean energy companies. This amounted to $3.2bn in July to September, up 73% on the equivalent period last year and the highest quarterly VC/PE outturn for nearly six years.

Behind these figures were the early-stage financing of two Chinese advanced transport companies – $1.1bn for electric sports car company Le Holdings and $1bn for WM Motor Technology, which is developing mass-market electric vehicles. The third biggest VC/PE deal was $220m for Solar Mosaic, a US company providing financing for people to buy PV panels.

Public markets investment in clean energy in Q3 was $1.7bn, down 58% from the corresponding quarter of 2015, with the biggest transactions being $396m and $353m secondary share issues by, respectively, Chinese solar inverter manufacturer Sungrow Power Supply and US ‘yieldco’ NextEra Energy Partners.

Asset finance of utility-scale renewable energy projects in Q3 2016 was $28.8bn, down 49% from the same period of last year, as stated above. The largest financing deals of the quarter were $1.8bn for the 396MW Merkur offshore wind farm in the German North Sea, and $1.2bn for the 299MW Tees biomass project in the UK.

In other technologies, the largest asset financings in onshore wind were the EON Twin Forks onshore wind farm in Illinois in the US, at 278MW and $500m; the SBG Cleantech Ghani solar project in India, at 350MW and an estimated $350m; and the Geotermica Plantanares geothermal project in Honduras, at 35MW and $180m.

Much lower unit costs for PV panels, as well as the cooling of Japan’s solar boom, contributed to the 35% year-on-year drop in small-scale project investment, to $9.3bn worldwide in Q3 2016.

China was, as usual, the largest investing country in clean energy in Q3. However, its total of $14.4bn was no less than 51% lower than it was in the same quarter of 2015 – reflecting a hiatus after last year’s rush to take advantage of incentives that were about to expire. The US was the second biggest market, with investment of $9.5bn, down 40% on Q3 last year.

Bloomberg New Energy Finance will be publishing clean energy investment data for the whole of 2016 in early January 2017. The fourth quarter of the year is often the busiest one, as banks strive to meet lending targets and project developers take advantage of incentive programmes before any year-end changes. 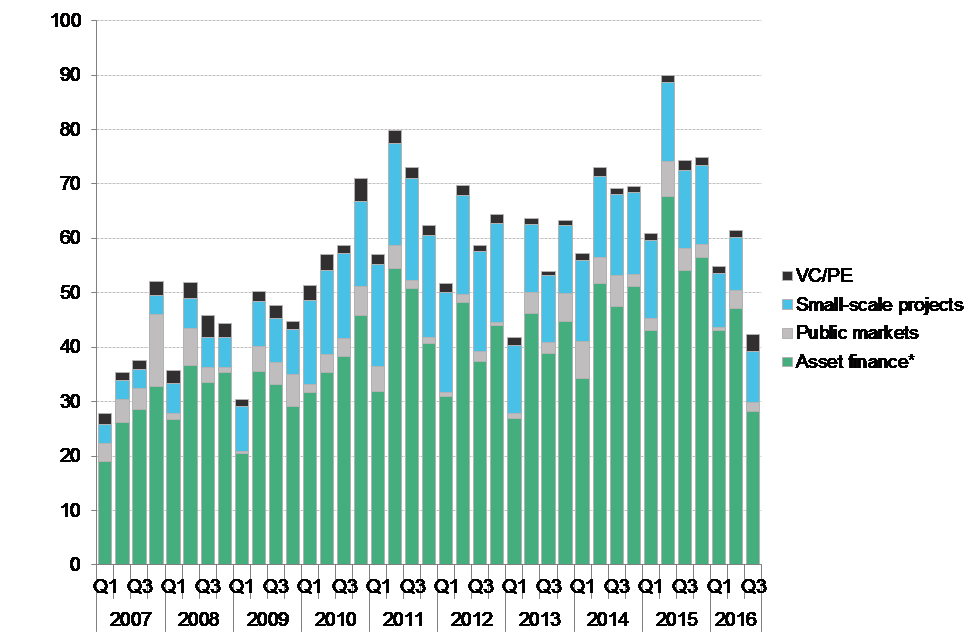 [2] The annual total includes some elements not calculated quarterly, including corporate and government R&D, and asset finance of smart grid projects.