Within the last year, the sun has taken on new-found importance across the cloudy island nation with photovoltaic cells providing as much as a quarter of the U.K.’s daily power supply on some days, from almost no capacity in 2011. And generation can swing sharply as it did last week, when peak generation fell 64 percent from Tuesday to Wednesday before more than doubling on Thursday. 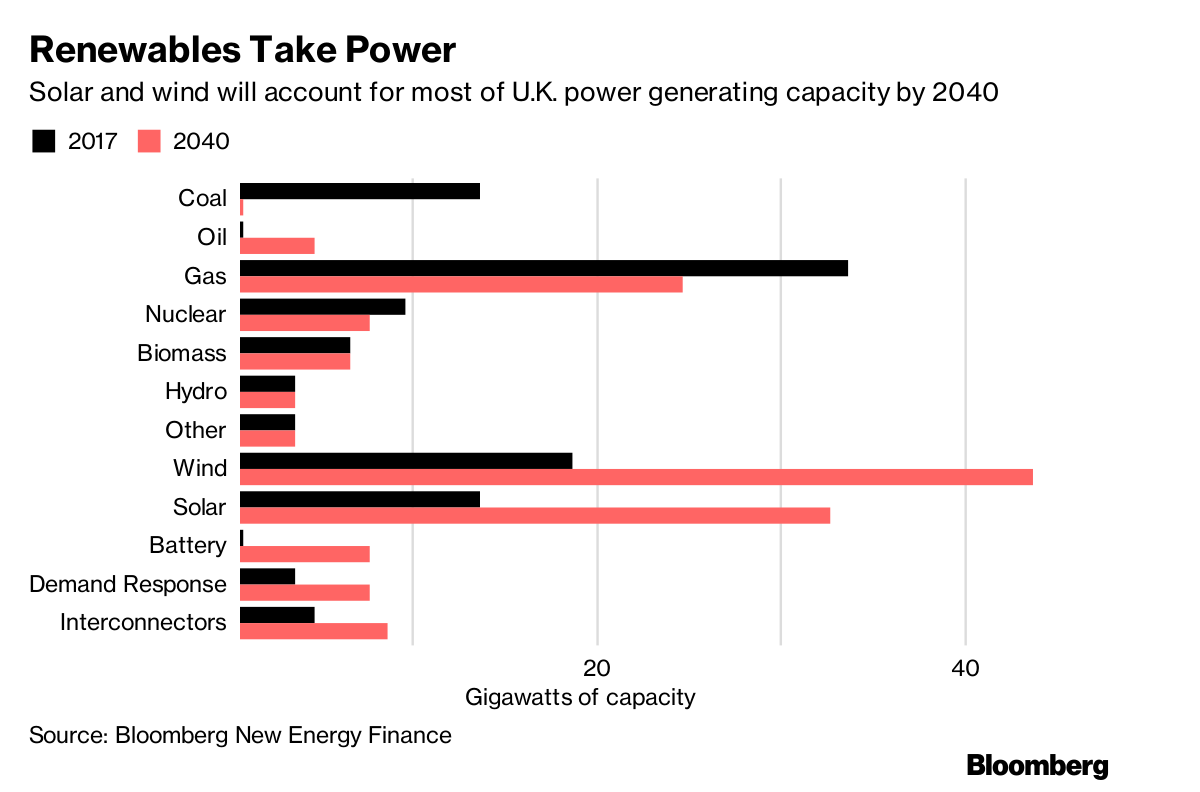 When a cloud blocks out the daylight, solar output can drop to zero almost instantly, meaning fossil fuel-fired power stations need to kick on right away to pick up the slack. That’s causing more unpredictable swings in the price of natural gas and has made the jobs of traders tougher. It’s also opened up profitable opportunities, such as a greater demand for financial instruments that smooth price fluctuations caused by the fickle nature of the wind and sun.

“This year, it’s been a real fundamental shift,” Bryan, a gas trader at London-based Alfa Energy Ltd., said by telephone July 25. “Look at today, 15 percent of our power in the U.K. is coming from solar as we speak, and it’s only going to get better.”

While renewable power generation can save costs and reduce emissions, there’s not yet a battery capable of storing the electricity they produce. Power plants, including those fueled by gas, are paid to be kept on standby for when renewable sources are unavailable.

Take what happened at the start of January, when gas consumption was already high because of seasonal heating demand, and a cold snap battered the continent. With average wind power, available solar supply on Jan. 1 at its lowest daily peak in nearly a year and nuclear plant outages in France, gas-fired power generation had to increase to its highest level in at least six years. The U.K.’s wholesale fuel price surged to a two-year high.

According to a Bloomberg New Energy Finance analysis, more renewables increases the likelihood of “extreme” swings in the price of power in the U.K. Of all of Britain’s power generation capacity, 13 percent is solar. That volume is forecast to more than double by 2040, and make up 22 percent of the country’s power mix, BNEF said.

As a result, traders are going to have to develop or understand new financial products to manage the risk. In February, Harpenden, England-based Speedwell Weather, which is one of the largest providers of data and weather risk-management software, started a platform called weatherXchange that connects people worried about the effects of weather with companies that sell derivatives to manage it.

“The weather market has been on a relatively low-growth trajectory with a few bumps since 2000, but in the last few years it’s really kicked,” said Stephen Doherty, chairman of weatherXchange. “We now see a wide variety of hedging by energy companies including temperature, rainfall related to hydro, wind and some solar.”

“Any gas your client needs that you haven’t yet bought, is a risk you take,” Gomez said in an interview in London. “Taking into account the increasing amount of renewable generation into the system and that generation is unpredictable, we can see day-ahead price moving massively high and fast.”

Georgi Slavov, head of qualitative research at London-based commodities broker Marex Spectron, said the change is a long time coming. He prepared for the looming risk by forming an in-house weather research desk in 2014.

“I’ve been saying this for years,” he said a briefing at the company’s London office July 19, referring to the increasing emphasis on studying renewable output. “The edge for traders is now in knowing the weather.”