This could be the first year that sustainable debt issuance is not higher than the year before.

Nearly $750 billion of sustainable debt instruments — including sustainability-linked bonds, green bonds and green loans — were issued in the first half of 2022. The comparable number last year was $900 billion. Unless there is big spike in the second half, a dip in issuance is expected this year, according to the latest outlook from BloombergNEF.

“There are two factors driving the slowdown. Concern over greenwashing is dampening sentiment, and so is the wider macroeconomic environment of rising interest rates,” said Kyle Harrison, head of sustainability research at BNEF. 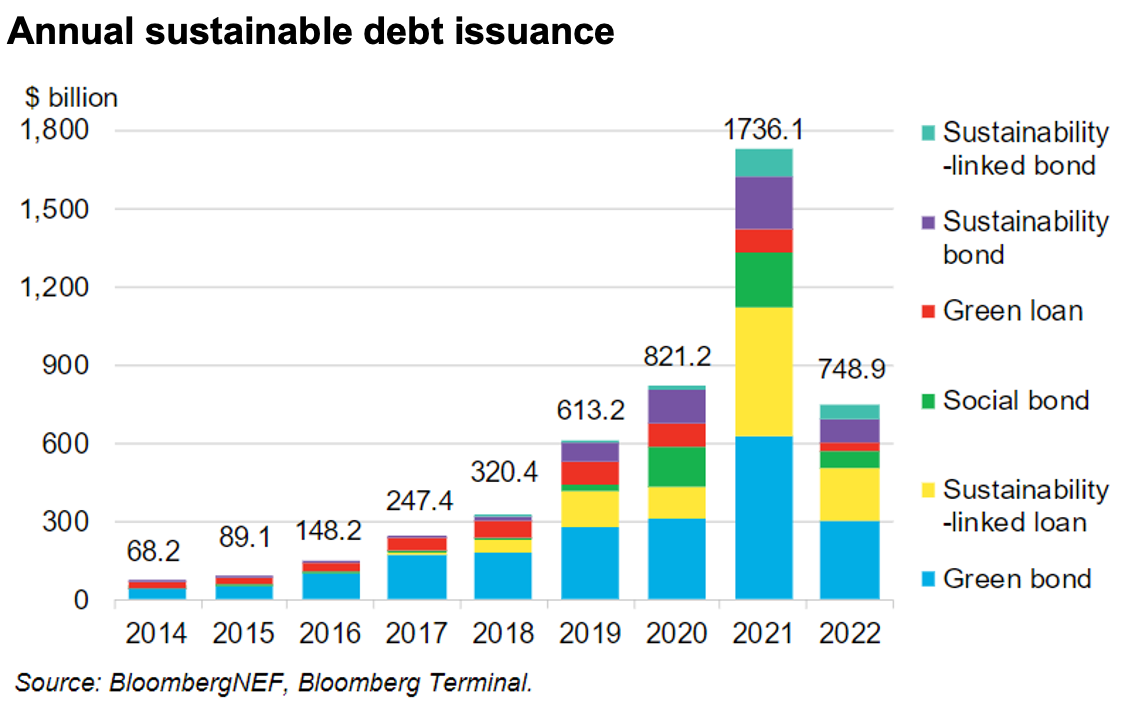 Green bonds made up 41% of the sustainable debt market in the first half of the year, at over $300 billion. The bonds were offered in 34 currencies, compared to 36 over the course of the last year. 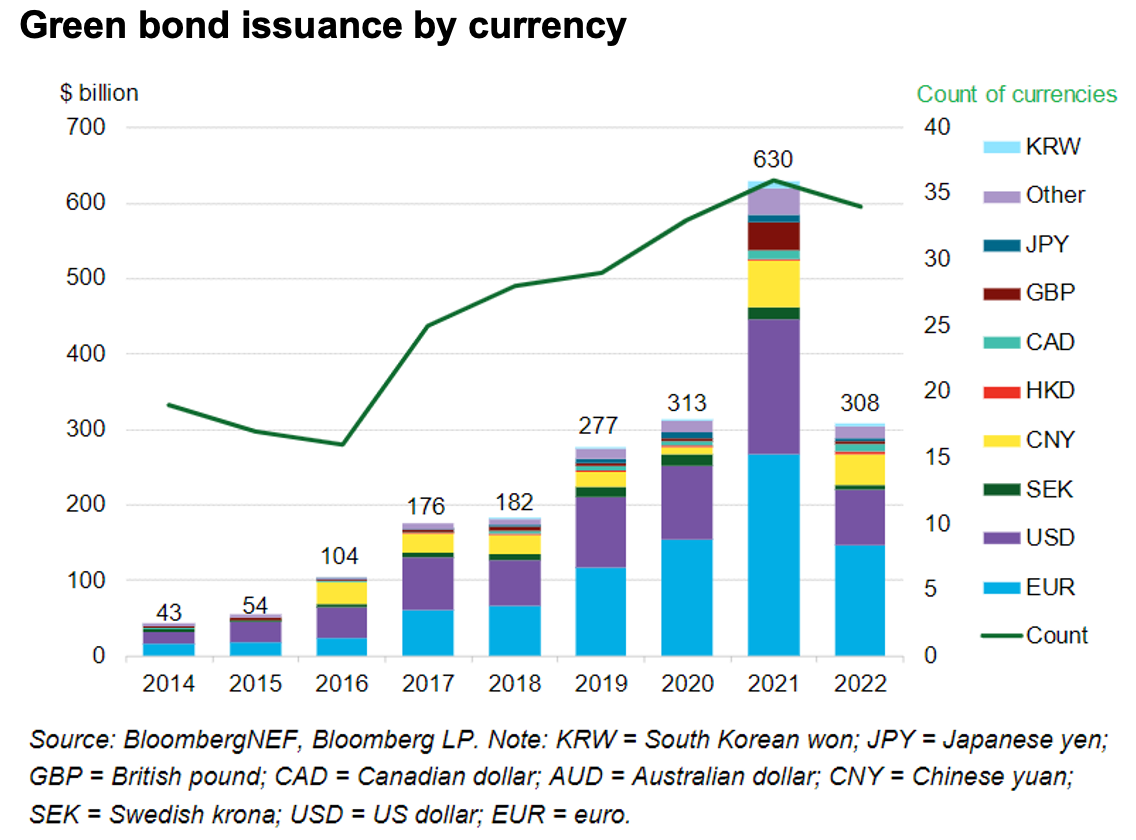 Meanwhile, global renewable energy investments reached a new high of $226 billion in the first half of 2022 — up 11% from the same period last year. Solar continued to be the dominant sector, attracting $120 billion.

BNEF’s Renewable Energy Investment Tracker 2H 2022 also details mergers and acquisitions in the sector, as well the biggest deals. The US was the most active market in the first half of the year in terms of deal count. 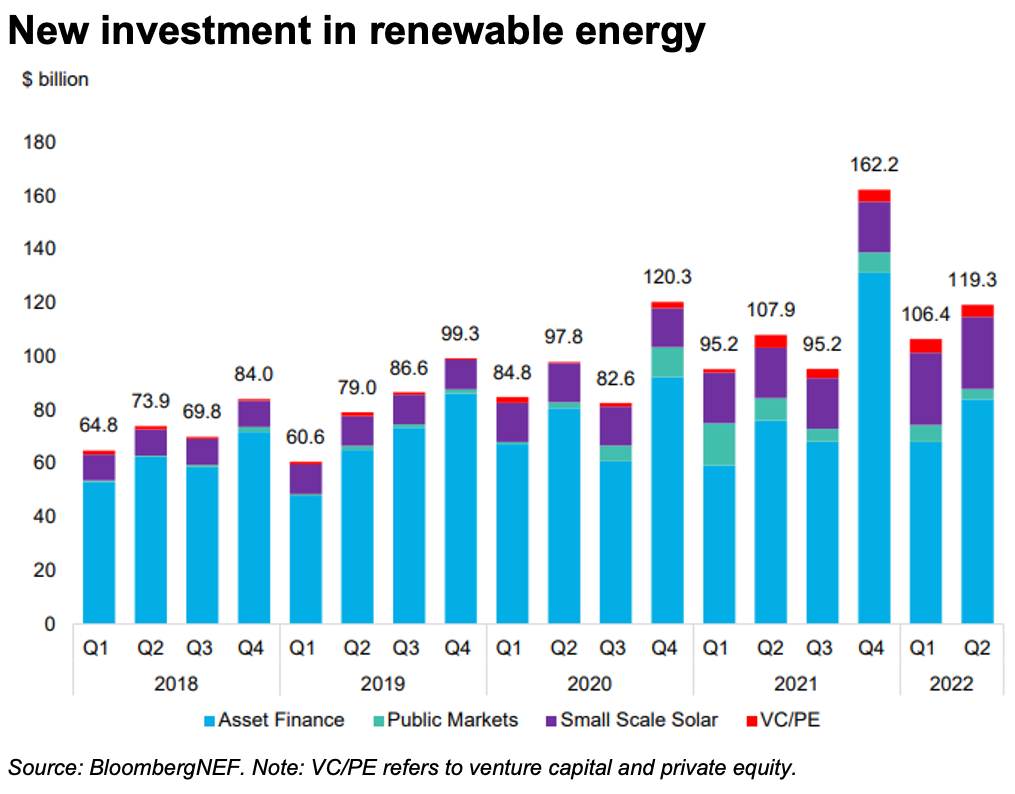 There was excitement in the US on the surprise breakthrough on climate legislation in the form of the Inflation Reduction Act.

“As successor to the Build Back Better bill, the Inflation Reduction Act would provide at least $369 billion in support to energy transition technologies. This would represent an unprecedented long-term effort from the US to address climate change,” wrote Ethan Zindler, head of Americas at BNEF, in the report US Climate Bill Has Few Devils, Many Angels in the Details.

If passed, the sectors the bill would support include electric vehicles, batteries, battery materials, nuclear power and hydrogen.

Carbon markets must significantly step up both their size and ambition if they are to play a major role in decarbonizing the global economy, Bo Qin, BNEF’s lead carbon analyst, wrote in Sink or Swim: Carbon Markets Must Expand to Be Impactful.

There are currently eight major compliance carbon markets around the world and all of them need to improve.

The biggest market by traded value, the European Union Emissions Trading System (EU ETS), is negotiating the details of the so-called Fit for 55 plan, which aims to drive a 55% reduction in the bloc’s emissions by 2030, relative to 1990 levels. California’s cap-and-trade program, the largest market by traded value in the Americas, is redesigning its market to reach carbon neutrality by 2045.

The UK and another US market, the Regional Greenhouse Gas Initiative (RGGI), are also updating their programs. The other major markets — New Zealand, South Korea, China and Australia — are looking to strengthen their impact as well.

“A well-functioning carbon market, referred to as an ‘Olympic pool’ in BNEF’s analysis, is broad and deep. Such markets have high ambition and a large scope to enable the most decarbonization,” Qin said. 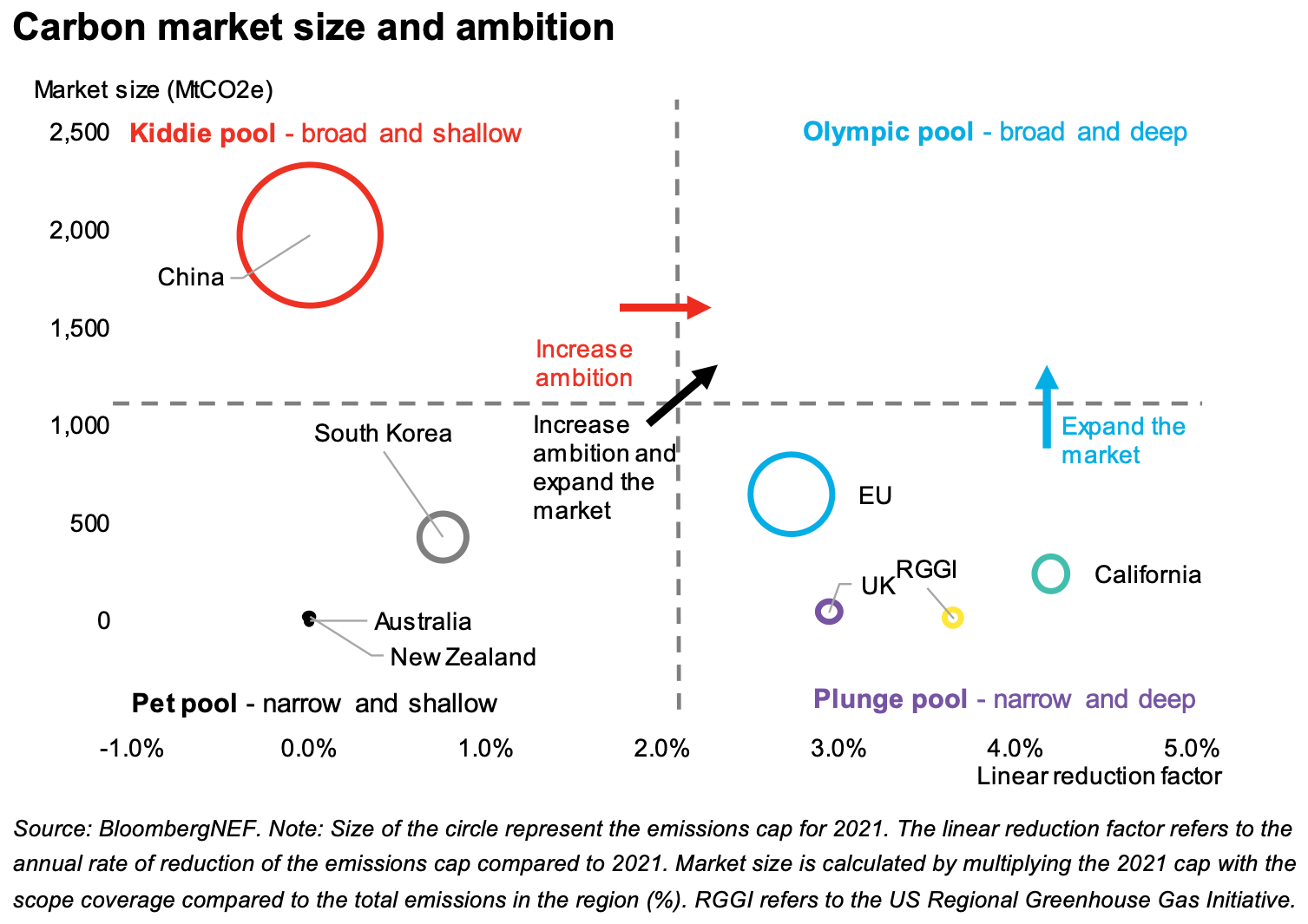