Tesla Inc. leads the pack among automakers offering the safety features that are making vehicles more autonomous, according to a report by car-shopping researcher Edmunds.

Volvo Cars and Honda Motor Co. round out the top three carmakers that Edmunds ranked by the prevalence within their lineup of adaptive cruise control, automatic parking, blind-spot detection and lane departure warning. Companies score higher if the features are standard rather than optional. Such safety offerings are in more than 60 percent of models this year, compared with less than a quarter in 2012, according to the report. 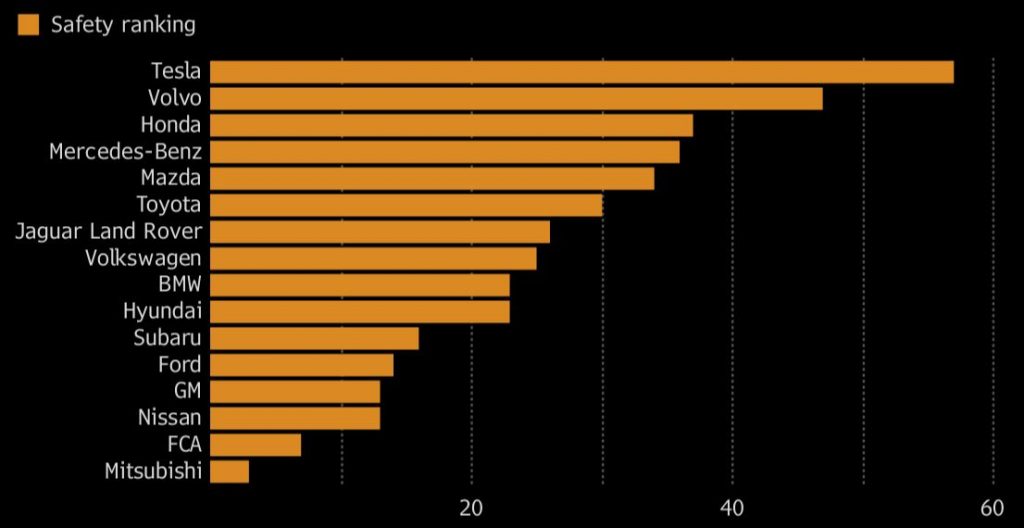 Methodology: For each autonomous feature, a score of 3 for standard, 1 for optional or 0 for NA was assigned to each model trim level for 2017. Scores were aggregated and divided by the maximum potential score to determine and automaker ranking. Source: Edmunds.

“Active safety features are coming faster than we thought, and on a wide variety of vehicles,” Edmunds analyst Jessica Caldwell said in an interview. “These features are the stepping stones to fully autonomous driving.”

Luxury models like Tesla’s Model S and Model X are most likely to incorporate autonomous safety features, while pickups tend to have the fewest offerings, Edmunds said. More than half of drivers surveyed by Edmunds said they’d pay extra for blind-spot detection and pre-collision systems, though consumers’ enthusiasm for other features was more muted.

The report also found that millennials, who make up roughly 30 percent of the adult population but only 11 percent of new car sales, are more receptive to autonomous technology than any other age group.

Note: Numbers may not add up to 100 perfect due to rounding. Source: Edmunds.