Global clean energy investment in the first quarter of 2017 was down 17% compared to the same period of 2016, despite higher equity raising from public markets and VC/PE

London and New York, 11 April 2017 – Clean energy investment worldwide totaled $53.6 billion worldwide in the first quarter of this year, down 17% from Q1 2016 but only 7% lower than the final quarter of last year, according to the latest authoritative figures from Bloomberg New Energy Finance (BNEF).

The data show a mix of strong and weak features in Q1 2017. The strong points included $1.4 billion of public market share issues by electric vehicle pioneer Tesla, and the estimated $650 million financing by Enel of its Villanueva photovoltaic complex in Mexico – at 754MW, arguably the biggest solar project to reach this stage anywhere in the world so far.

Jon Moore, chief executive of Bloomberg New Energy Finance, said: “Q1 this year reflects, once again, the declines in average capital costs per megawatt for wind and solar. This trend means that year-by-year it’s possible to finance equivalent amounts of capacity in these technologies for fewer dollars.”

Abraham Louw, analyst, clean energy economics at BNEF, commented: “It was a relatively quiet first quarter for global investment, but it’s too early to assume that 2017 as a whole will be lower than last year. BNEF analysts are currently expecting both wind and solar to see similar – or higher – numbers of megawatts added this year than last.”

Looking at the Q1 2017 data by type of investment, the largest category as usual was asset finance of utility-scale renewable energy projects.[1]  It totaled $39 billion in the first quarter, down 28% from Q1 2016. The biggest projects financed included the 497MW Hohe See offshore wind farm in German waters, at $1.9 billion, and the CPI Binhai H2 offshore wind array of China, at 400MW and $911 million.

In onshore wind, the biggest deal was for the Texoma wind portfolio in the US, at 500MW. In solar PV, the top transaction was Villanueva in Mexico, while in geothermal it was the Supreme Energy Muara Laboh plant, at 80MW and $590 million.

The second largest category of investment was small-scale solar projects of less than 1MW, with a Q1 tally of $10.7 billion, up 8% on the same quarter a year earlier. Public markets investment in clean energy leaped 215% year-on-year to $2.1 billion, thanks mainly to cash calls by Tesla. The EV maker and PV systems integrator raised $977.5 million via a convertible issue, and another $402.5 million via a secondary share issue.

Venture capital and private equity funding of clean energy companies reached $2.3 billion in Q1, up 55%, thanks to string of medium-sized deals involving a wide variety of businesses. The biggest in order were $155 million for Indian wind and solar project developer Greenko, $140 million for US electric bus company Proterra, $130 million for US solar service provider Sunlight Financial, $125 million for India wind developer Hero Future Energies, and $100 million each for US energy efficient window firm View and US solar generator Orazul Energy.

Splitting the figures geographically, Q1 2017 saw declines in investment in the US and China, and a particularly sharp one (down 91% to $1.2 billion) in the UK, where there were no new offshore wind financings to rival last year’s crop. However, German investment was up 96% year-on-year at $3 billion, while France was up 145% at $1.1 billion and Japan up 36% at $4.1 billion.

Developing countries also had varying fortunes in Q1. Indian investment was $2.8 billion, down just 2%, while Mexico was up 47-fold at $2.3 billion and Brazil down 3% at $1.8 billion. In Africa, one of the highlights was the $350 million financing of an 80MW biomass plant in Rwanda by HQ Power. 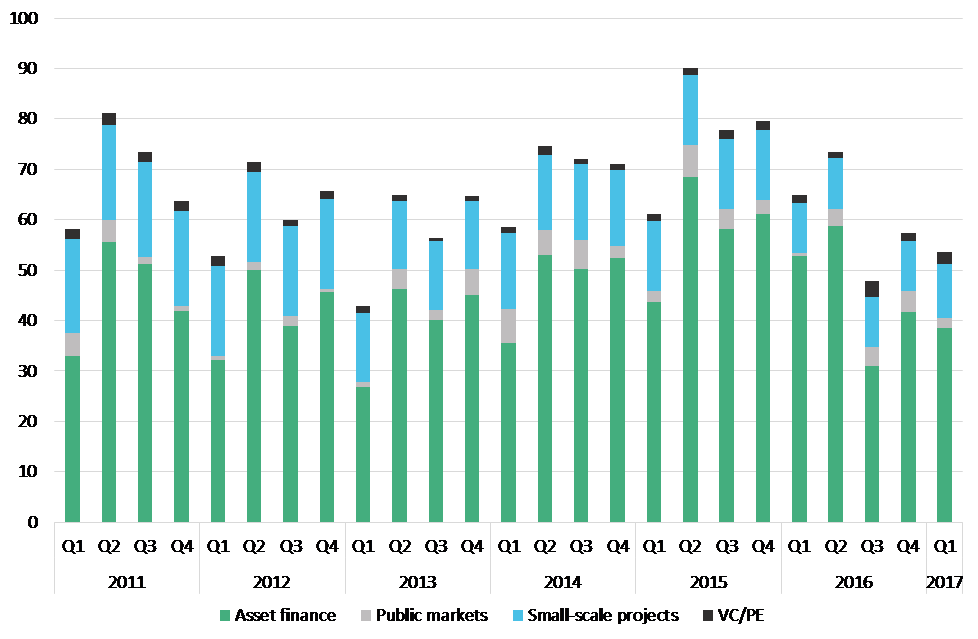 The annual figures include certain categories of investment that are not in the quarterly data – namely corporate and government R&D in clean energy and asset finance of smart meters and energy storage projects.