Investors are hungrier than ever for green bonds, yet companies known for their sustainable prowess — including Tesla Inc. — are choosing to sit out, raising questions about just how valuable the label is.

U.S. non-financial companies have been among the slowest to embrace green bonds — debt that’s designated to only finance eligible green projects — issuing just $4.3 billion last year, a tiny fraction of an overall U.S. corporate bond market that sold $1.6 trillion. U.S. companies are expected to issue $5.2 billion in green bonds this year, meaning a green label for Tesla’s offering last week would have grown U.S. corporate issuance in 2017 by more than a third, according to Bloomberg New Energy Finance data.

Tesla, whose declared mission is to accelerate the world’s transition to sustainable energy, didn’t need the label as much as the nascent green bond market needed Tesla. Green bonds are a way for big companies to highlight their sustainable credentials, and also to help little-known renewable energy companies get the attention of institutional investors with like-minded interests. Tesla doesn’t fit in either of those buckets.

“Even if a company does know what a green bond is, and understands that they could issue one, they may not see any outright benefits in doing so, versus the costs and commitments associated with issuing a green bond,” Daniel Shurey, a green bonds analyst at BNEF, said in an email. 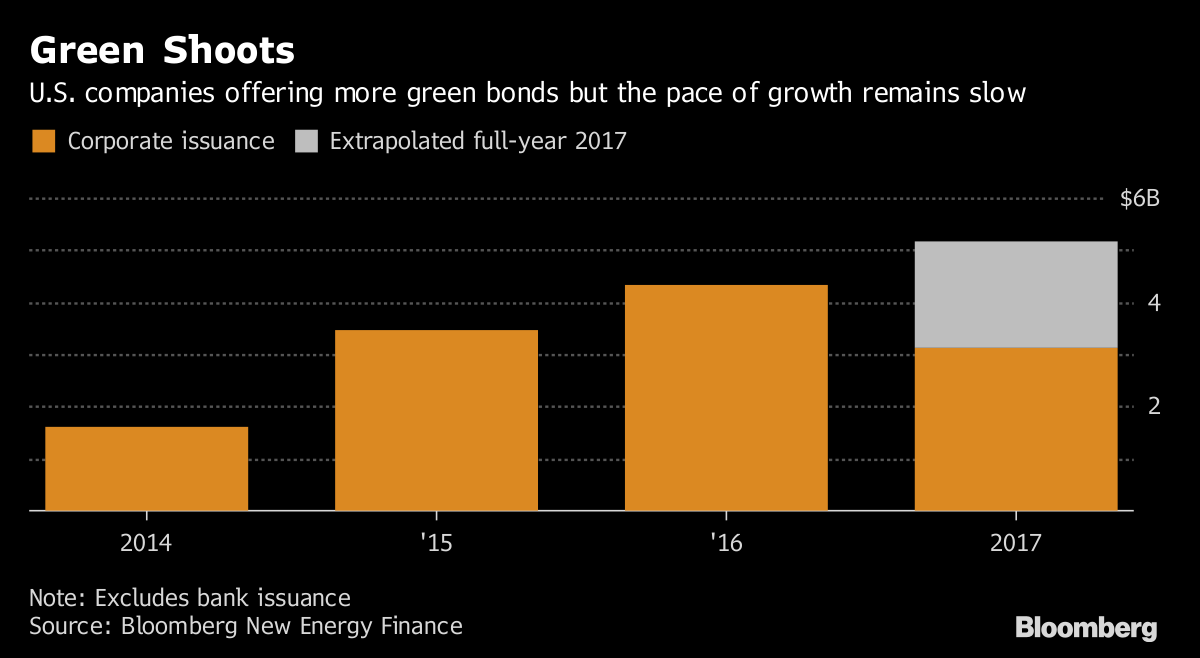 Companies that issue green bonds say they help attract a more diverse and long-term oriented group of investors than they would otherwise. They’re betting the label can improve liquidity, lead to more committed bondholders or at least raise their profile among green investors. Global assets linked to sustainable and responsible investing strategies hit $23 trillion at the end of 2015, according to the Global Sustainable Investment Alliance.

SolarCity Corp. was one of the most frequent issuers of green bonds before Tesla bought it in 2016. The company used the offerings as a way to raise low-cost money directly from environmentally friendly investors.

Palo Alto, California-based Tesla didn’t comment on why it chose not to designate the recent offering as green. But with the company led by Chief Executive Officer Elon Musk already a household name in zero-emission automobiles, it may not have needed to spend the extra money and time to snag the certification.

Interest was high for Tesla’s debt sale regardless, with the B3/B- rated deal aimed at supporting production of its mass-market Model 3 electric car increased to $1.8 billion from the original $1.5 billion. The 5.3 percent coupon was a record low for a bond of its rating and maturity, according to data compiled by Bloomberg.

Costs to certify an offering as green can vary significantly. Sean Kidney, chief executive and co-founder of the Climate Bonds Initiative, estimates annual certification costs at between $18,000 and $41,000. Tesla choosing not to label its bond green was a “missed opportunity” for a fledgling sector hungry for another marquee name, he said.

“At the very minimum issuing green bonds for Tesla is a way to highlight its obvious green credentials to an investment community that is thirsty for green bonds,” said Kidney, whose London-based nonprofit aims to grow the environmentally friendly bond market.

Though corporate green bonds continue to lag, issuers globally are expected to sell a record $131 billion green bonds this year, up from from just $5 billion in 2012, BNEF data show. The pickup has been led by development banks, municipalities and sovereign issuers who’ve jumped into the market to meet global climate change goals.

Investors with more than $11 trillion in assets have signed onto the Paris Green Bonds Statement, aimed at boosting issuance in the market. Ethical investors, ranging from millennials to public pensions, increasingly seek out the bonds as a way to offset broader climate risks in their portfolios. Many green offerings are several times oversubscribed and underwriters report rapidly filling order books for green bonds.

Corporate green bonds have taken hold more quickly at European companies, as issuers there face more pressure from central banks and institutional investors to help lower carbon emissions. In the U.S., companies have been more hesitant amid concerns about backing up their green credentials legally or being accused of “greenwashing,” or trumping up their commitments to clean energy. 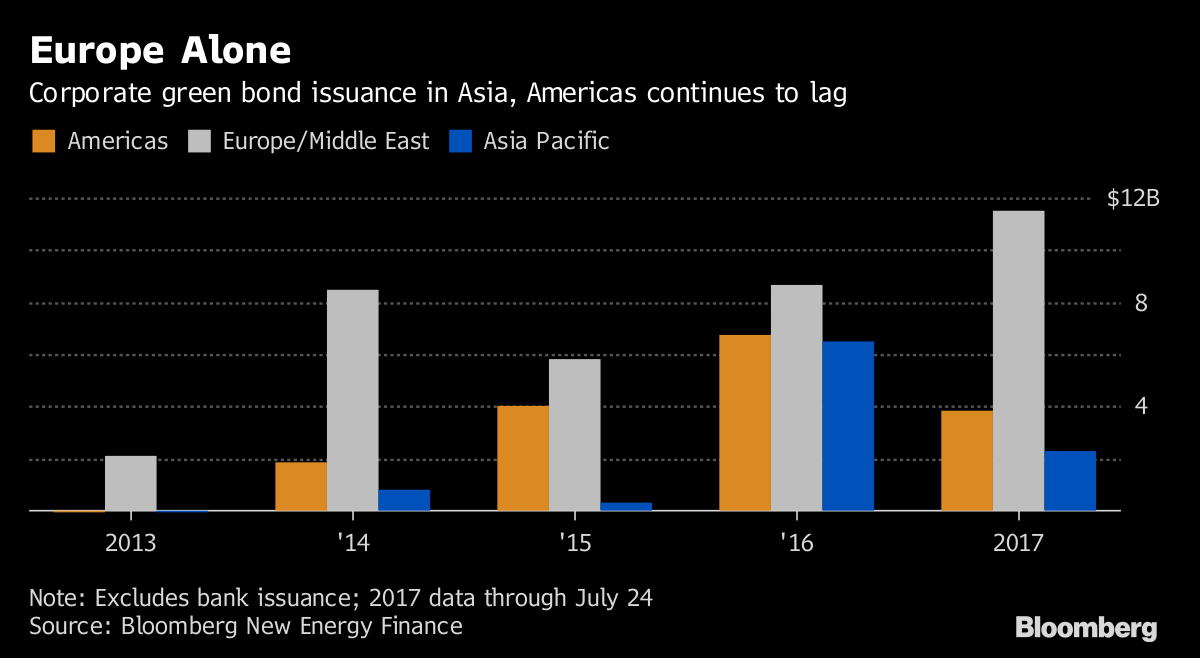 A handful of other automakers including the finance arms of Hyundai Motor Co. and Toyota Motor Corp. have issued green bonds to fund consumer purchases or development of electric vehicles. In those cases, green investors may have needed the label to see that the proceeds were going to projects they supported.

“There is a tacit acceptance by green bond funds that their investible universe is, at least at present, limited,” Alastair Sewell, a senior director at Fitch Ratings’ fund and asset manager rating group in London, said in an email. “In the case of Tesla, were a green bond fund to consider Tesla sufficiently ‘green’ in and of itself, then it might consider the issue despite it not being a labeled green bond.”