Special purpose acquisition companies, or SPACs, are still a hot ticket right now for the electric-vehicle sector. Though many of the companies that went public via this route haven’t fared especially well the last few months, there are still plenty more planned.

The latest data from BNEF shows 13 EV-related SPACs that have been completed, and 14 more pending expected acquisitions in the second half of 2021. This includes companies involved not just in making vehicles themselves, but also in the EV battery supply chain and charging infrastructure.

The interest in this approach shouldn’t be surprising — most parts of the EV value chain are quite capital-intensive, and it’s a long road between investor slide decks and pilot projects to factories cranking out thousands of vehicles or batteries every week. SPACs have proven a successful way of raising the money needed for these companies to scale up their activities, even before many of them have yet to generate substantial revenues. 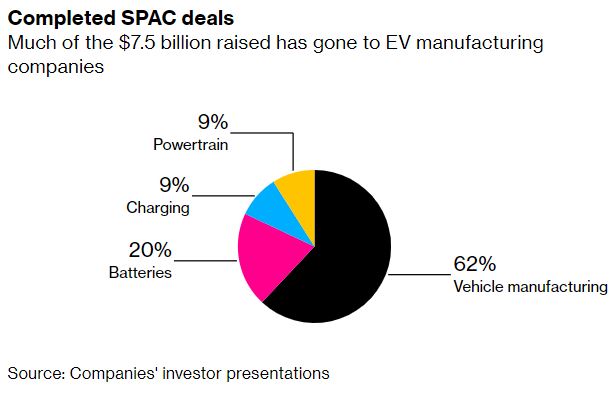 The 13 EV-related listings via SPACs so far have raised about $7.5 billion. Most of these were companies planning on making their own vehicles, such as Nikola, Lordstown Motors and Fisker. These manufacturing companies led the number of listings (seven) and raised the most cash ($4.5 billion).

The 14 pending EV manufacturing SPACs aim to raise a combined $11.8 billion. Lucid Motors is in that group — it’s looking to bring in more than $4 billion in cash, which would make it the largest EV-related SPAC to date. 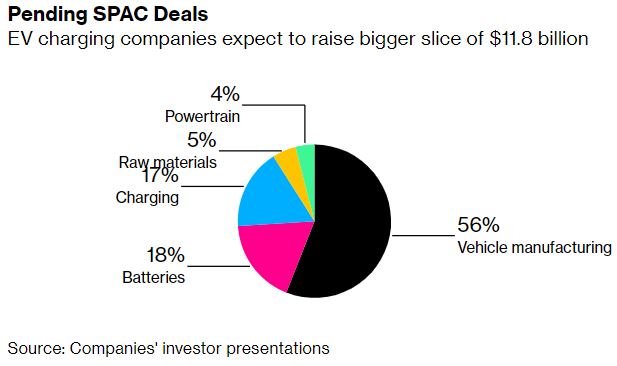 One interesting angle to the EV-related SPAC story has gone largely overlooked: quite a few of the EV charging infrastructure companies missed out on the SPAC bonanza. This is because there was an early wave of consolidation in charging companies over the last few years in which many of the leading players were acquired by oil and gas companies.

This isn’t necessarily a bad thing — a big parent company can also provide the funds to significantly expand these companies’ businesses. But with the money from the public markets flowing quite generously right now, it does feel like many of the companies recently acquired by energy majors may be wondering if they got the timing wrong.

It also means that this segment of the EV industry is somewhat underrepresented in the public markets. BNEF tracks over 200 publicly listed equities with high exposure to EVs, from raw materials through to vehicles and chargers. Of those, only 7% of the listed companies are in the charging infrastructure category. That is starting to change, with some charging companies that have gone the SPAC route, including ChargePoint, EVgo and Nuvve. There are several more pending, including Tritium, EVBox, Wallbox, and Volta.