As the likes of Shell and ExxonMobil continue to generate bumper profits this year, the oil and gas industry’s windfall stands in stark contrast to two crises gripping the world: soaring inflation and climate change.

Shareholders are certainly reaping the benefits of the record earnings in the form of buybacks and dividends. But the planet would gain from oil and gas companies spending more to lower their carbon footprint, specifically methane emissions.

The oil and gas sector accounts for around a quarter of methane emissions from human activity. Reducing the amount of this greenhouse gas that is released into the air could be key to limiting global warming in the near term.

While methane hangs around in the atmosphere for less time than carbon dioxide – around 12 years compared to hundreds of years for CO2 – it is more potent when it comes to trapping heat. Methane’s global warming effect is around 83 times stronger than CO2 over a 20-year period, and 30 times more powerful over a 100-year timescale, according to the UN Intergovernmental Panel on Climate Change.

Here are four charts from BloombergNEF laying out the methane problem, and how the oil and gas industry is responding.

1. The scale of the global methane problem

Methane emissions are generated by both natural sources, such as microbes in wetlands, and human activity. The largest source of anthropogenic methane emissions is agriculture, followed by the energy sector. 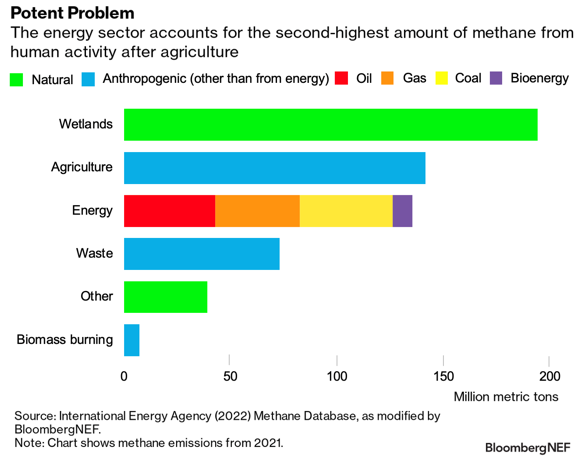 Growing recognition of methane’s role in the climate crisis culminated in over 100 countries signing the Global Methane Pledge last year, a non-binding commitment to cut collective methane emissions by 30% by the end of the decade, compared to 2020 levels.

However, China, Russia, India and Iran, who are among the top five emitters of methane from the energy sector globally, are notably absent from the list of signatories.

At the corporate level, the Oil and Gas Climate Initiative, whose members include BP and Chevron, has laid out a target for companies to lower the ‘methane intensity’ of their operations to under 0.2% by 2025. This refers to emissions as a percentage of natural gas that goes to market, and is a stepping stone to generating “near zero” methane emissions by 2030.

The oil and gas industry was responsible for 82.5 million metric tons of methane emissions last year, or around a quarter of the manmade total, according to data from the International Energy Agency. That’s up from 80.4 million tons in 2015.

2. Where methane is coming from in the oil and gas sector

Methane emissions are a persistent problem for oil and gas companies and, unlike CO2, are almost entirely Scope 1 emissions from their own operations. Around 80% of the sector’s methane emissions come from the upstream segment – in other words, onshore and offshore oil and gas production.

Natural gas is often a by-product of oil extraction. If it is uneconomical to use or sell – for example, if there is insufficient pipeline infrastructure for transportation – developers opt to burn this gas or vent it into the atmosphere. Some gas is also flared for safety and maintenance reasons.

While burning gas converts it into carbon dioxide and water, defective or inefficient flaring equipment can see methane released directly into the air instead. 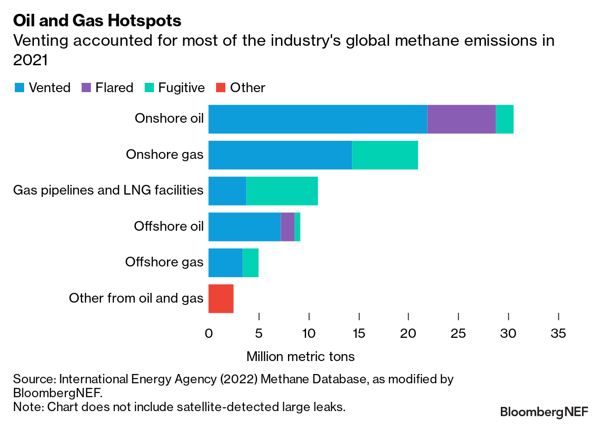 Venting and flaring accounted for 64% and 11% of the oil and gas sector’s methane emissions, respectively, in 2021. The remainder came from unintentional leakages, known as fugitive emissions, escaping from valves or improperly sealed equipment.

In order to address the methane problem, oil and gas companies must first be able to accurately quantify the scale of the problem.

Methane emissions are difficult to track and consistently under-reported. Getting over this initial hurdle will entail increased spending on advanced methane detection and quantification technologies, including sensors, drones, aircraft and satellites.

BNEF expects the size of the oil and gas methane detection market to reach $918 million by 2025. Around 85% of spending will be concentrated on upstream activities, as this is where the vast majority of emissions occur. 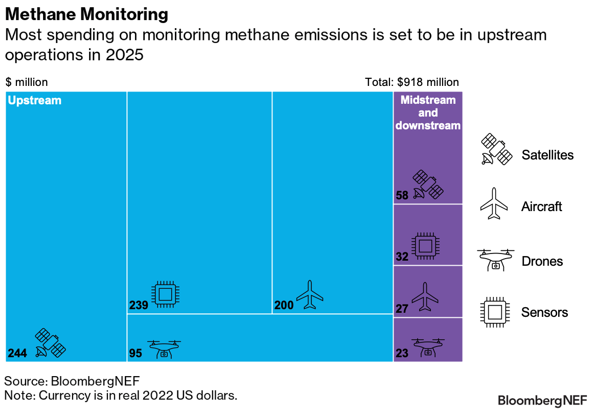 The forecast market size sits against an estimated total addressable market of $14.9 billion. The large discrepancy reflects a relatively small number of companies having set methane targets thus far, and these emissions receiving less regulatory attention outside the US and Europe.

“Detecting and quantifying methane is only a part of the solution,” says Stephanie Diaz, an analyst in BNEF’s technology and innovation team. “To actually reduce methane emissions, companies will need to replace old equipment and invest in technologies that can recover methane.”

Based on average natural gas prices over the past five years, around 41% of the oil and gas sector’s methane emissions can be abated at no net cost if the captured gas is sold, according to the IEA.

4. US is well positioned

North America is set to dominate global spending on advanced detection of methane in the oil and gas industry. This will be driven by the large number of assets that need monitoring, particularly in the Permian, Anadarko and Appalachia basins in the US, as well as regulatory pressure and corporate targets. 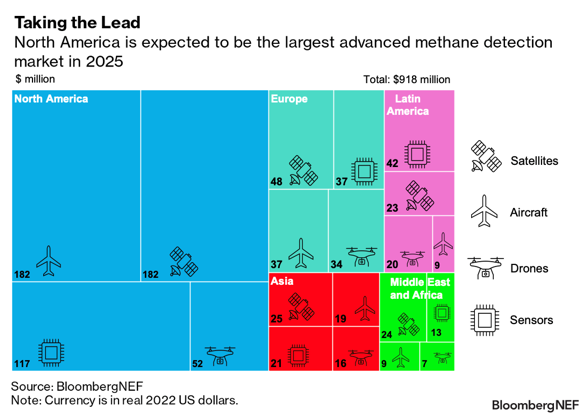 The US, Canada and Europe have the most stringent regulations with respect to methane, and publicly traded oil and gas companies also face investor pressure to ‘demethanize’ their operations.

North American producers have a unique opportunity, particularly as most startups and service providers focused on advanced monitoring are based in the region. Natural geography also means aerial surveillance and satellite monitoring is easier than for other parts of the world.

Oil and gas companies in North America could leverage this competitive advantage to offer a differentiated, ‘greener’ product in the form of low- or zero-methane gas.

Further momentum could come in the US from the Inflation Reduction Act. It uses a carrot-and-stick approach, with $1.5 billion of incentives for methane monitoring and mitigation, and penalties for owners and operators of oil and gas facilities for methane emissions above a certain threshold.