There are many routes to achieve net-zero emissions by 2050, but none will be easy, and no single pathway is set in stone. Despite the uncertainty, all routes have one thing in common: existing technology needs to be deployed rapidly this decade, be that wind or solar energy, or the intense electrification of heat and the transport sector. In the two decades between 2030 and 2050, decarbonization will have to accelerate in harder-to-abate sectors, and new technologies such as hydrogen, CCS and small modular nuclear have to be rolled out to complement clean power.

In BloombergNEF’s New Energy Outlook 2021, three climate scenarios are presented that meet net-zero emissions and keep global average surface temperatures well below two degrees above pre-industrial levels. The second of them, BloombergNEF’s Gray Scenario, describes a pathway that is dominated by clean power, but also assumes carbon capture and storage, or CCS, allows coal and gas to continue to play a significant role, particularly in heavy industry and the power sector. There is also a switch to electricity in the end-use economy and a bigger role for bioenergy. In addition, there is a small role for carbon removals that offset residual emissions from CCS, “blue hydrogen” and greater recycling as well. Within the Gray Scenario, the following solutions play a role in abating emissions in line with the Paris Agreement: 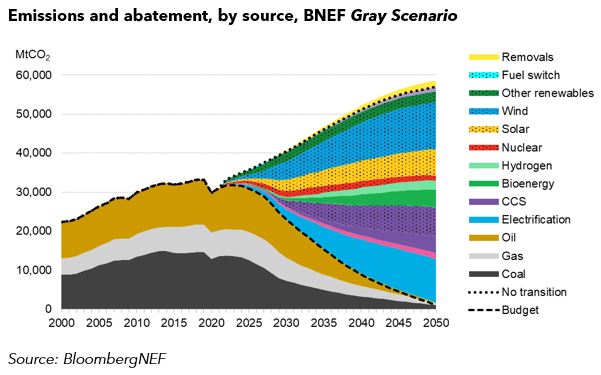 Carbon capture and storage has a prominent role in the Gray Scenario to help reach net-zero emissions. CCS technologies can be deployed across a variety of processes that emit carbon dioxide, mainly in industry and for power generation. The best performing CCS systems can capture as much as 90% of emissions from a power plant or furnace. In this scenario, CCS captures 174 gigatons of CO2 from the combustion of coal, gas and oil across the entire outlook. More than half of emissions captured in 2050 come from the power sector. A further 30% comes from fossil fuel use in smelting, refining and recycling in industry. About 11% of captured carbon comes from blue hydrogen production and some 1% from on-board capture in shipping. 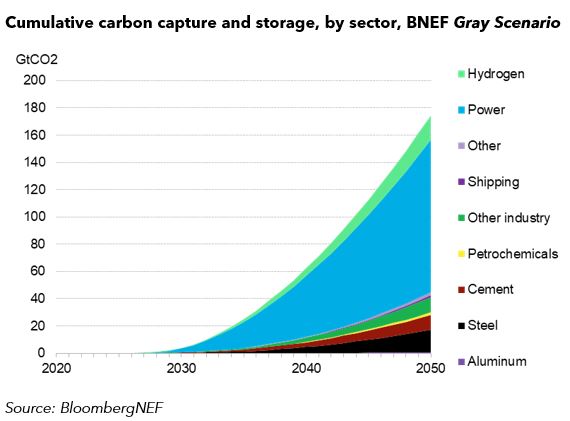 BNEF doesn’t assume any hydrogen production through electrolysis in its Gray Scenario, therefore the power sector sees the smallest overall system size across all sectors. Nevertheless, there is a significant role for fossil fuel power with carbon capture and storage as it operates as low-carbon dispatchable power generation to complement renewables. Deploying CCS also has the added benefit of preventing the early closure and stranding of existing fossil fuel-fired power stations. Coal-and gas-fired power with CCS accounts for around a quarter, or 7.8 terawatts, of the 31 terawatts total power capacity installed in this scenario by 2050. 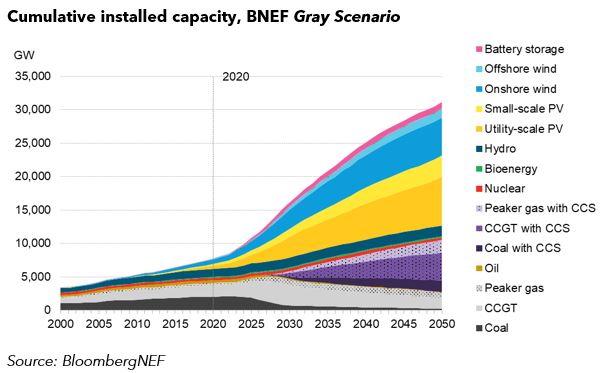 Annual investments will need to more than double in the Gray Scenario from around $1.7 trillion per year today, to somewhere around $3.1 trillion on average over the next three decades. Comparing BNEF’s three scenarios, overall investment is lowest in the Gray Scenario. This is because it uses the least hydrogen, and investment required for fossil-fuel and CCS infrastructure is lower than what is needed to produce 1,318 million metric tons of hydrogen in our Green Scenario, and build 7 terawatts of nuclear power in our Red Scenario. As CCS offers a renaissance for coal in power generation and industry, and reverses some of the decline seen in gas from 2030, securely storing or utilizing carbon-dioxide long-term will play an important role in this scenario. Nevertheless, CCS only captures 90% of emissions at best, so carbon removals or negative emissions will be important. Some countries might be lacking infrastructure to transport or have insufficient potential to store CO2. Alternatively, these countries could put a higher emphasis on the use of hydrogen or pursue a route where nuclear power and electrolysis plays a more important role.