The approaching US midterm elections could decide whether measures to address climate change are accelerated, stalled or even rolled back.

Right now, the country’s journey to a low-carbon economy looks to be picking up speed, in no small part due to the $369 billion of funding for clean technologies packed into August’s landmark Inflation Reduction Act. The US appears teed up for a renewables boom this decade.

But the future isn’t just green. As countries around the world look to shore up their energy security amid the fallout of Russia’s war in Ukraine, the US is capitalizing on renewed appetite for oil and gas, too.

Here are five charts from BloombergNEF on the future of US energy.

1. A promising opening act for US climate action

The Biden administration’s hard-won Inflation Reduction Act is essentially a welcome step forward for clean energy in the US rather than a panacea for climate action. Nonetheless, its impact will be substantial.

“The law is the biggest climate spending package the US has ever passed, and mature clean power technologies will receive an estimated $128 billion through tax credit extension and expansions,” says Tara Narayanan, a senior associate in BNEF’s US power team. “It provides stability to project planners by making subsidies available for at least a decade and linking the phase-out to country-level emissions.”

Thanks to that increased stability “and a host of other smaller legal tweaks”, Narayanan notes that BNEF expects the new law to boost wind and solar additions in the US by at least 20% through to the end of the decade. 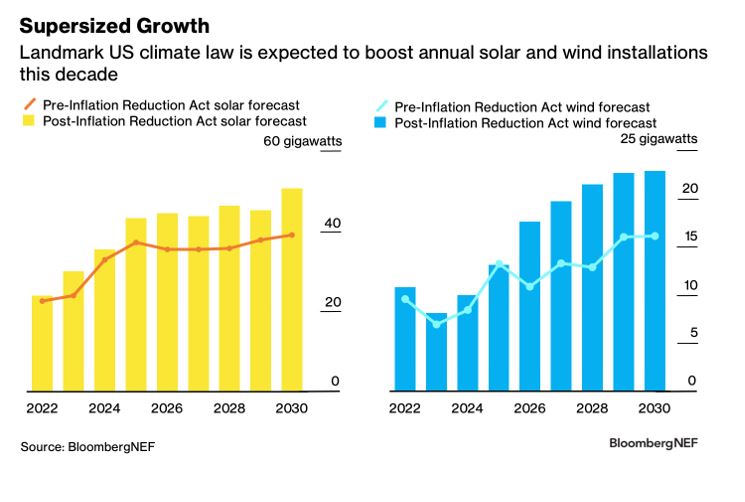 Annual solar build in the US is now on track to top 50 gigawatts in 2030, versus a previous forecast of 39 gigawatts. While there are some near-term uncertainties due to tariff risks, import barriers and supply chain disruptions, appetite for solar is growing. This is particularly true in the residential sector as households look to reduce their exposure to rising power prices and reliance on grid electricity as infrastructure ages and disruptive extreme weather events become more frequent.

Wind power also faces some immediate obstacles, especially supply-chain constraints and bottlenecks in permitting and grid connections. But with the benefits of the new climate law due to ramp up from the middle of the decade, BNEF sees annual build reaching 23 gigawatts in 2030, up from a previous estimate of 16 gigawatts.

2. No time for complacency

Even with the new law expected to turbocharge renewables in the US, further progress is needed. The Biden administration floated a target last year of reaching 80% clean electricity by 2030, which would require anywhere from 65-100 gigawatts of wind and solar capacity to be added each year across 2021-2030. Yet, the country is set to fall short of this range even with the recent legislative tailwinds. 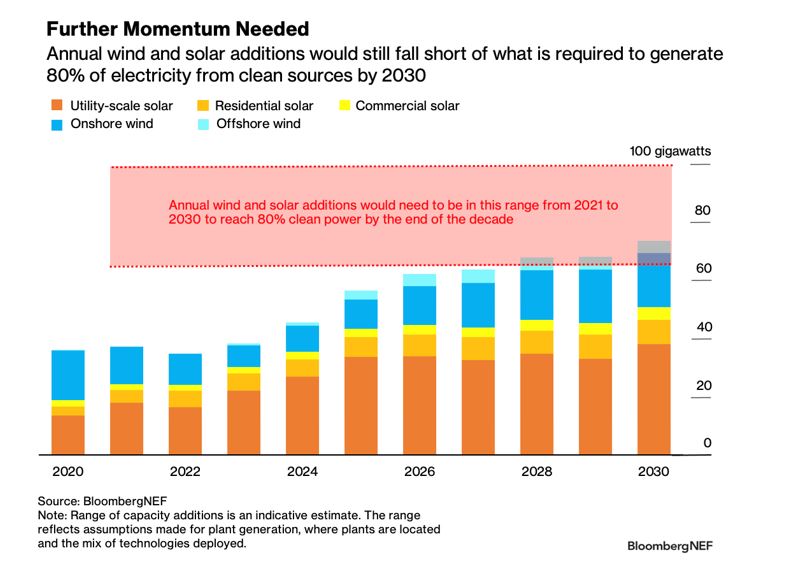 One reason is that while the law does a good job of making clean energy cheaper to roll out, it’s less effective at addressing other hurdles.

“Some of the main barriers to rapid deployment, such as building out inter-regional transmission and bottlenecks in interconnection queue processing, cannot be solved by a subsidy,” says Narayanan. “For onshore wind in particular, grid congestion is a challenge in the markets with the best wind resource, and transmission build will be key for the sector to grow.”

As more renewables projects are built around the world, energy storage will become increasingly important to counter the so-called intermittency problem. The US is the largest storage market right now but was due to be surpassed by China in 2025. However, thanks to the Inflation Reduction Act — which BNEF forecasts will drive an additional 20 gigawatts of storage this decade, equivalent to a 24% increase from previous estimates — the US is now set to hold onto its crown.

The energy storage market has its own supply-chain snags. Even so, installations in the US are forecast to reach a record 5.7 gigawatts this year, bringing total capacity to a little over 12 gigawatts. By 2030, BNEF anticipates the country will have 112 gigawatts of energy storage in place. 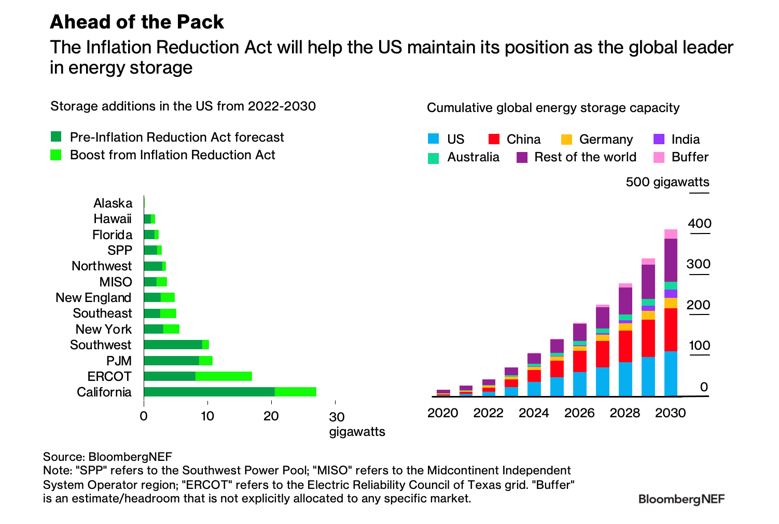 California is the biggest US storage market, a position that will be cemented by the tax credits in the new climate law. Storage is rapidly being deployed across the state to help replace retiring thermal power generation capacity. Meanwhile, households are also investing in batteries to pair with solar panels, reducing their dependence on the grid and vulnerability to blackouts.

The energy momentum in the US isn’t all clean. Oil output is also set to rise as spot and forward prices remain well above what is required to break even, despite recent volatility. US oil producers have indicated prices would need to fall below $50 a barrel for them to reconsider their growth plans.

Even amid recession fears, the impending European Union ban on Russian crude will leave a supply gap that needs filling, and energy security concerns exacerbated by Moscow’s war in Ukraine are also incentivizing upstream investment. 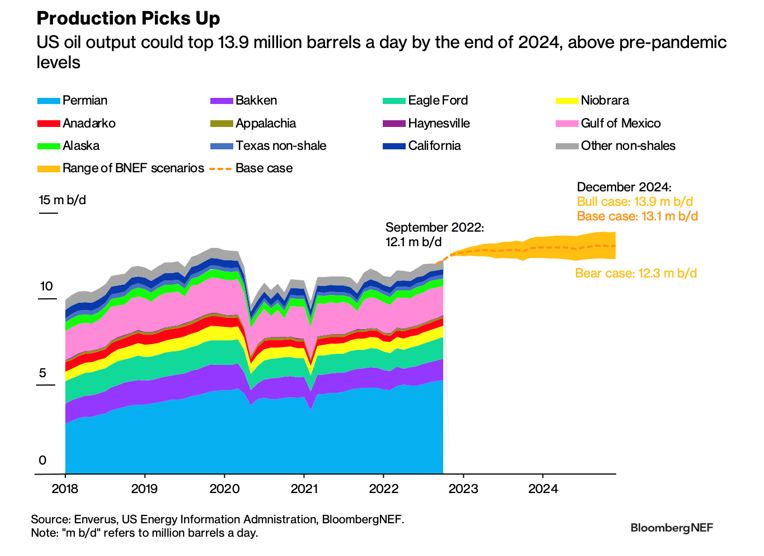 A more bullish outcome could see production reach 13.9 million barrels a day, although Tai Liu, an analyst in BNEF’s upstream oil team, says this is contingent on the easing of supply chain shortages in the oilfield services sector — for things such as personnel and drilling and fracking equipment — and investor support for oil companies to boost output.

“Right now, investors are preferring capital paybacks in the form of share buybacks and dividends more than investing in production growth,” says Liu. “So, many US oil companies are limiting their annual production growth rate to between 0-5%.”

Elsewhere in the world of fossil fuels, the US is capitalizing on higher demand for liquefied natural gas and elevated prices, particularly as Europe looks for alternatives to Russian supply to alleviate its energy crisis. Michael Yip, an associate in BNEF’s global LNG team, points out that Europe’s share of US LNG exports rose to 69% in the first half of 2022, up from 39% last year. “In absolute terms, that is almost two-and-a-half times more than the same period last year,” he says.

While the Freeport LNG outage is weighing on US output right now, the country is edging closer to overtaking Australia and Qatar to become the world’s largest LNG supplier. By 2028, BNEF estimates the US could account for almost a quarter of LNG supply. 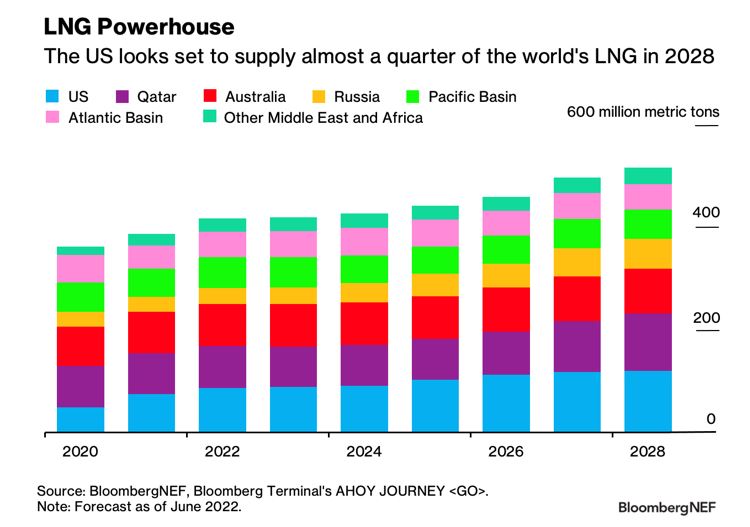 But what’s driving this changing of the guard?

US LNG project approvals have been underpinned by a wave of contract signings, with a record 50 million metric tons of agreements signed from January to September this year. Portfolio players, those that buy LNG from suppliers around the world for resale, have been particularly active. This comes as European buyers have been more hesitant to commit to long-term LNG contracts amid the backdrop of low-carbon transition plans such as REPowerEU.