This Is What the Demise of Oil Looks Like

From giant companies like Exxon Mobil Corp. to OPEC members such as Saudi Arabia, oil producers say their industry will enjoy decades of growth as they feed the energy needs of the world’s expanding middle classes. But what if they’re wrong? There’s a host of reasons to think they might be. Here’s what happens when you test their central assumptions.

The International Energy Agency sees oil demand rising more than 10 percent, to 103.5 million barrels a day by 2040, while companies predict even faster growth.

Traditional Forecasters See Nothing But Growth 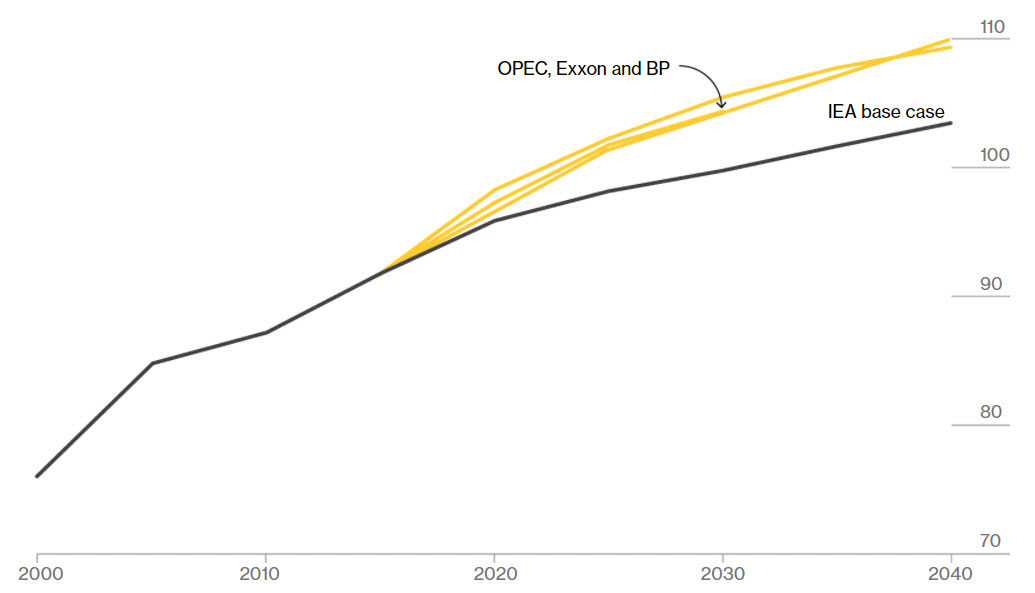 But forecasters don’t always anticipate seismic shifts in technology and policy that could slow demand growth, or even eliminate it altogether in some parts of the economy. Even small changes could add up. Advances in vehicle efficiency, a rise in electric cars, tighter emissions standards and shifts to other fuel sources would result in oil demand much lower than the industry is banking on.

“We cannot even begin to comprehend the transformation in the mobility arena that is coming at us,” Jules Kortenhorst, chief executive officer of the Rocky Mountain Institute, based in Boulder, Colorado, said in an interview. “It’s not a question if it will come, it’s only a question of what the timing of the arrival will be.”

About 60 percent of oil is used in transportation, which is also where the biggest technological changes are emerging.

All over the world, governments concerned about climate change or air pollution are pushing tighter fuel-efficiency standards, or creating low-emission zones for cars and even ships. The exposure of cheating on diesel-emissions test by Volkswagen AG, and similar accusations against other automakers has added to the pressure on regulators to toughen standards.

The proliferation of big data analysis is set to dramatically curb fuel waste, according to the Rocky Mountain Institute. Aircraft being produced today by companies like General Electric Co. can already detect small changes in engine performance, meaning engineers can be sent out to fix any issues and keep them operating at peak efficiency. Smarter navigation technologies allow truck drivers to reduce the distances they travel, while improvements to aerodynamics will enable vehicles to travel farther on less fuel.

These and many other technologies would reduce emissions, while also save money, especially in a world where the International Energy Agency sees oil prices rising from about $50 a barrel now to $80 at the end of the decade, and to above $100 by 2030.

All told, efficiency improvements could eliminate the need for about 11.6 million barrels a day of supply, according to the IEA. That’s about six supertankers of oil every day. Here’s what the future looks like with efficiency gains:

Squeezing More From Each Barrel 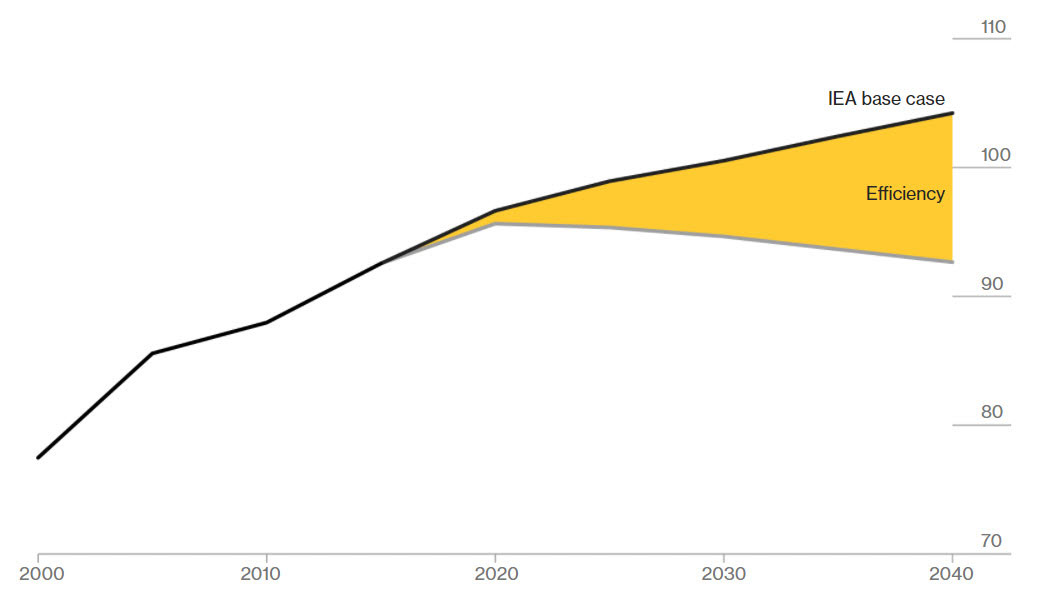 Probably the most noticeable shift in transport will be the electric car. This won’t just be about cars with batteries, but part of the wider trend led by companies including Uber Technologies Inc. and Lyft Inc. toward transportation as an on-demand service in driverless vehicles summoned from your smartphone, according to RethinkX, a think tank based in San Fransisco.

A move away from the current norm of individual ownership of traditional petroleum-powered vehicles toward the sharing of high-tech, possibly driverless cars would have far-reaching economic and social consequences, particularly because they’re being pushed hardest in the fastest-growing major economies. China’s latest auto industry plan sees all new vehicle growth coming from electrics. India plans to sell only electric cars by the end of the next decade.

The Drive to Electric Cars

More than 20 million sales are predicted by 2030

“In a nutshell, the industry is going to evolve more in the next 10 years than in the last century,” said Gilles Normand, head of electric vehicles for Renault SA, in an interview.

If electric cars attain a “cool factor” on a par with the iPhone, the global fleet could expand to 450 million by 2035, from about 1.2 million currently, according to BP Chief Economist Spencer Dale. Adoption of electric vehicles on this scale could take away another 5.2 million barrels per day of oil demand, according to the IEA. 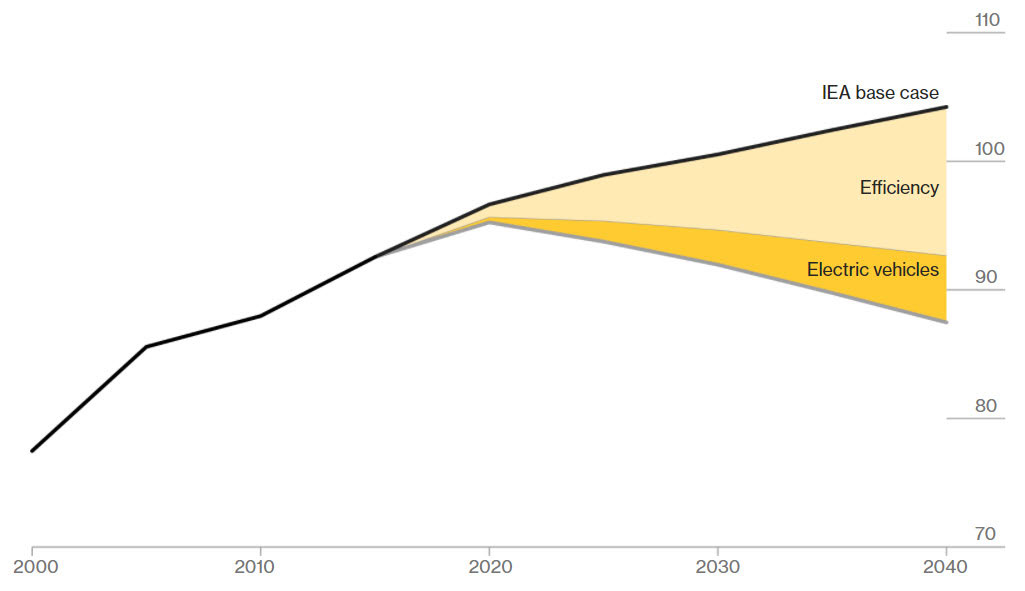 Even as U.S. President Donald Trump wavers over his commitment to the 2015 Paris Accord on climate change, envoys from Europe to China and the Middle East say the shift to a low-carbon economy is now unstoppable.

The Future Is Clean 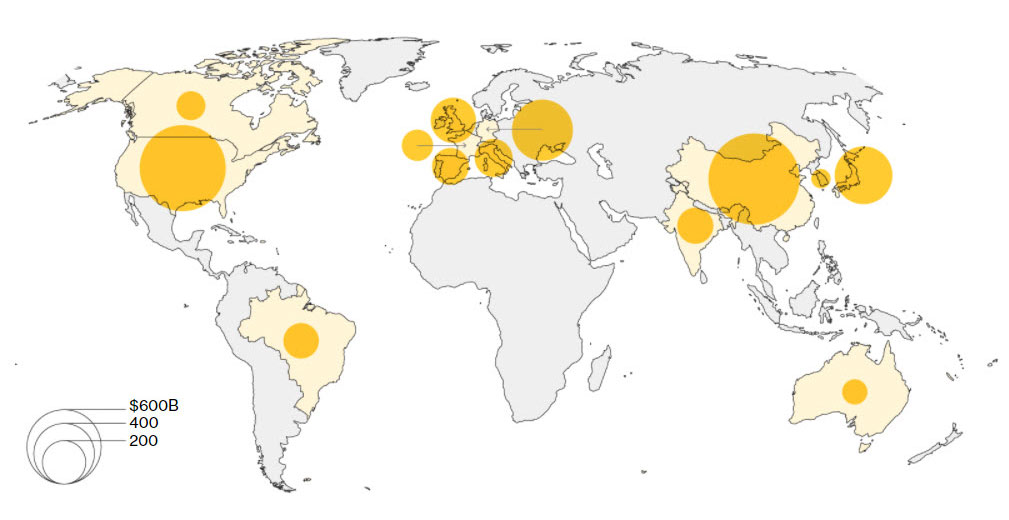 Some major oil companies are reacting to this shift. Royal Dutch Shell Plc, Europe’s largest energy company, is betting on zero-emission hydrogen cars and building liquefied natural gas refuelling stations for trucks in the U.S. and ships in Europe.

Biofuels are also set to take share away from oil in some markets—such as airlines seeking to cut carbon emissions, for which battery power isn’t currently suitable. The growth of bioplastics could also eat away at demand from the petrochemicals industry, which McKinsey and Co. estimates will drive 70 percent of growth in demand for oil through 2035.

Beverage makers like Coca-Cola already pay a few cents more for bottles made from plant-based materials, which won’t add to the growing plastic soup in our oceans.

Widespread switching to alternatives including natural gas and biofuels could displace about 13.5 million barrels a day of oil demand by 2040, according to the IEA. That’s more than double the gains from electric cars. 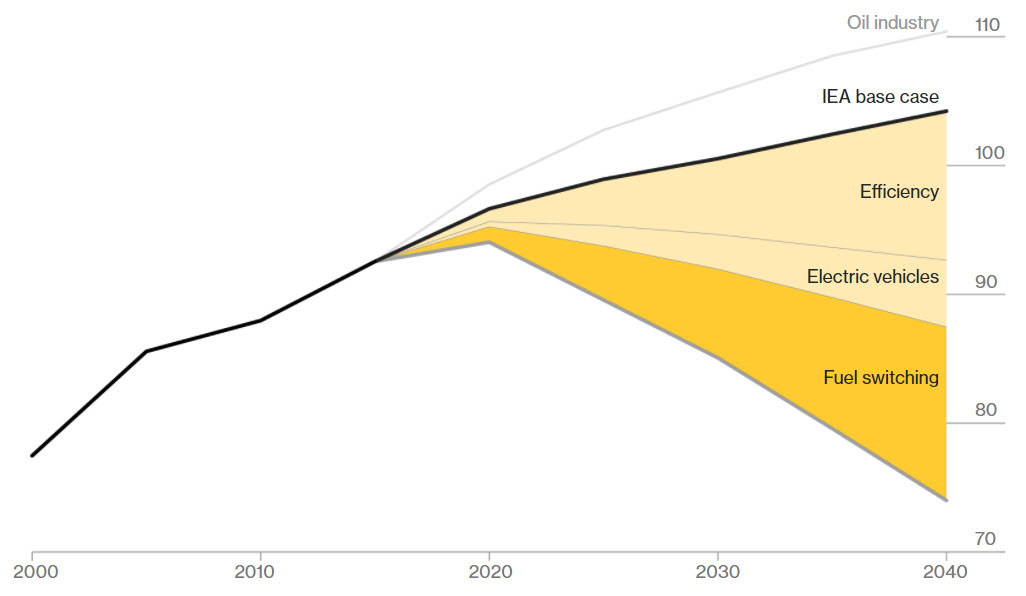 All these things together, which is what the IEA says would be required to limit global warming to within 2 degrees Celsius, would mean oil demand peaking around 2020 and declining by about 20 million barrels a day by 2040. That’s 36 million barrels a day lower than the average oil company forecast for 2040—a gap larger than OPEC’s current production.

Some oil companies have acknowledged the potential for demand to peak sooner. Shell has said oil could peak somewhere between five and 15 years, while Total thinks a surge in battery powered vehicles will cause demand for oil to peak in the 2030s.

A demand shift on this scale would have dramatic consequences for oil producers, who are among the world’s biggest companies today.

“If you take a large bite out of transportation fuels, then suddenly the economics of the whole downstream oil and gas business look dramatically different,” said Kortenhorst.

There may be a lesson in the dismal fortunes of the U.S. coal industry. Demand for the fossil fuel peaked there in 2007 and has gradually declined as power plants switched to natural gas. That triggered a collapse in the value of some of the nation’s largest producers, including Peabody Energy Corp., which is among about 50 coal companies that filed for bankruptcy in recent years. 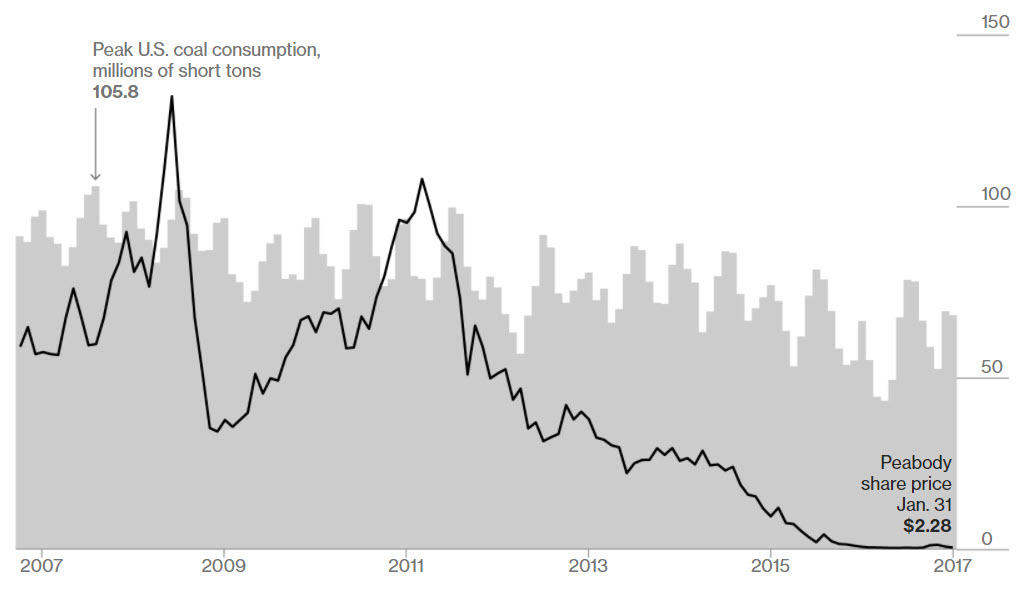 Oil companies now tilting toward renewable energy, such as Norway’s Statoil ASA, are best placed to survive peak demand, said Deutsche Bank AG. Exxon Mobil Corp.—due to its size and “reluctance to change”—is the most vulnerable.

State-run giants of the type that dominate the Organization of Petroleum Exporting Countries are even more at risk and could one day be left with billions of barrels of unwanted crude.