London and Łódź, October 20, 2022 – Europe’s largest coal-fired power plant could replace most of its lignite generation with renewables paired with batteries or lower-carbon thermal capacity, research group BloombergNEF (BNEF) finds in a new report. Such a transition would lower overall power system costs in the Łódź region of Poland, where the plant is located, while maintaining critical energy security.

The Belchatow power station today plays a vital role in the central European energy grid and is the sixth largest coal-fired power plant on Earth. BNEF finds that deploying 11 gigawatts of wind and solar in the region to replace 80% of Belchatow’s “brown” coal generation is possible from a land-use perspective. Alternatively, some 6GW of wind and solar paired with a gas, biomass or waste-to-energy plant could achieve similar output. Its analysis examines the feasibility of deploying lower-carbon technologies and offers a possible transition roadmap to do so. The report was released today by Bloomberg Philanthropies and BNEF in partnership with Forum Energii at an event in the Polish region of Łódź where the Belchatow plant stands.

Local lignite resources in Belchatow are likely to run out latest by 2036, forcing the plant to shut. War and an energy crisis have boosted recent demand for coal but the longer-term outlook for coal and lignite power plants in Europe remains bleak. Lignite generation drops by 75% over 2021-2030 in Poland even under sustained high gas prices, according to the BNEF study. Belchatow supplies a fifth of Poland’s power and sits at the heart of the Polish power system and energy security. The successful transition of the Belchatow coal power plant could serve as an example for coal-regions around the world.

Michael R. Bloomberg, UN Secretary-General’s Special Envoy on Climate Ambition and Solutions and founder of Bloomberg LP and Bloomberg Philanthropies, said: “As the effects of climate change worsen, Europe’s energy crisis and Russia’s invasion of Ukraine only underscore countries’ urgent need to choose clean energy and cut their reliance on fossil fuels. This new report shows a promising path to replacing Europe’s biggest coal-fired power plant with alternative and resilient clean energy sources – and it can serve as an example for coal regions in Europe and globally that are looking to reap the health and economic benefits of clean energy.”

Joanna Maćkowiak-Pandera, PhD, CEO of Forum Energii, said: “The construction of new, low-emission sources in the Bełchatów region must be started as soon as possible in order to maintain the security of energy supply at a high level and reduce electricity prices. Lignite resources in Belchatow are limited in time and will run out soon. This report proposes options for replacing generation with clean capacity that will ensure Poland’s security of supply.”

Maciej Kozakiewicz, Plenipotentiary of the Board of the Łódź Province for the transformation of the Belchatow region, said: “This is an optimistic report in the context of Belchatow’s energy future. It proves that with the involvement of all stakeholders, the region’s prosperity can still be built on energy generation. And with the right scale of investment, there is a chance to maintain the symbolic status of “the capital of energy production in Poland.” The realization of such a scenario requires full mobilization around constructive scenarios, but it clearly shows how the energy of both activities and generation should be directed.”

Felicia Aminoff, energy transition analyst at BNEF and lead author of the report, said: “There are significant opportunities for renewable investment in the Łódź region. Belchatow could co-locate wind and solar repurposing the existing grid infrastructure. BloombergNEF analyzed historic weather patterns and found that solar and wind in the region often generate at different times, complementing each other.”

BNEF also finds that very little new generation capacity is currently planned for the Łódź region. The 600MW solar and 100MW wind projects announced by Belchatow-owner PGE would replace only 4% of the plant’s 2021 lignite generation. The current lack of transition plans for replacing lignite puts Poland’s energy security at risk and could see valuable grid infrastructure around Belchatow become stranded. 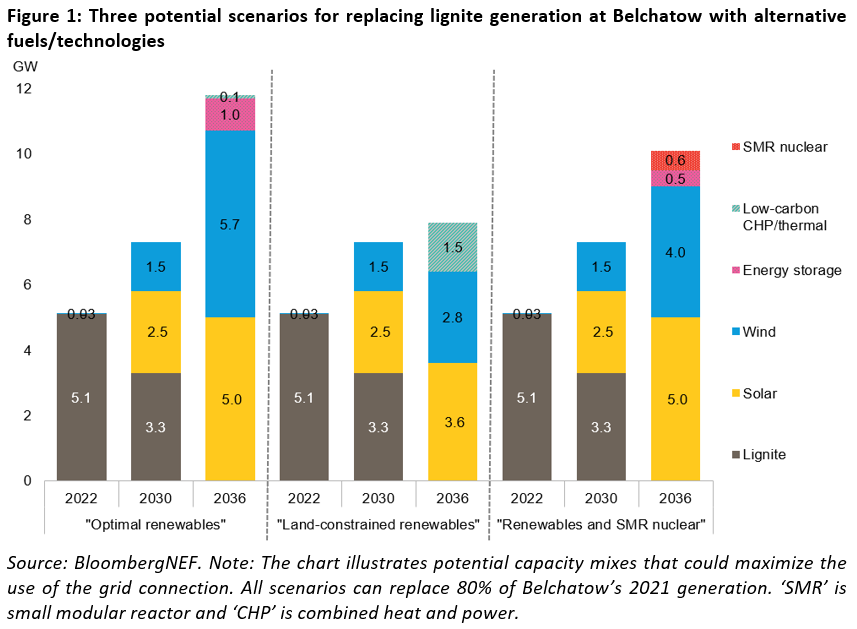 BNEF’s analysis presents several alternatives for replacing the decline in lignite generation at Belchatow alongside wind and solar, including thermal plants such as gas, biomass or waste-to-energy. However, fuel availability and price would limit the feasible size of thermal plants. While Poland is expanding its import capacity for liquefied natural gas to make up for lost imports from Russia, securing investments for a new gas pipeline to Belchatow could be challenging in the current market environment. Nuclear is unlikely to replace lost lignite generation on time as new capacity often takes more than 10 years to plan and build.

Concrete plans to prepare for Belchatow’s retirement and accelerate the deployment of new low-carbon capacity could open the door for the plant to benefit from Just Transition funding from the EU. Poland has the potential to receive around 3.5 billion euros to support five of its regions transition away from coal by 2030. These funds could help the Łódź region with targeted reskilling efforts and new economic development opportunities, and reduce the impact of lost jobs once lignite mining and generation drops. New clean energy projects could boost the local economy and enable the region to continue playing a key role in Polish power production and in the country’s economy.

The full Energy in Belchatow After Lignite report is publicly available via the following links in both English and Polish.

About Bloomberg on Climate
Led by Michael R. Bloomberg, a global climate champion and Special Envoy to the UN Secretary-General on Climate Ambition and Solutions, Bloomberg Philanthropies and Bloomberg L.P. are tackling the climate crisis from every angle. Bloomberg Philanthropies is at the forefront of U.S. and global efforts to fight climate change and protect the environment, bringing together mayors and other government and business leaders, grassroots partners, and environmental advocates across a key array of issues. These philanthropic efforts are accelerating the transition from coal to clean energy, improving air quality and public health, advancing city and local climate action, protecting and preserving ocean ecosystems, and helping unlock billions of dollars in sustainable finance. At the same time, Bloomberg L.P. is providing the global financial community with data-driven insights, news, and analysis to help integrate an ESG lens across the investment process. As a company, Bloomberg L.P. is also leading by example, including committing to 100% renewable energy by 2025 and taking action in the communities where its employees live and work. And through Bloomberg’s stewardship of the Glasgow Financial Alliance for Net Zero and the Task Force on Climate-related Financial Disclosures, Bloomberg is using the power of the capital markets to address climate change and support the transition to a net-zero economy.

About Forum Energii
Forum Energii is a European, interdisciplinary think tank from Poland. The organization consists of experts in the field of energy, with experience in business, public administration, and science. Its mission is to initiate dialogue, propose knowledge-based solutions, and inspire action for a just and effective energy transition leading to climate neutrality. Forum Energii achieves this through analysis, opinions, and dialogue on the decarbonisation of key areas of the economy. For more information, please visit forum-energii.eu/en or follow it on Twitter, and LinkedIn.

Localizing Clean Energy Value Chains Will Come at a Cost