Coming For The Oil Bulls

BNEF’s annual Electric Vehicle Outlook is out now. This is the sixth year we’ve done this report – we launched it in 2016 after seeing that the only groups commenting on the long term outlook for road transport were generally oil companies, and they were dramatically underplaying the changes afoot. Our thesis then — and now — was quite simple: falling lithium-ion battery prices would transform automotive and energy markets in the decades ahead.

Each year we’ve added new features and segments to the report. It now covers all of road transport, from the three-wheeled tuk tuks plying the streets of Bangkok to e-bus deployments in Beijing and luxury electric SUVs parked in driveways in Orange County, California. The outlook considers everything from how shared autonomous vehicles could impact the mix of charging infrastructure, through to what role lithium and cobalt recycling can play in alleviating supply chain constraints for batteries.

The biggest change this year is the addition of a Net Zero Scenario, in which we modeled what would be needed to keep road transport on track for carbon neutrality by mid-century. There are now two main scenarios in the report, the new net zero one and our Economic Transition Scenario. In the latter, adoption is primarily driven by techno-economic trends and market forces. It assumes no new policy measures are introduced.

Here are four interesting findings from this year’s report.

1. Some segments of road transport are much closer to achieving Net Zero than others.

Two-wheelers, three-wheelers and buses already are well on their way and can probably even achieve net zero well before 2050, thanks in large part to an early start in China with these segments that’s now spreading to other countries. Trucks and other heavy vehicles are the furthest behind and urgent action from policymakers is needed to get on track.

Passenger cars and light commercial vehicles are on a positive trajectory, but both still need to accelerate sharply because of how long it takes the fleet to turnover. Almost 60% of global passenger car sales need to be zero emissions vehicles by 2030 to stay on track for Net Zero. That means the entire global auto market would have to follow the same trajectory on EV adoption over the next 10 years as tiny Norway – the leading country on EV adoption today – has over the last 10. That will require an unprecedented scale-up in everything from charging infrastructure to raw material supply.

BNEF clients can download the full report with all 350+ figures and analysis here.

2. All those EVs add to electricity demand, but not as much as you might think.

Thanks to the remarkable efficiency of the humble electric motor, electrifying almost all of road transport, including most heavy trucks, would add only about 25% to global electricity demand by 2050. EVs add more than this in some countries; a combination of smart charging, network reinforcements, and careful planning will be needed to avoid grid capacity issues. 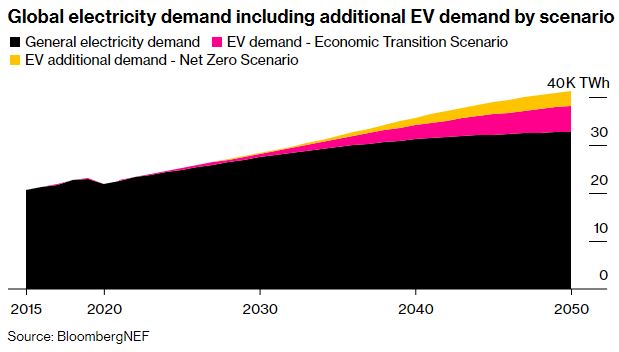 $589 billion of cumulative investment is needed in the global charging network from today to 2040 in the Economic Transition Scenario. That jumps to $939 billion in the Net Zero Scenario. That sounds like a lot, but we found that overall electric vehicle sales represent a $7 trillion market opportunity between today and 2030, and $24 trillion between today and 2040 (almost double that in the Net Zero Scenario). With that scale of prize in mind, it doesn’t feel like charging will be a show stopper. The required charging investment is also much smaller than some other parts of the energy transition. For example, global investment in renewable energy capacity was $304 billion in 2020 alone.

The needs of the network will also change dramatically between now and 2040 as electricity demand from shared vehicles, vans and trucks grows. This will increase the need for more high-powered charging hubs in urban areas and along highways, specifically to serve these vehicles. Dense charging networks can also help enable smaller battery packs, which provides further benefits both economically and environmentally.

4. The outlook for oil demand is grim, in both scenarios.

Even in the Economic Transition Scenario, global oil demand from all of road transport peaks in just 6 years. Commercial vehicles are the only segment of road transport where demand is still growing today, and all others are now in permanent decline in this year’s outlook. 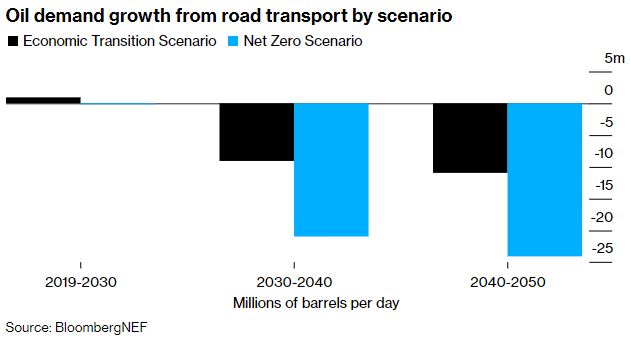 Change is coming quickly in the transport sector. I hope you enjoy this year’s report.