Britain must reassess the way it designs buildings to cope with a warming climate, stepping away from huge expanses of glass and beyond air conditioning that consumes too much energy, a panel advising the government said.

The independent Committee on Climate Change, which draws members from all political parties, said a growing number of heatwaves is turning many modern glass buildings into greenhouses, overheating the people inside.

“It’s critical that we don’t just resort to air conditioning,” said Julia King, chairwoman of the panel’s adaptation sub-committee and a member of the House of Lords. Air conditioning only pushes heat out onto streets outside and increases demand for energy, the group said.

The committee said that the government should instead look to replicate designs already seen in Mediterranean countries such as Portugal, which experience more heatwaves like the kind last week in the U.K., where temperatures soared to their hottest for 40 years. Stifling temperature impede productivity and cause health problems, particularly among an aging population, Brown said.

The Department for Communities and Local Government previously decided against updating building regulations with guidance on overheating, saying it could place too much of a burden on developers at a time when London is facing a housing shortage. The Committee on Climate Change said it should look again.

“We need government to accept that building regulations properly done are not an incubus they are in fact an opportunity to enable people to build for the future,” said John Gummer, chairman of the U.K.’s Committee on Climate Change and a member of the House of Lords.
“We will not deal with the problems of climate change unless we have tougher building regulations.”

The comments were made in the committee’s annual report to Parliament, which said the government isn’t on track to meet its legislated targets to cut greenhouse gas emissions. It called for more policies to encourage the use of clean transport and heating technologies. 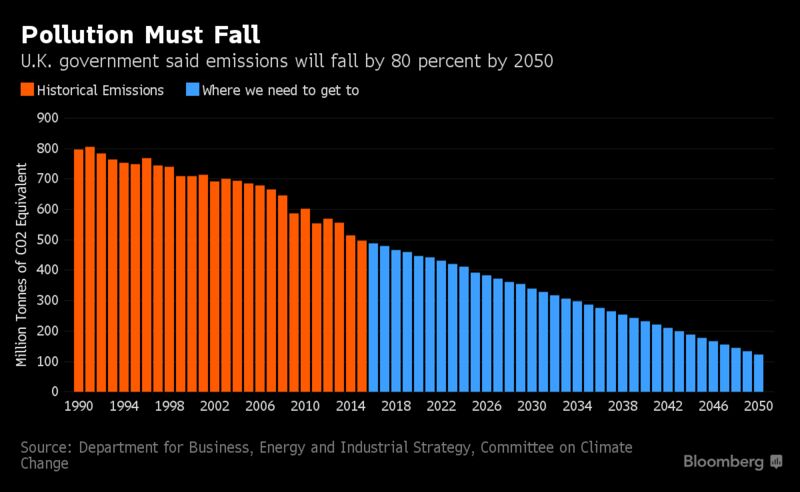 It said the government must urgently publish a delayed Clean Growth Plan which indicates what technologies the government endorses to meet its 2030 climate targets. The program that unfolds in the aftermath of Brexit will send a signal on how the government wants the energy mix to evolve for segments covering everything from electricity to building heat and transport.

While U.K. emissions have fallen by 42 percent since 1990, successes have largely been confined to the power sector, while those from the U.K.’s building stock and transport industries are rising, the CCC said.

While the government should be focusing on designing future policies to decarbonize all industries, “other priorities, in particular Brexit, are likely to take up significant time and effort from experienced analytical and policy making talent from within the civil service,” said Oliver Rix, partner at Baringa Partners, in a statement.