While President Donald Trump prepares to announce his decision on new solar panel import tariffs, the U.S. industry is quietly trying to broker a sweeping deal to settle a different trade dispute with China involving an estimated $1.5 billion held by Washington.

Since 2012, the U.S. has been collecting duties on panels imported from China. American solar companies are pushing to divvy up that money between manufacturers and suppliers in both the U.S. and China as part of a deal that, they say, could effectively reset solar-trade relations between the two nations.

The proposal, which trade experts describe as a long shot at best, would call for Trump to drop existing duties on solar panels — and for the president to not levy new ones. China, in turn, would abandon its own tariffs on U.S. polysilicon, a key solar-panel ingredient. There would be many hurdles to making it all happen. Chief among them, of course, is convincing Trump to take a conciliatory stance with China. Yet solar companies say the deal would fit squarely into the president’s agenda. 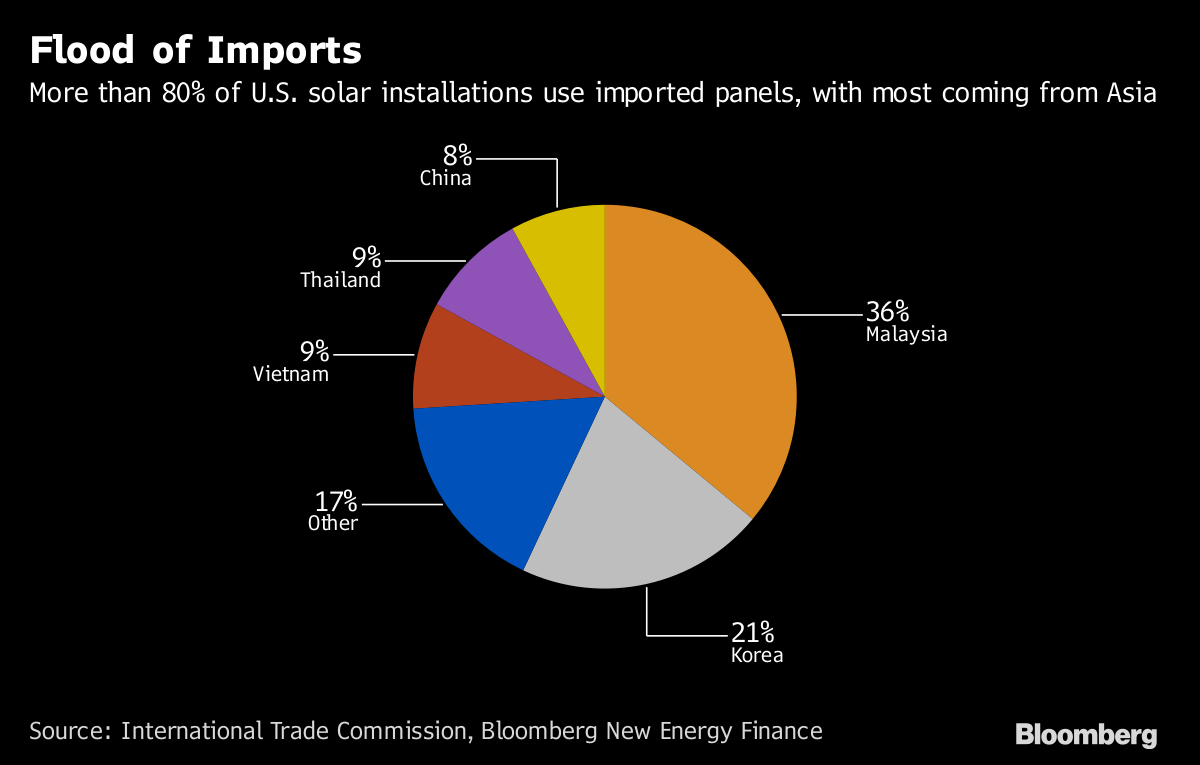 “This administration has a real opportunity to succeed where others failed as a result of your commitment to a re-balancing of trade relations,” Craig Cornelius, senior vice president of renewables at power generator NRG Energy Inc., said at a hearing before Trump’s trade representative in December.

The White House didn’t immediately respond to a request for comment. Emily Davis, a spokeswoman for the U.S. Trade Representative, declined to comment.

Trump has until Jan. 26 to decide whether to impose tariffs, making it unlikely that any deal will be brokered in time to prevent new duties. Most U.S. solar companies oppose tariffs, saying they will cripple the industry and kill tens of thousands of jobs. In the short-term, many are lobbying to keep any duties as low as possible. Ultimately, they are pushing for a broad deal to end all solar trade barriers between the U.S., China and other nations.

“We maintain our position that a global settlement, following the general construct proposed last month by NRG’s Craig Cornelius, would be a welcome outcome to these cases,” Solar Energy Industries Association President Abigail Ross Hopper said in an emailed statement.

The push for the tariffs Trump is considering began in April, when Suniva Inc., a bankrupt, Georgia-based panel maker filed a trade complaint arguing it had been crippled by a flood of imports. SolarWorld Americas, the U.S. unit of a bankrupt German manufacturer, joined the case the following month.

The U.S. International Trade Commission voted in October to recommend tariffs of as much as 35 percent on imported panels. The president has the final say on the size, scope and duration of any duties. They could affect panels imported from nearly every nation.

The tariffs that the U.S. first imposed in 2012 initially targeted Chinese panels and later were broadened to include those from Taiwan. The duties came after SolarWorld Americas accused Chinese manufacturers of illegally selling panels at prices below the cost of production. China hit back in 2014 with tariffs on solar-grade polysilicon from the U.S.

Over the last five years, the U.S. is estimated to have collected more than $1.5 billion in duties on imported panels, Cornelius said in his December testimony. James Rockas, a Commerce Department spokesman, declined to comment.

U.S. solar companies and others have quietly pushed for years to use the money collected from the 2012 tariffs to broker a settlement to resolve the trade dispute with China.

“It was almost resolved it at the end of the Obama administration,” said Jigar Shah, the co-founder of Generate Capital Inc. who was president of Coalition for Affordable Solar Energy, a group that represented a wide swath of U.S. solar installers, developers and manufacturers. The group disbanded in 2015.

There is precedent for the idea. In 2006, the U.S. agreed to drop tariffs on Canadian softwood lumber and split the duties that had been collected between companies on both side of the border. Canadian loggers got about $4 billion, and about $1 billion went to U.S. companies and initiatives.

At the trade hearing last month, Cornelius proposed to split the solar duties that have been collected three ways between U.S. panel manufacturers and polysilicon producers and the Chinese companies that have been paying the tariffs. Instead of new duties, he called for imposing a fee of 2 cents per watt on imports.

“There is hope for a negotiated settlement,” said Clark Packard, trade policy counsel at the free-market think tank R Street Institute. “But there are two issues. One, you’re up against a pretty firm deadline. And two, it would probably require bringing the U.S. and China back to the table to unwind these duties on solar products that cut both ways.”