Vestas leads a group of three major manufacturers, but a “big four” will emerge this year

London and New York, 22 February 2017 – With a clear lead, Vestas reclaimed the top spot in the annual ranking of wind turbine manufacturers, according to figures compiled by Bloomberg New Energy Finance.

Some 8.7GW of Vestas turbines were installed in 2016, good for 16% of all onshore wind installations last year. Vestas returns to the top spot thanks to a strong push in the US. The Danish turbine manufacturer continues to pursue a global strategy with projects commissioned in 35 countries, more than any other turbine maker.

General Electric placed second with 6.5GW, some 0.6GW more than in 2015. While GE narrowly lost its traditional lead in the US market for newly commissioned turbines to Vestas, it managed to increase its global presence to 21 countries in 2016, from 14 in 2015.

Xinjiang Goldwind Science & Technology fell from first to third place with 6.4GW in 2016. Virtually all of the Chinese manufacturer’s capacity was built in its home market, where Goldwind further extended its market share. China’s contracting wind market had a clear impact on Goldwind, as overall installations there were 22.8GW, down 21% from the record 29GW in 2015.

“This years’ ranking shows why 2016 was all about mergers in the turbine-maker sector,” said David Hostert, head of wind research for BNEF. “There is now a strong breakaway group of three companies at the front, with a fairly tight field following. The upcoming merger of Siemens Wind and Gamesa will allow the joined company to catch up and create a ‘big four’ group of dominant manufacturers. Staying at the front of this pack will require both significant size and a balanced presence in the right markets.”

Nordex group returned to the top 10 in sixth place, after its merger with Acciona Windpower last year. China’s Guodian United Power remained in seventh place, ahead of Siemens. The latter fell four places in the onshore ranking compared to 2015. Chinese firms Ming Yang and Envision tied for ninth place, with the difference between the two manufacturers too close to call.

Only 832MW of new offshore wind capacity was commissioned in 2016 in a year that was dominated by installations in Asia. While 2016 was a record for new offshore wind financings for projects to be built over the next few years in Europe, the actual amount being commissioned globally last year was far below 2015’s 4.2GW. China’s Sewind, which produces Siemens offshore turbines under license in China, placed first with 489MW. Of these, some 388MW were Siemens turbines and 101MW were machines of its own design. Under our methodology, Siemens placed second with two projects, in the Netherlands and Taiwan.

Bloomberg New Energy Finance compiles its annual onshore and offshore turbine manufacturer ranking based on its unique bottom-up project database and selected market sources to provide a global, harmonized methodology. These figures may, therefore, vary from manufacturer self-reporting. Gamesa and Siemens are shown as separate companies as the merger between Siemens Wind and Gamesa is not yet finalized. 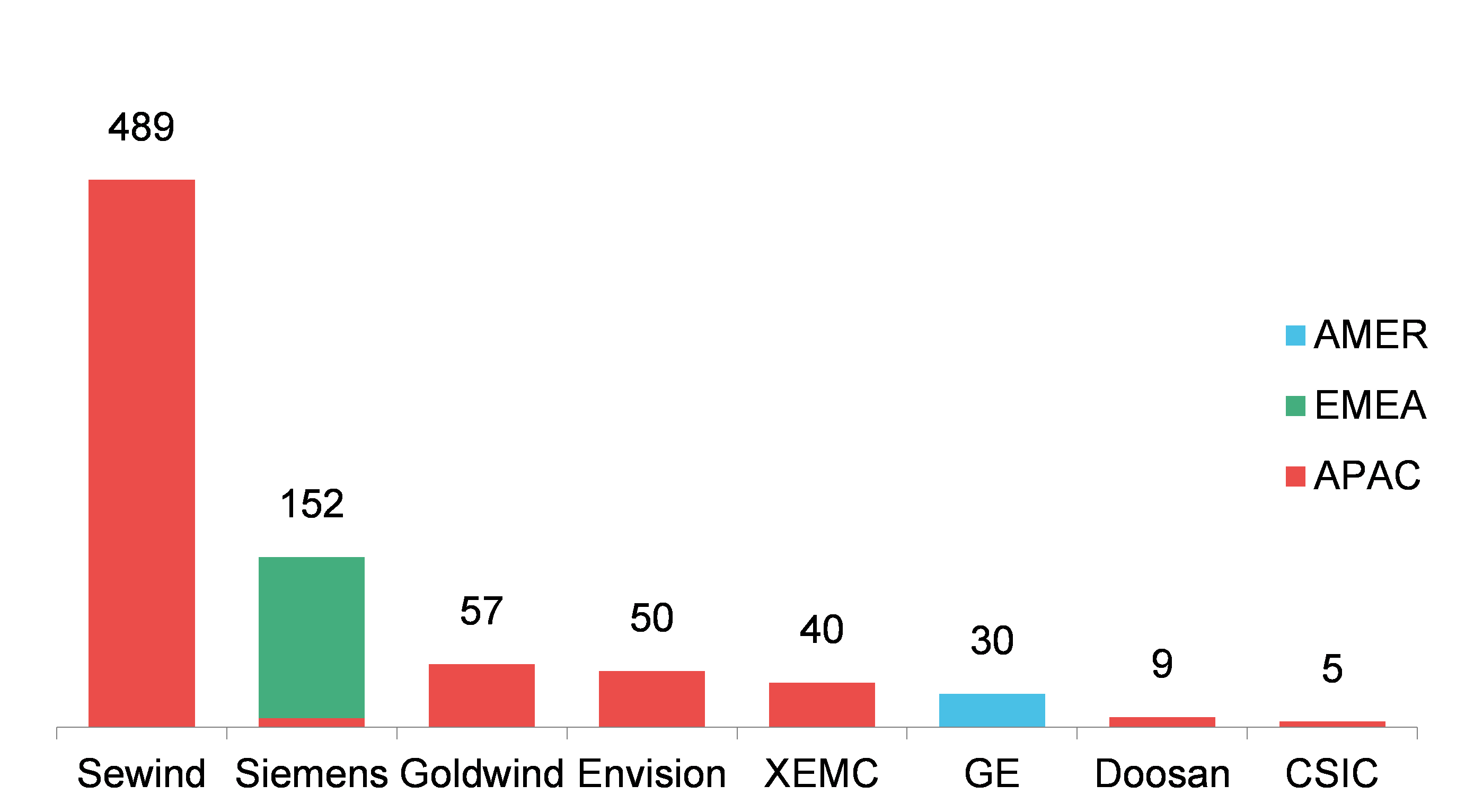 Source: Bloomberg New Energy Finance. Note: Includes offshore turbines only. Total installations were 832MW in 2016. Siemens turbines built under license in China by Sewind are credited to Sewind. In 2016, Sewind commissioned 388MW of Siemens wind turbines and 100.8MW of its own-brand turbines. Neither MHI Vestas (a 50:50 JV between Mitsubishi Heavy Industries and Vestas) nor Adwen (a 50:50 JV between Gamesa and Areva) commissioned turbines in 2016. Offshore projects in AMER and EMEA are counted when fully operational, this does not include partially commissioned projects. Offshore projects in AMER are counted when installed.