What If Big Oil’s Bet on Gas Is Wrong?

Talk to a Big Oil executive these days, and the chances are they’ll steer the conversation toward gas.

“In 20 years, we will not be known as oil and gas companies, but as gas and oil companies,” Patrick Pouyanne, chief executive officer of French giant Total SA, told a conference in St. Petersburg last month.

Pouyanne and his peers have pitched the fuel as a bridge between a fossil-fuel past and a carbon-free future. Gas emits less pollution than oil and can be burned to produce the power that grids will need for electric cars.

But with the cost of renewable technologies falling sharply, some are warning that the outlook may not be so rosy. Forecasters are beginning to talk about peak gas demand, spurred by the growth of alternative power supplies, in the same breath as peak oil consumption, caused by the gradual demise of the internal combustion engine.

In a long-term outlook published last month, Bloomberg New Energy Finance predicted that gas’s market share in global power generation will drop from 23 percent last year to 16 percent by 2040, and that gas-fired power generation capacity will start to decline after 2031. BP Plc has highlighted “risks to gas demand” as a key uncertainty, including the possibility that consumption plateaus by 2035, “squeezed out by non-fossil fuels.” 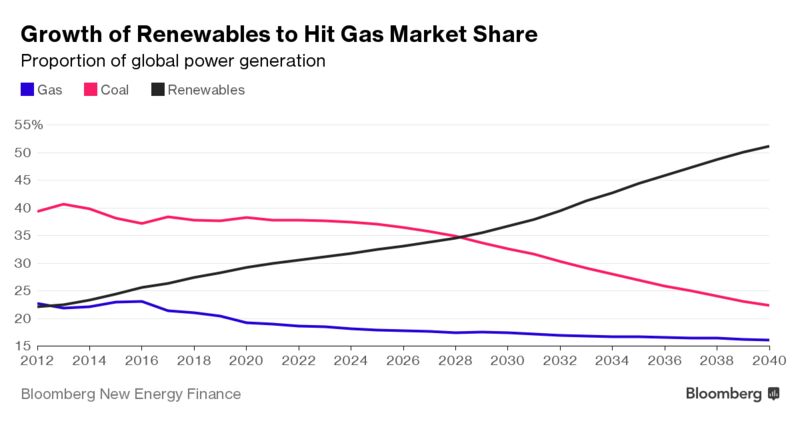 If those forecasts play out, it has huge implications for Total, BP and other oil majors already grappling with a possible surge in electric car use. Gas-exporting nations most notably Russia, Qatar and Australia will also be exposed. The global gas industry, based on multi-billion dollar pipelines and export plants, has decades long investment cycles and decisions being made today rely on rising demand until the middle of the century.

The energy transition is “fundamentally a force that cannot be stopped,” Royal Dutch Shell Plc Chief Executive Officer Ben van Beurden said last month. “It is both policy and public sentiment, but also technology that is driving it.” Oil demand will probably peak in the 2030s or 2040s, he said, while “gas will not peak before the 40s if not in the 50s.”

Shell is still betting heavily on the future of gas after last year’s $50 billion purchase of BG Group Plc, but it’s also planning to spend $1 billion a year on new energy technologies such as renewables.

“There’s no question that gas usage declines over time,” Geisha Williams, CEO of PG&E Corp, the largest investor-owned utility in the U.S., said at a conference in San Francisco. “But I don’t think it’s overnight. I think it’s something that we have to manage.”

Until recently, the energy industry had been hoping that natural gas would play the role of a bridge fuel between polluting coal and emissions-free renewables. That’s because producing electricity from gas generates around half the carbon dioxide emissions that burning coal does. The International Energy Agency predicted a “golden age of gas.”

But rapid changes in the economics of renewables, combined with low coal prices, have put that outlook in doubt. The IEA last week predicted global gas demand for power generation would rise just 1 percent a year in the next six years, down from 4 percent a year in 2004-2010.

Driving the shift has been a sharp decline in the cost of building new renewable power –- which, unlike generating electricity from coal or gas, is almost free to run after the initial capital investment has been made.

“Wind and solar are just getting too cheap, too fast” for gas to play a transitional role, said Seb Henbest, lead author of the BNEF report.

The trends that are undercutting optimism about the global gas outlook are already playing out in Europe. Natural gas demand remains well below a 2010 peak, as greater energy efficiency, rapid adoption of renewables and resilient coal consumption cut into its market share. 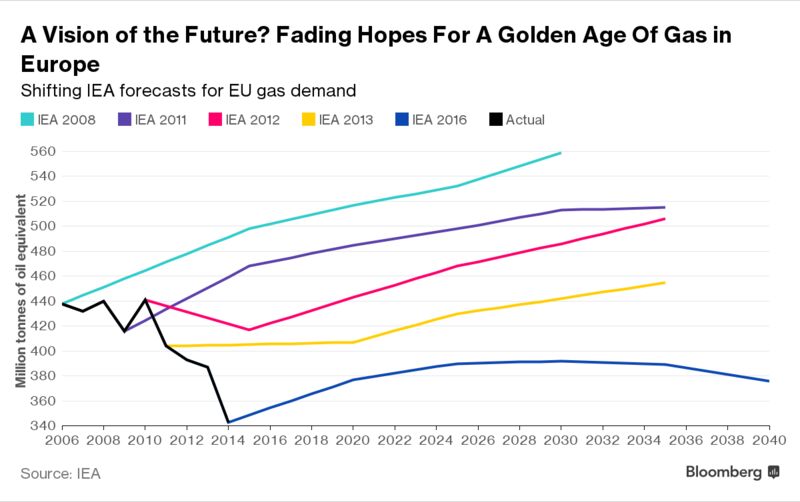 Still, most forecasts anticipate strong growth globally for natural gas demand for two decades or more. In the U.S., plentiful cheap supplies thanks to the shale boom helped gas displace coal as the primary fuel for power generation for the first time last year.

The IEA sees global natural gas demand growing almost 50 percent by 2040. Exxon Mobil Corp. sees a 44 percent increase. BP’s base case forecast is for a 38 percent increase in demand by 2035.

Several things could upend those predictions.

Much of the forecast growth in gas demand is dependent on China and India adopting policies that favor gas rather than coal in an attempt to improve air quality. The Chinese government, for example, has set a goal of getting as much as 10 percent of its energy from gas by 2020 and 15 percent by 2030, up from 6 percent in 2015. The country also plans to more than double import capacity by 2025. If that doesn’t happen, gas demand could peak sooner.

And the power sector, while the largest single source of natural gas demand, only accounts for 40 percent of the market. By contrast, nearly 60 percent of global oil use is as a transport fuel and vulnerable to the rise of electric vehicles.

“The future of oil is down to whether electric vehicles take off or not; the future of gas is quite nuanced,” said James Henderson, director of natural gas at the Oxford Institute for Energy Studies. “Gas producers are talking about how to adapt to a different type of gas market.”

While the outlook for wind and solar for power generation appears limitless, renewables will have a harder time replacing fossil fuels in other sectors. The IEA last week said industry will drive gas demand’s 1.6 percent a year growth through 2022 as it replaces crude oil as a raw material for petrochemical manufacturing, especially in the U.S.

“Gas will play a significant role in the decades to come,” Johannes Teyssen, chief executive officer of EON SE, told Bloomberg on May 24. “Coal will decline much, much faster, but gas probably needs also to accept that its own role will not grow to eternity.”