Where Next For China’s Technology Policy? Creating the Industrial Internet

The Chinese government is throwing some economic weight behind its Internet Plus and Made in China 2025 strategy launched in 2015. The national government believes that developing the ‘industrial internet’ – the use of digital technologies such as the Internet of Things (IoT), AI and cloud in the industrial sector – will be the next growth engine for China’s economy.

BloombergNEF estimates the annual market potential for China’s industrial internet is 328 billion CNY ($47 billion). The Chinese spent 2.6 trillion CNY ($370 billion) on IT technologies in 2018, 250 billion CNY of this on software and data center systems. With the government now subsidizing the adoption of cloud and IoT software, Chinese companies are likely to spend increasingly large amounts of their IT budgets on these two categories.

China’s policy is driving demand for software from national technology companies. Those already benefiting from new business are consumer software firms such as Alibaba and Tencent, and industrial software firms Irootech and CASIC. Tencent recently launched WeMake, an industrial version of WeChat, as it looks to the manufacturing sector for growth, as they saturate the domestic consumer internet market.

To implement the national strategy, local provincial governments are rolling out ambitious subsidy schemes (Figure 1). On average, these subsidies cover 39% of the software and cloud spending of local companies (capped at an average 0.35 million CNY per recipient). The aim is to lower the barrier of procuring new technology for small and medium manufacturers. The subsidies are usually delivered by the government as coupons to qualified companies, who can use the coupons to claim discounts on their software or cloud purchases.

In addition to encouraging manufacturers, utilities, oil companies and other industries to buy digital software to improve operations, the provinces are using subsidies to support regional technology champions. They are giving selected technology providers a lump sum of up to 20 million CNY ($2.8 million) to develop key technologies such as IoT platforms. Through a competitive selection process, local governments want to incentivize regional technology providers to build industrial software that can then be sold to local energy and manufacturing companies. Provincial governments also use these grants to attract technology companies to set up offices in their regions. 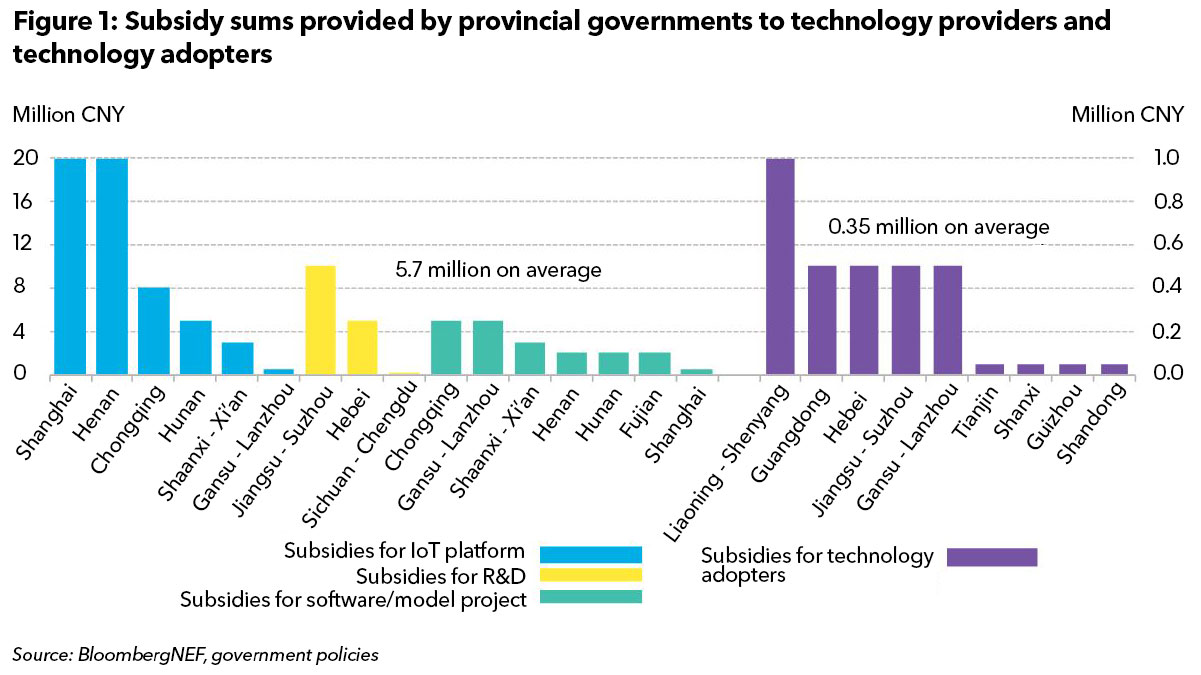 The main technologies subsidized in the local schemes include IoT platforms, cloud-based software as-a-service (SaaS), and big data analytics. In its 2015 Internet Plus strategy, China had an ambitious goal to triple its cloud market size by 2020, and to cultivate three world-leading IoT platform companies by 2025. China also counts 5G and computer chips of strategic importance, recently setting up a 200 billion CNY fund to invest in computer chips and rolling out 5G network nation-wide. Some local governments such as Chongqing and Gansu have also extended their subsidy schemes to smart hardware and network upgrades. 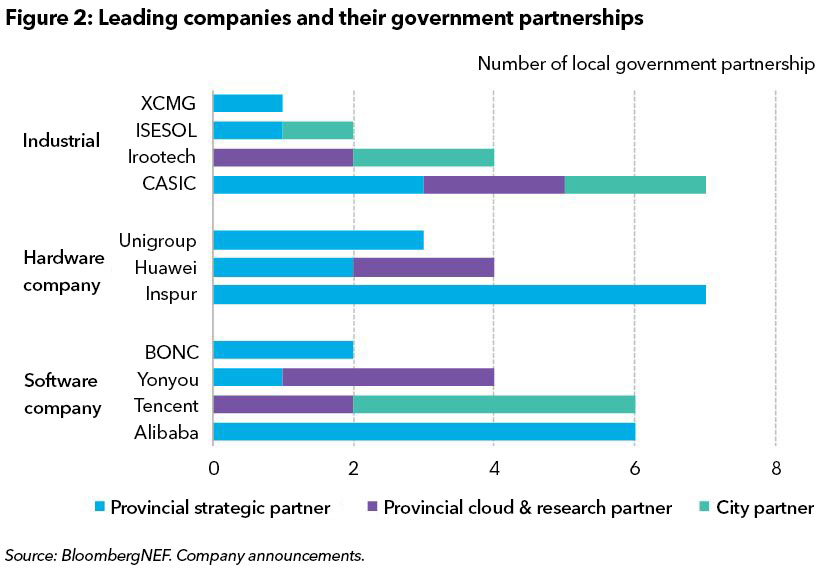 Subsidies are nice, but government partnerships are the holy grail

As part of China’s policy scheme, the provincial and city governments are offering official partnerships with technology firms. The chance to be a state-sponsored technology champion is even more valuable than subsidies because it provides access to local customers and preferential government treatment. Inspur, Alibaba, CASIC and Tencent have been selected the most as local champions – each with six or more provincial partners (Figure 2). They are competing to claim the industrial IoT market with their existing advantages: Alibaba dominates the cloud market in China; Inspur is the largest server supplier for government clients; CASIC is one of the largest state-owned high-end equipment manufacturers; and Tencent operates the largest consumer internet platform.

These kinds of partnerships are in line with China’s broader strategy to cultivate domestic technology champions. Promoting the growth of local technology firms aligns with the Made in China 2025 strategy, alleviates trade war difficulties, and gives provincial governments increased tax revenue. For example, Alibaba, Inspur, XCMG and Irootech are all selected as strategic partners by the provinces in which they are headquartered.

While this suite of policies and subsidies helps Chinese technology providers grow and scale quickly, there are drawbacks. Having only a handful of preferred local technology providers will likely create mini monopolies, slow competition, and rising software prices for clients in that province. The Chinese government is still in the early stages of working out how much it should subsidize technology companies and how to record progress. As the policy matures, BNEF believes it will have to develop a consistent approach to subsidies with a fixed spending target and timeframe. The government will also have to become more transparent in its selection of winners and its evaluation of the project product development outcomes. Supporting local technology firms, as the current policy does, may help bring in additional income tax to a province. However, for Chinese industry to make the most of industrial digitalization it will be important to have a competitive market where all players get equal opportunity to offer the best industrial IoT software to customers.