Why Electric Cars Are Everywhere Except Here, Now: QuickTake Q&A

It might seem like there’s more news about electric cars lately than actual electric cars on the road. Tesla took a step toward becoming a mass-producer this month when the $35,000 Model 3 sedan started rolling off a California assembly line. Volvo said it will begin phasing out cars that run just on fossil fuels in two years. France plans to eliminate gasoline- and diesel-powered vehicles entirely by 2040. Automakers are pouring billions into an uncharted electric future because the cars are getting cheaper more quickly than expected, and because governments worldwide want concrete action against climate change. But these ambitious plans present a jarring contrast to what’s actually happening today in showrooms. In the U.S., for instance, low gasoline prices have super-charged sales of pickups and sports utility vehicles.

1. How many electric cars do people buy today?

Battery-powered and plug-in cars may have been around since the 1800s, but from a sales sense, they’re still in their infancy. Chinese consumers bought about 289,000 last year, more purchases than any other market, according to Bloomberg New Energy Finance. Europeans purchased 215,000 and U.S. consumers bought 150,000. That’s compared with 92 million internal-combustion vehicles sold globally in 2016, and 17.6 million in the U.S. alone.

Battery-powered cars and gas-electric plug-in hybrids are poised to grow so fast that, by 2040, they’ll make up more than half of vehicles sold globally, according to BNEF forecasts. 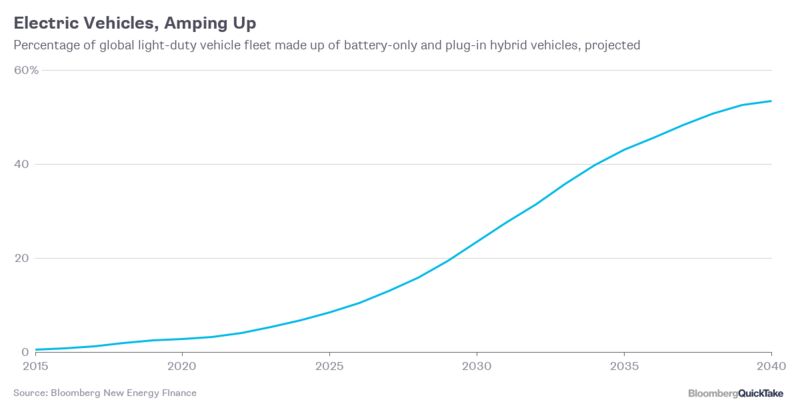 3. What major market is likely to reach a tipping point first?

China. And for different reasons than in other markets. The Chinese are grappling with pollution and worried about climate change. But the nation’s leaders want to move away from gasoline for a different reason: heavy dependence on oil imports is seen as a key strategic vulnerability. To protect itself, China is eyeing quotas that by 2025 could mean that as much as a fifth of new vehicles will be battery-only or plug-in, according to University of California, Davis researchers.

4. Why is Volvo getting rid of gasoline-only cars?

It’s partly about carbon but also about diesel. European automakers and their regulators have long relied on diesel to combat air pollution, but that strategy has been undercut by Volkswagen’s cheating scandal. New European rules for 2020 will cut allowable carbon dioxide emissions by a third, a bigger drop than diesel alone can provide. European shoppers can now select from 52 vehicles with fully or partly electric motors; this number will grow to 95 by 2021, BNEF says.

5. Does this mean goodbye gasoline?

No, just less gas, at least for the near future. Toyota sold 1.4 million gas-electric hybrids in 2017, and expects to continue doing so for many years. In the long run, according to the Japanese giant, fuel-cell cars powered by hydrogen will be the big winners. But even as carmakers are pouring large sums into research and development of electric vehicles and batteries, they’re also working to get more out of the internal-combustion engine. Toyota just introduced a four-cylinder Camry engine that converts 41 percent of the energy in gasoline into usable power. That’s double the thermal efficiency from twenty years ago.

Trump has attacked Barack Obama’s fuel-economy targets as the kind of “job-killing” regulation he thinks needs to be rolled back. But Trump also has yet to show inclination he wants to tangle with California, which has written its own clean-air rules since 1970. Nine other states have embraced these rules, and together with California make up about 30 percent of U.S. sales. California already requires that 15 percent of cars and trucks sold in 2025 be zero-emission; this could jump to 40 percent by 2030.

Elon Musk plans to be building 20,000 of his cheaper Model 3 sedans a month by December, below predictions the CEO made last year. With traditional automakers sinking ever larger sums into electric car and battery research, Musk may not have the post-petroleum spotlight mostly to himself for long. But he’s still widely credited as the visionary whose first electric cars captured the public imagination like no others.

8. How much do electric cars cost?

Because of the batteries they require, electric cars will be more expensive to build than their gasoline counterparts for about a decade, BNEF says. For now, manufacturers must essentially give them away to meet the California emissions requirement. GM was said to anticipate losing as much as $9,000 on every Chevrolet Bolt that leaves a showroom before sales began. Fiat Chrysler CEO Sergio Marchionne griped three years ago that he hoped nobody bought the Fiat 500e electric car, “because every time I sell one, it costs me $14,000.”

Long recharging times mean the most convenient way to replenish a battery is to plug in overnight. This is an option mostly for people who can afford to purchase their own recharging equipment and install it in a private, lockable garage. In the U.S., low gasoline prices make it difficult for electric cars to compete. California regulators reported in January that more than three-quarters of survey respondents had yet to seriously consider a plug-in electric car.

10. What needs to change to get to an electric-car future?

Battery costs are the single most important factor, according to BNEF. Lithium-ion batteries, plus the necessary packaging equipment, will drop to $73 per kilowatt hour by 2030, from $273 currently, BNEF says. A shortage of both in-home and public recharging stations remains a massive, unsolved challenge, the research group says. Public awareness and enthusiasm for EVs needs to grow, and this in turn will encourage governments to maintain public subsidies as EV technology matures.