1. EMEA will install a record-breaking 22GW of onshore wind capacity

Annual onshore wind installations in Europe, the Middle East and Africa will surpass all previous years with developers commissioning 22GW of projects, 3GW higher than the previous record set last year (Figure 1). There are a record number of projects currently under construction across a broad range of markets to help achieve ambitious long-term national targets. Eight markets –Germany, Sweden, Finland, Poland, Spain, France, Italy and Turkey –are on track to exceed 1GW in annual installations, more than in any previous year.

Despite the boom in Europe, global installations appear set to fall for the second straight year in 2022,reaching about 76GW. This is down from 79GW in 2021 and a record-setting 91GW in 2020, which occurred due to a mammoth year of build in China and the U.S. 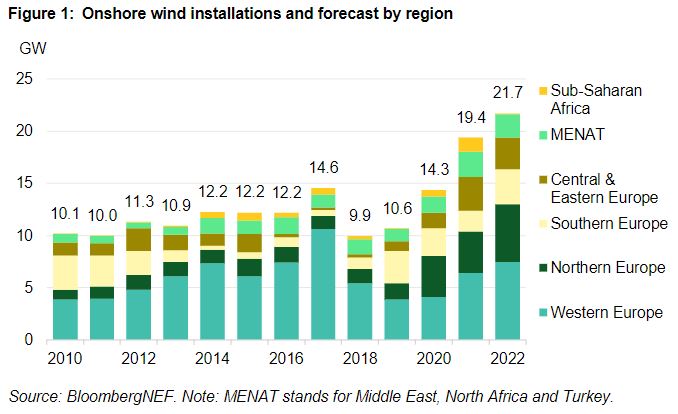 2. Offshore wind installations will top 10GW for the second year in a row

The offshore wind sector will exceed 10GW of installations again in 2022, after first breaching that total for the first time last year. A boom of offshore wind build in China drove the new global build record in 2021, as developers raced to secure central government subsidies before they expired at the end of the year. China is now the largest offshore wind market globally by cumulative capacity, overtaking the U.K. last year.

We predict that 2022 will be a significant year for floating wind with the industry attracting hundreds of millions in new research funding and securing billions in supply chain investment. Today, the floating wind market is still relatively nascent with about 40 different platform designs and no projects exceeding 100MW yet in the water. Despite this, several markets are looking to this technology to help decarbonize their power system.

The supply chain development will be a key focus area in 2022, such that it can meet the upcoming demand from these vast projects. This will require significant investment to upgrade port infrastructure and manufacturing facilities to enable the serial production and storage of floating platforms and other specialized project components. The growth required represents a big opportunity for countries to establish themselves as a global floating wind supply chain hub.

We expect oil and gas companies will bid into all subsidy and seabed lease auctions that take place in 2022,and engage in more joint venture and acquisition activity in the offshore wind market. Many oil and gas majors have already announced intentions to bid in upcoming global auctions, which have over 20GW of capacity up for grabs before the end of the year. Deep pockets could lead to them coming out on top in auctions where project sites are large and commitments to upgrading supply chains are highly valued.

The oil and gas industry has been facing serious pressure to decarbonize and companies have been setting clean energy targets as a result. Offshore wind gives these companies an opportunity to contribute gigawatts of clean energy to these goals with a single project and enables them to leverage their expertise in maritime development.

Oil and gas companies have become increasingly involved in offshore wind over the last few years. In 2020, BP made its first foray into the sector by acquiring 50% of Equinor’s U.S. portfolio. TotalEnergies made a big step into U.K. offshore wind through its acquisition of SSE’s Seagreen project in Scotland. Both players made headlines last year when they won the rights to develop 4.5GW of offshore wind projects alongside their partners in the U.K.’s Crown Estate Leasing Round 4. Also last year, Equinor and Shell won offtake contracts for projects in Poland and the U.S. Oil and gas majors continued their push into offshore wind with a strong representation in the recently announced Crown Estate Scotland’s auction. Shell and BP participated in the two consortia that took the most capacity and, together with TotalEnergies, took a stake in almost 10 of the 25GW awarded.

We predict Chinese manufacturers will secure a record number of orders in overseas markets in 2022. While western turbine makers are finding China’s wind market challenging, fierce domestic competition is encouraging Chinese market players to eye outside markets. Competitive pricing and improving technology are helping Chinese turbine makers unlock more international opportunities. Exports of Chinese turbines to global markets has increased over the years, exceeding 1GW for the first time in 2020.

The average onshore wind turbine price in China is half of the price outside of China, according to BNEF’s latest Wind Turbine Price Index. Today’s Chinese offshore wind turbines on the market are cheaper than western onshore machines.

Mingyang, for example, has secured an 11MW floating wind turbine order in Europe and launched the world’s largest offshore wind turbine model, which has some technical characteristics suited for the windy North Sea. This is beginning to challenge the view that the market lags in technological development, and signals to western turbine makers that a new competitor is eyeing the European market. Mingyang is also the first Chinese turbine maker to announce plans to set up factories in Europe.

We expect turbine prices will remain high through 2022, after enduring the second largest price increase of the decade in 2021. As the world grapples with the continuing supply chain chaos and the new Covid-19 omicron variant, the market sees little indication that port congestion, container shortages, and lack of labor will ease in the near term. Several turbine makers expect the supply chain challenge to last a few more quarters.

Rising commodity and transportation costs are eroding years of cost reductions gained through technological advancement. High shipping costs will keep pressuring turbine makers to raise, or at least not to cut prices. Steel shows some early signs of cooling off. For example, steel prices in the U.S. and China have dropped by 19% and 40% respectively. However, turbines to be delivered in 2022 can still be hit by cost inflation as various components and types of materials have seen considerable price increases compared to the beginning of 2021.

7. A major turbine fault will lead to a recall

A series of wind turbine faults in past years combined with diminishing product diversity suggest that a bigger turbine fault could be ahead. Turbine faults aren’t a common occurrence but do happen from time to time.

As wind turbine makers add new platforms to their product lines, sales can quickly focus on the newer models, as older models are phased out of the product lines. This leave a turbine maker and developers exposed to revenue losses if a problem is discovered with one of the turbine models. Last year, BloombergNEF tracked at least 468 (44%) orders of the Nordex Acciona N163 163m 5.70MW turbine within the year, against 1,064 disclosed turbines sold. GE’s General Electric 127 127m 2.82MW turbine was the firm’s most-sold turbine, accounting for 599 unit sales (38% of total turbines sold).

The onshore wind market outside of China could see further consolidation among turbine manufacturers this year. Data suggests that the top five manufacturers1captured between 92-94% of the ex-China market share in 2021, the highest to date. These conditions leave little room for other turbine makers to compete in the western markets, and have already pushed some smaller players out of the market. Between 2017 and 2020, the combined market share of Senvion and Suzlon Energy shrunk from 10% to just 2%.

Increasing shipping costs and commodity prices are are contributing by adding pressure to margins that were already tight. Margins reported by Vestas, Siemens Gamesa, and Nordex Acciona on average declined 7.7 percentage points year-over-year.

Towards the end of 2021, BloombergNEFtracks32.6GW of the year’s new onshore wind build used turbines from Vestas, GE, Siemens Gamesa, Nordex and Enercon. This is just 1.8GW short of the 34.4GW these manufacturers added in 2020. We estimate a further 12.4GW of the capacity came online in 2021 and has yet to be attributed to a specific turbine maker. If we assume the top five account for at least 90% of this remaining capacity, their cumulative market share will grow to 92%. This could climb as high as 94%, up three percentage points on 2020, if they account for all of the unassigned capacity.

9. A second country will see negative subsidies for offshore wind

We expect this year to see the second offshore wind auction where developers will pay for the right to build and operate projects rather than receive subsidies. Developers bidding in the 2022 Netherlands’ Hollandse Kust West offshore wind tender can bid up to 50 million euros. While the bid price only accounts for 10% of the assessment criteria, and qualitative metrics hold greater importance, this represents the next step for the industry beyond zero-subsidy auctions.

Recent auctions in Germany and the Netherlands have brought zero-subsidy bids, while there will be no subsidies on offer in an upcoming auction in Norway. While the government often carries out some pre-development work and builds a grid connection, winning developers must sell electricity generated on the wholesale power market or rely on corporate and utility offtakers. This represents much greater revenue risk than traditional long-term government subsidy contracts.

In December 2021, RWE AG won a tender for the first negative-subsidy project. The company secured rights to develop the Thor offshore wind farm in Denmark. Several companies bid at the maximum capacity of 1,000MW, meaning the winner was chosen at random and at a nominal floor price of 0.1 Danish krone ($0.015 )/MWh. RWE must give back any electricity market revenues that exceed the price until its payments hit a cap of 2.8 billion krone ($425m). After hitting the cap, the project will be exposed to the wholesale electricity market if it cannot secure an offtaker.

10. Offshore wind auctions will place more of an emphasis on local content requirements and qualitative criteria

A major selling point of offshore wind is the wealth of economic development opportunities that come with it. As parameters for new offshore wind auctions are announced this year, we expect to see this trend continue with additional qualitative requirements baked into tenders, or more weight placed on local commitments, than in the past.

Offshore wind projects require port infrastructure, installation and service vessels, turbine manufacturing facilities and skilled labor amongst other things. In an effort to take advantage of these opportunities for local investment, markets around the world have been increasing the emphasis on qualitative criteria when assessing bids for offshore wind offtake contracts.

The tender for two 700MW sites at Hollandse Kust West is set to open in the Netherlands in January 2022. For one site, bids will score points by using innovative methods to minimize ecological impacts, and on the other site, officials will grade projects for their ability to integrate generation into the onshore network. In the U.S., Massachusetts’s third offshore wind solicitation last year increased the weight of qualitative factors by 5% since its last award. The Taiwanese government has confirmed that local content requirements will still be included in its next offshore wind auction.