Corporate power purchase agreement (PPA) prices across Europe have increased 7.2% on average since 2H 2021 and an astonishing 13.5% since 2H 2020, according to our latest European Corporate PPA Price Survey. For the first time, prices increased across all technologies and in all markets. The region’s energy crises, a series of major market disruptions starting with Covid-19 and culminating in the Ukraine war, have pushed average forward prices up 103% since BNEF’s last survey. This has sent developers scrambling to re-calibrate PPA offer prices to make deal economics work and could slow deal-making in the short-term. 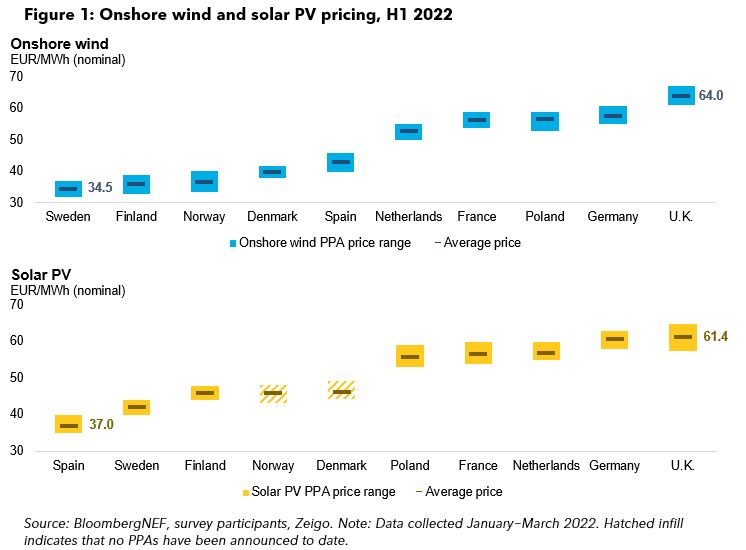 Nobody is immune to the energy crisis

PPA prices have increased so much due to Europe’s ongoing energy crisis. This has been triggered by several factors, most importantly including rising natural gas and carbon prices. Natural gas prices increased as European lockdowns eased, while global energy demand rose, and Asian gas supplies struggled to keep pace. European stockpiles were therefore critically low going into winter, causing prices to reach 173 euros/MWh. To compound this, Europe’s supply of gas from Russia has become uncertain due to the invasion of Ukraine. Simultaneously, carbon prices rose from 37 to 69 euros per ton between March 2021-22, reaching a high of 97 euros per ton on February 8, 2022. The price increase has largely been driven by the EU’s commitment to a 55% reduction in emissions by 2030.

The survey looks at the range of offer prices for solar and onshore wind PPAs across 10 European markets. Solar PPAs are generally more expensive than wind by up to 10 euros/MWh in each respective market, although the average gap has narrowed from 6.7 to 4.5 euros since 2H 2020. This is because onshore wind prices rose slightly more on average (9.4%) than solar (5.7%) over that time.

Consistent with our last two surveys, Spanish solar (37 euros/MWh) and Swedish wind PPAs (34.5 euros/MWh) are still the cheapest in their respective technologies. In Spain, prices are likely to be kept low by renewable energy auction results, with the latest in October 2021 commanding the lowest average prices in Europe across wind and solar at 30.6 euros/MWh. There is also a significant amount of price cannibalization expected, with a portfolio of commissioned projects totaling 22.9GW since 2017. Sweden remains a competitive market for wind PPAs, boasting excellent natural resources, large areas of unused land and an abundance of hydropower to keep balancing costs low. The region is also desirable from a corporation’s standpoint due to the significantly lower costs of cooling for data centers: companies can use Baltic Sea water or pull in cool air using fans.

Most markets are buyer’s markets, but deals are a balancing act

PPAs are bilateral contracts with multiple counterparties, so the dynamic between PPA prices and power prices creates an economic bias towards either a buyer’s or seller’s market. Based on the relationship between PPA prices and wholesale power futures (with a differential as high as 63 euros in the U.K.), we estimate that six of the ten European countries surveyed are buyer’s markets.

However, an economically attractive market for one party does not necessarily mean deals will close, as there are other elements of a strong negotiating position. In a buyer’s market, sellers may use the high wholesale price to negotiate a premium from determined buyers, given the alternative lucrative option to sell more power on the wholesale market. This gives them a relatively strong bargaining position, as they can afford to wait for their best offer.

PPA prices are not static and depend on a variety of adjustment factors, so no one market price exists – even for the same technology within a given market. In addition to technology, PPA structure also has a significant and wide-ranging impact on price. BNEF’s survey found that annual baseload contracts, tailored to meet a company’s hourly demand, command a premium varying between 1.7 euros/MWh (Finland) and 6.4 euros/MWh (U.K.) compared with pay-as-produced deals due to balancing costs. On average, balancing costs have risen 1.7 euros/MWh since 2H 2020, in tandem with hedging contracts (which underpin baseload structures) due to high energy prices. It’s not expensive everywhere though: annual baseload prices in the Nordics are around five euros lower than in other markets surveyed due to the abundance of hydro power, which acts as a natural battery, providing a cheap generation alternative when required.

Term length is also a key determinant of corporate PPA pricing. In Europe, a premium of up to 2.3 euros/MWh may be charged for shorter term deals (5-10 years) compared with standard 10-15 year deals. A similar premium is charged for 15-20 year deals. This is because developers must cover their financing period (usually 10-15 years) but do not necessarily value revenue certainty beyond this. The slightly higher price reflects the risk of an offtaker being unable to honour its long-term payment commitment. This is a key distinction between Europe and the U.S. – the world’s largest corporate PPA market – where longer deal terms attract a discount.

In the face of extreme power market volatility throughout Europe, PPA values held strong through the third quarter of 2021. As observed in our last two surveys, the long-term, typically fixed, nature of PPA contracts made them less susceptible to short-term price increases and volatility. This further increased their appeal, with total deal volumes (8.8 gigawatts) signed in 2021 exceeding the cumulative total before 2019. This continued into the first two months of 2022, when 1.1 gigawatts of PPAs were signed in Europe – more than in any other region.

While the long-term, fixed nature of PPAs has historically made them less susceptible to short-term price increases and volatility, the war in Ukraine has changed the equation. Prices have become so elevated, with the average price for year-ahead contracts reaching 143 euros/MWh, that developers cannot reasonably model cash flows in the short- to medium-term. Until prices find a new equilibrium, which could take months, deal activity will likely start to decline, with the healthy stream of announcements in 2022 through February (xGW) being more of a reflection of negotiations from 2021 spilling over. European energy gas and carbon prices also look set to remain high, as the drivers that tightened these markets show no signs of easing.

In the medium term (2025-2030) and long term (2030 onwards), companies will have time to react to this adjusted prospect of more expensive power and consider the different options available to hedge against this, including corporate PPAs. Prolonged expensive power should increase buyer demand for corporate PPAs, even if this means they must pay a (often significant) premium. The trade-off is worthwhile to avoid the crippling levels of volatility that have, in many cases, required temporarily shutting down production facilities. BNEF expects baseload prices to come back down significantly, as Europe strives toward its 2030 target of 40% renewables and more projects come online. This creates an adverse environment for developers to rely solely on the wholesale market, making them more reliant on support mechanisms such as auctions and PPAs again.