World Clean Energy Investment Slips in 1H 2019, Despite Billion-Dollar Financings of Solar in Dubai and Offshore Wind in Taiwan

London and New York, July 10, 2019 – The first half of 2019 saw a 39% slowdown in renewable energy investment in the world’s biggest market, China, to $28.8 billion, the lowest figure for any half-year period since 2013, according to the latest figures from BloombergNEF (BNEF).

The plunge in activity in China, as the country shifts this year away from government-set tariffs to auctions for new wind and solar capacity, also depressed the 1H 2019 global investment figure – to $117.6 billion, down 14% compared to the first half of 2018.

Justin Wu, head of Asia-Pacific for BNEF, commented: “The slowdown in investment in China is real, but the figures for first-half 2019 probably overstate its severity. We expect a nationwide solar auction happening now to lead to a rush of new PV project financings. We could also see several big deals in offshore wind in the second half.”

The other highlight of global clean energy investment in 1H 2019 was the financing of multibillion-dollar projects in two relatively new markets – a solar thermal and photovoltaic complex in Dubai, at 950MW and $4.2 billion, and two offshore wind arrays in the sea off Taiwan, at 640MW and 900MW and an estimated combined cost of $5.7 billion.

The Dubai deal in late March, for the Mohammed bin Rashid Al Maktoum IV project, is the biggest financing ever seen in the solar sector. It involves $2.6 billion of debt from 10 Chinese, Gulf and Western banks, plus $1.6 billion of equity from Dubai Electricity and Water Authority, Saudi-based developer ACWA Power and equity partner Silk Road Fund of China.

Jenny Chase, head of solar analysis for BNEF, said: “Al Maktoum IV is an unusual one in combining three different types of solar – the thermal technologies of parabolic trough and tower, with conventional PV – but it is also a strong signal of the appetite for solar electricity on the part of both Middle Eastern countries and international financiers.”

Breaking global clean energy investment[1] down by type of transaction, asset finance of utility-scale generation projects such as wind farms and solar parks was down 24% at $85.6 billion, due in large part to the China factor. Financing of small-scale solar systems of less than 1MW was up 32% at $23.7 billion in the first half of this year.

Venture capital and private equity funding of clean energy companies in 1H 2019 was down 2% at $4.7 billion. There were three exceptionally large deals, however: $1 billion each for Swedish battery company Northvolt and U.S. electric vehicle battery charging specialist Lucid Motors, and $700 million for another U.S. EV player, Rivian Automotive. 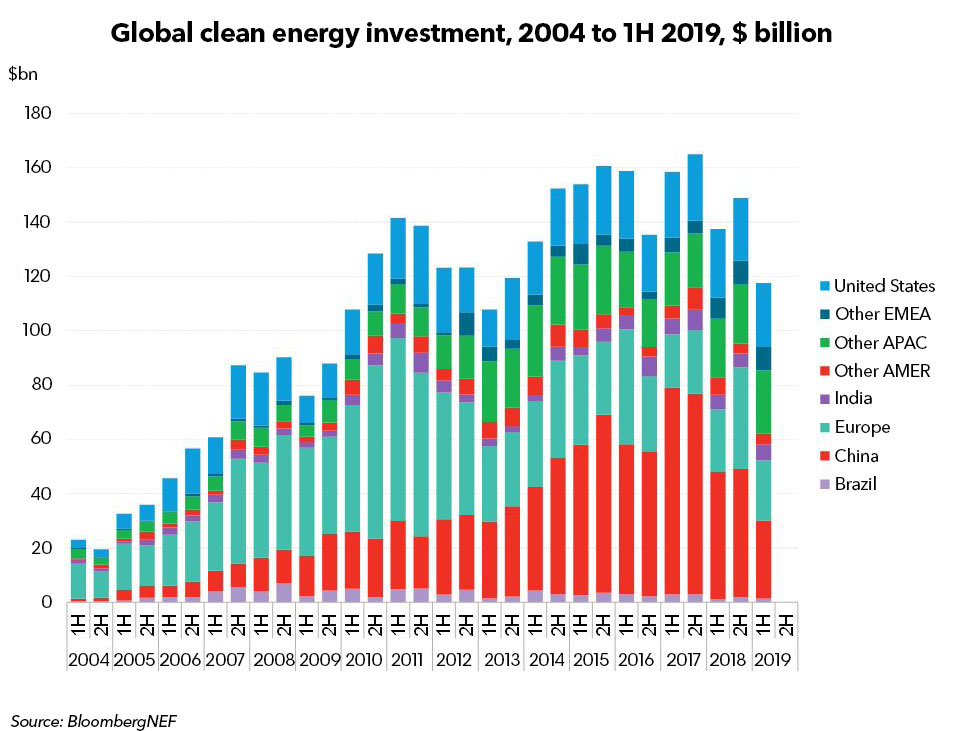 Europe Leads on ESG Policy, But Trend Promising for All