How the World’s Governments are Approaching Earth-Friendly Investing

By Nathaniel Bullard and Daniel Shurey.

Green bonds are a fast-growing financial instrument, with annual issuances of less than a billion dollars a decade ago having grown to more than $170 billion last year. They’re increasingly popular as a way to fund environmentally friendly infrastructure, energy efficiency and clean energy. As the market grows, an intriguing split is emerging between green bond markets: Asia gets carrots, and Europe gets sticks. 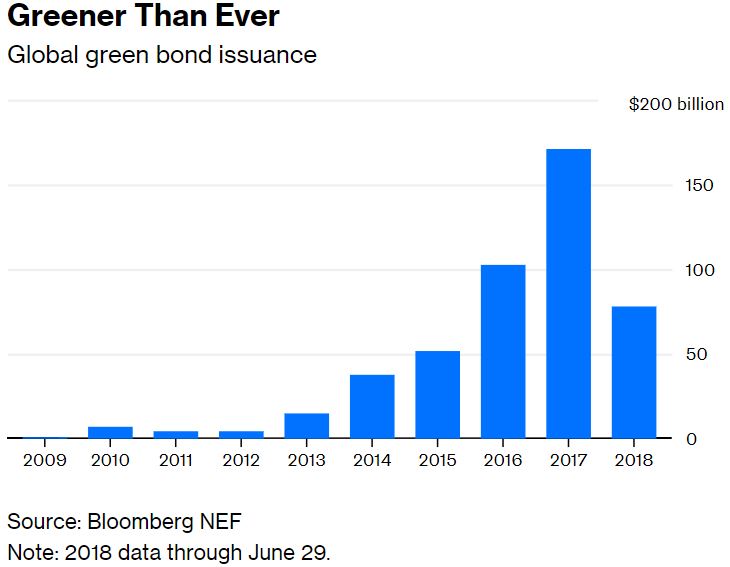 Green bonds are still only a drop in the bucket of the world’s fixed-income market: only about half a percent of all issues last year. The U.S. alone issued nearly $8 trillion of new debt securities in 2017. 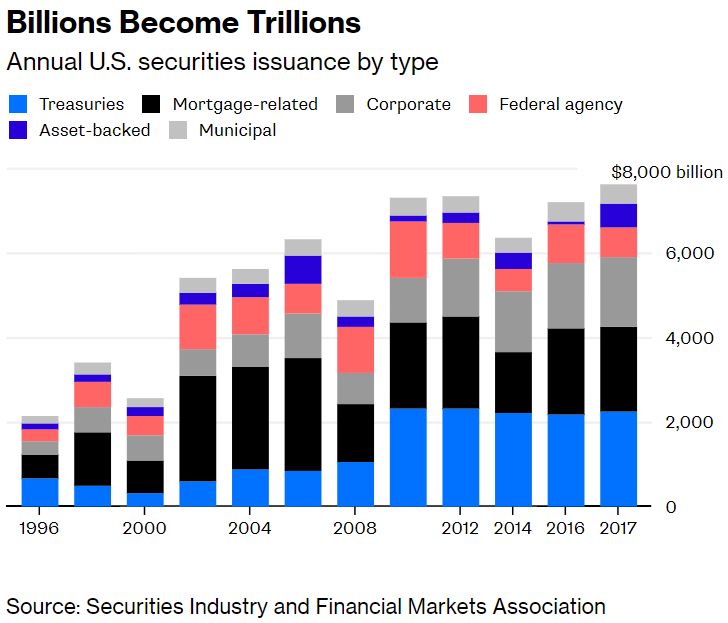 If the finance community wants to see the green segment move from esoterica to a meaningful component of global capital markets, volumes will need to shift from the billions to the trillions.

Cue governments. A growing number of market regulators now believe that top-down measures are important for moving green capital flows into the trillions of dollars. So how do governments engage in a market that has so far developed organically? In the simplest terms, there are three options for intervention: Incentivize growth with a carrot, force growth with a stick, or walk ahead to lead by example. While many countries agree on the need for government involvement, authorities in each of the three major key regions for bond issuance — Asia-Pacific, Europe and the U.S. — are taking very different approaches to the challenge.

Asian governments are all about carrots. Five incentive programs are either in effect or in development throughout the region, with China, Hong Kong, Japan, Malaysia and Singapore all vying to incubate green markets locally. The most common form of incentive is a grant for green bond issuance costs — in particular, the cost of third-party verification of “greenness.” These costs are usually small compared to the amount of capital raised via a green bond, but issuers can find them hard to justify if they aren’t guaranteed to declare a bond green. 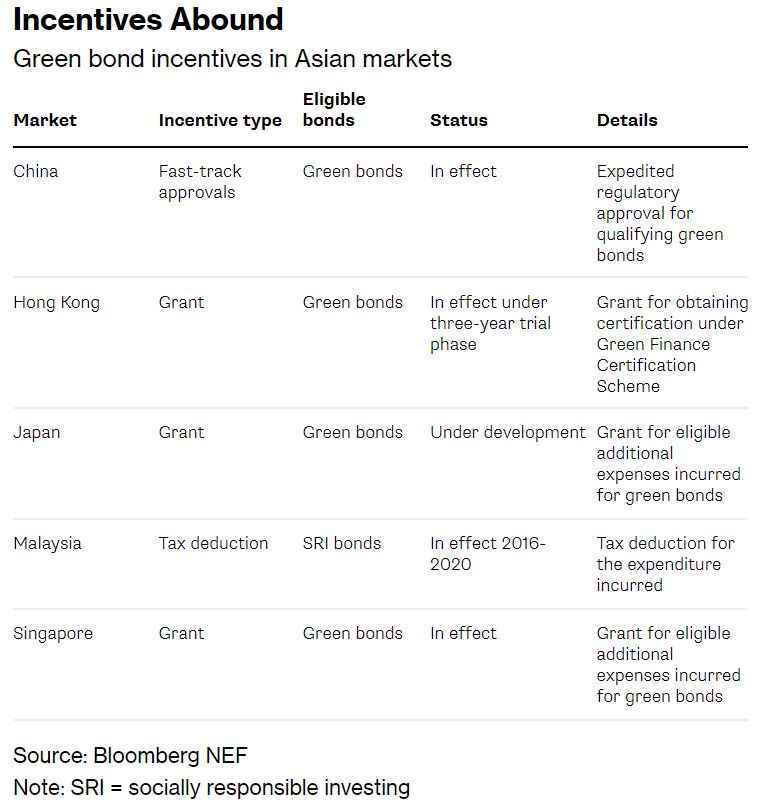 Hong Kong recently announced the most generous support system yet, with a trial plan to cover up to HK$2.5 million ($160,000) of eligible issuance expenses for qualifying green bonds. Far more significant in scale are the incentives announced by the People’s Bank of China. The PBOC recently announced that it is also mulling the creation of pilot zones for green financial incentives, but no details have so far been given. In the meantime, the country already offers a regulatory carrot: fast-tracking some approvals for eligible green bonds over regular bonds.

Green bonds were born in Europe, in an environment with few financial or regulatory incentives for green finance but with abundant proposals for ways to create scale. In March, the European Commission released an action plan to scale sustainable finance in the region. The plan focuses on enforcing behavioral changes on the demand, rather than on the supply, side of the green market equation. Proposals include a push to clarify the duties of asset managers so that environmental, social and governance issues are considered in investment decisions, as well as rules to make sure banks incorporate sustainability in their capital lending requirements. It’s a more muscular approach than in Asia, and it’s also structured more around penalty than around opportunity.

The third government tactic is to lead by example. In the past five years, a market in sovereign green bonds has emerged. These supersized green securities are issued by a country’s treasury to demonstrate political commitment to sustainability. While all the green sovereigns to date have been issued by European or Asian-Pacific authorities, they were a tiny market until this year, with issuances exceeding $14 billion through the end of June. That said, until this year, green sovereigns were actually a smaller market than U.S. municipal green bonds. That market exceeded $10 billion last year with zero leadership from the federal government, as scaling green finance does not seem particularly high up on the agenda of an administration that pulled out of the Paris climate accord.

Instead, green finance programs are being led by state and local entities engaged in climate change issues, as well as government-sponsored enterprises, such as mortgage giant Fannie Mae. Nearly $30 billion worth of green municipal bonds have been sold in the U.S. to date, far surpassing the $25 billion of global green sovereign notes. 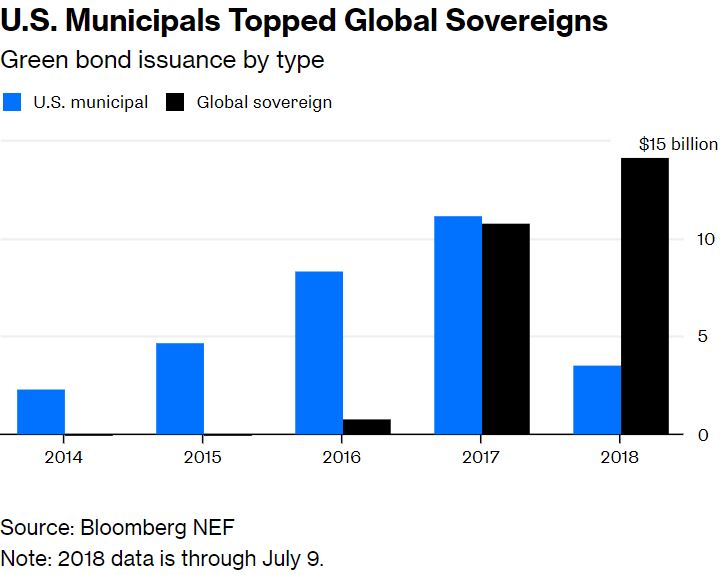 The need for new, cleaner and greener infrastructure is clear in the U.S., but green municipal bonds also give states a chance to rebuke the current federal view on climate change. In fact, nine of the top 10 largest issuers of green municipal bonds are from states that are signatories to America’s Pledge — a coalition of organizations that want to maintain the U.S.’s prior commitment to the Paris Agreement.

Whether it is national carrots and sticks or local motivations, government-led green bond initiatives are mobilizing billions of dollars every year. In this regard, green bonds are following a path trod by clean energy a decade ago, when many governments around the world took similar approaches to intervention with the renewable energy market. Authorities offered both carrots (like subsidies) and sticks (like minimum renewable energy sales requirements of utilities) to help scale the market and bring costs down. Today, we see numerous examples of highly competitive renewable energy projects that are able to thrive in the market without any government support whatsoever. Carrots and sticks worked well enough for clean energy that they’re often unnecessary today. Perhaps they’ll work just as effectively for green bonds, and become unnecessary as well.