Young: Summit 2016: Clinches and throws of the wrestle for the grid

Deep in the accumulated wisdom of Bloomberg BusinessWeek, I suspect there is a recipe for a perfect front page.  It runs as follows: take 4oz of Warren Buffett, 4oz of Elon Musk, 6oz of wrestling and stir vigorously. Most recently these ingredients were baked into a story about the battle in Nevada between Buffett’s NV Energy and Musk’s SolarCity over rooftop solar and net metering, which ran with the tagline of “Who owns the sun?” 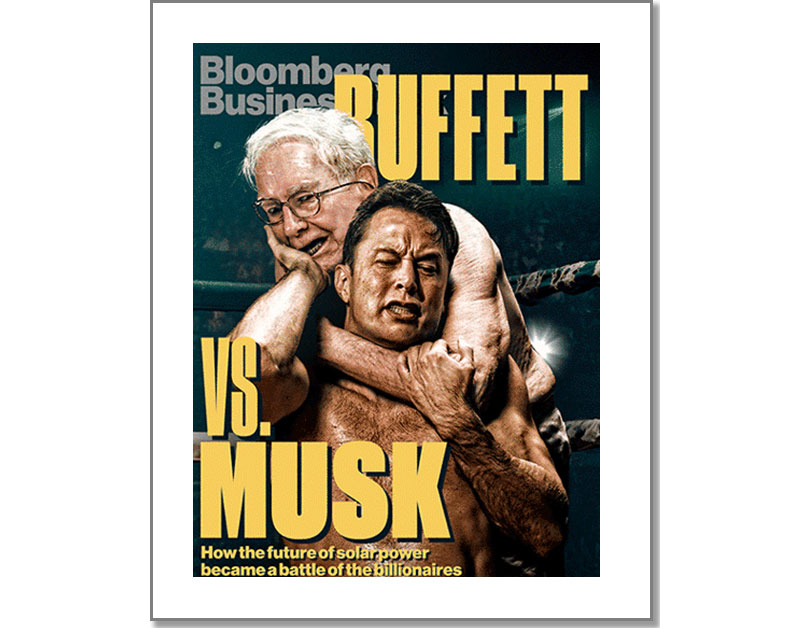 Those closely following the travails of the power industry know that this entertaining battle is the tip of the iceberg – the culmination of long-developing trends and interests playing out, not just in Nevada, but in almost all regions of the world where the sun shines and electricity could be generated and consumed locally.

Bloomberg New Energy Finance’s 2016 annual Global Summit on the Future of Energy, which takes place on April 4-5 this year in New York will be taking a deep dive into these trends.  Over 1,000 executives and thought-leaders from the very top of the energy industry, finance and government will debate the opportunities and perils for business resulting from shifts in energy supply and demand, as well as developments in technology, productivity and human behavior. These issues may play out differently in different regions, but they leave no part of the world untouched – whether it is rock-bottom oil prices and the US gas glut bankrupting producers; plummeting wind and PV power prices changing the power dispatch order; the decoupling of economic and energy demand growth; or the potential impact of electric cars.  If you thought the last five years were interesting times for the energy sector, expect the next five years to be even more so.

As well as supply and demand, there is a third dimension, which we have made central to the agenda of the Summit, and that is the network, where supply and demand meet and over which their differences are resolved.  How will the grid deal with so much more variable renewable energy and more self-generation? As electricity flows change from being one-to-one (mainframe to user), to being many-to-many (mainframe to user, user to mainframe, user to user), will grid operators and utilities successfully morph their business models? Or will they freeze in the headlights as hundreds of new stakeholders look to use their platforms without adequately remunerating them?

Before we discuss the grid though it is important to remind ourselves of where we are and the questions and insights in energy supply and demand.

At the Summit, we will be tackling “Big solar for big energy”, asking what the opportunities for large-scale solar is in markets with growing power demand.  We will also explore the medium-term outlook for North America gas, in terms of production and distribution, exports and the likely impact on pricing and investment returns.

The Summit will also ask the question of whether the best states to develop wind are those with high wind resources and low build costs, or where there is a lower wind resource but higher electricity and renewable energy credit (REC) prices, or those states most likely to be affected by the Environmental Protection Agency’s Clean Power Plan (assuming it survives legal challenge)? On nuclear, the event will debate whether the growing interest in molten salt reactors can bring a new generation of safer, securer, cleaner generation, and if so at what costs and by when? Thought-leaders from the power sector will also discuss, at the fleet level, how major utilities are tweaking their generation portfolios in light of market reform, the Clean Power Plan and the opportunity to sell capacity, frequency management, demand response and other ancillary services.

On the demand side of the equation, the Summit will discuss the outlook for two major power customer groups – retail/consumer and business/corporate.  In the connected home session, we will look at retail/consumer users, where the tagline “New revenue, lower churn?” reflects the hopes of many utilities and new entrants.  In the corporate procurement session, we will switch our attention to large business/corporate buyers, where a new generation of industries is joining the railroad companies and aluminum smelters in directly procuring their own power.

We will also tackle the two closely interrelated sectors of energy storage and electric vehicles, both pregnant with opportunity and with implications for electricity demand.  In the EV session, we will ask whether the US can lead the global electric vehicle market as it has led the conventional automobile market for most of the last 100 years. Cumulative global EV sales hit 1 million in late 2015; if current trends persist, the next million should take less than two years, but Europe and Asia will be leaving the US behind. The Summit will hear from senior executives on all sides of the struggle between EVs and conventional vehicles, on the market’s growth prospects – and the possible implications for electricity demand and grid balancing. In the energy storage session, we will be asking the $100-billion question: whether grid-linked storage is going to be a major market or a niche business.

The fundamental question on networks is how the system evolves as the flow changes from one-to-one to many-to-many, and what these changes will mean for network charges and utility business models.  In other areas of the economy, a multiplying of transactions and players would be greeted with delight. The welcome would come not only from consumers benefitting from increased choice and competition, but also from those that own the systems through which this trade passes. In electricity, however, a system built as a series of local monopolies, there is more trepidation and, in many cases, attempts to resist change. However, it is clear that some utilities and regulators are alive to the opportunities and there will be major interest at the Summit on what they have to say.

And how will the value of a kilowatt-hour change? Electricity units are certainly getting harder to value as daily supply profiles are disrupted by close-to-zero marginal cost renewable energy.  Will the emphasis shift to other services such as capacity?

Bloomberg New Energy Finance will be sharing its emerging research on the kind of flexibility that is needed in the power system of tomorrow, how it will be paid for and what opportunities there are for different flexible technologies. We will also be diving into the detail on state-level retail rate reforms, how they are changing, and how the boundary between transmission and distribution grids is being blurred as large-scale distributed energy and storage applications emerge.

As 2015 evolved and turned into 2016, it became clear that this was a view shared amongst many in the electricity business – that given the meaningful uncertainties in generation and supply, one of the safest places to be, and the core asset for any company that owns it, is its transmission and distribution network.  Often regulated and in growing demand as more and more assets were connected to the grid, this is an area somewhat insulated from the vagaries of generation technologies, environmental regulation and consumer fickleness. Right now, a decline in wholesale power prices (due to soft demand, shale gas and the spread of zero-marginal cost wind and PV) has created room in utility bills for operators to make profits and re-invest, and a chance for regulators to approve rate-base increases with only modest consumer pushback.

Those that cannot be in this business because of unbundling rules are feeling a degree of envy.  Among those that are, there has been a wave of M&A activity.  The recent consolidation in the US (Exelon + Pepco, Southern + AGL, Duke + Piedmont, Dominion + Questar) has driven network consolidation in the Mid-Atlantic, Southern regions, Carolinas and Utah. In California, Edison and PG&E are readying the grid to receive power from solar customers, providing electric vehicle charging and building transmission capacity to support utility-scale solar and wind power.

There have been comparable moves overseas, driven by slightly different dynamics – Iberdrola’s acquisition of UIL, National Grid’s sale of its gas distribution arm to focus on electricity, Enel’s growing investment in and attempt to open-up its networks, China’s gradual acquisition of around $19bn of overseas grid assets since 2014.  While there are some counter-examples (including Fortum’s sale of its electricity distribution arm, there seems to be little question that the evolution of the electricity network over the next five-to-ten years will be a fascinating story involving a degree of innovation only matched by the advent of renewables over the last decade. It will also be an opportunity to deploy billions of dollars to the benefit – or not – of shareholders and rate-payers.

We may not be offering an actual smack-down between dueling billionaires, but the discussions at the BNEF Future of Energy Summit 2016 should be almost as exciting. I look forward to seeing you there, and in the meantime, look out for updates on http://about.bnef.com/summit/ and via the hashtag #BNEFSummit.

Liebreich: The Quest for Resilience – What Could Possibly Go Wrong?