Net-zero emissions by mid-century can be achieved by many routes, but none are easy, and none are certain. One thing is clear: there needs to be an immediate, unprecedented acceleration in deployment of existing technology this decade, be that renewable energy, heat pumps or electric vehicles. In the twenty years from 2030 to 2050, decarbonization needs to accelerate in harder-to-abate sectors, and new technologies that complement clean power such as hydrogen, carbon capture and storage, and small modular nuclear, have to be rolled out.

BloombergNEF’s New Energy Outlook 2021 describes three climate scenarios to meet net-zero emissions and keep global average surface temperatures well below two degrees above pre-industrial levels. The third of them, BloombergNEF’s Red Scenario, describes a pathway that is dominated by clean power, and smaller, more modular, nuclear is deployed to complement wind, solar and battery technology in the power sector, and so-called red hydrogen is manufactured using nuclear power. Within the Red Scenario, the following solutions play a role in abating emissions in line with the Paris Agreement: 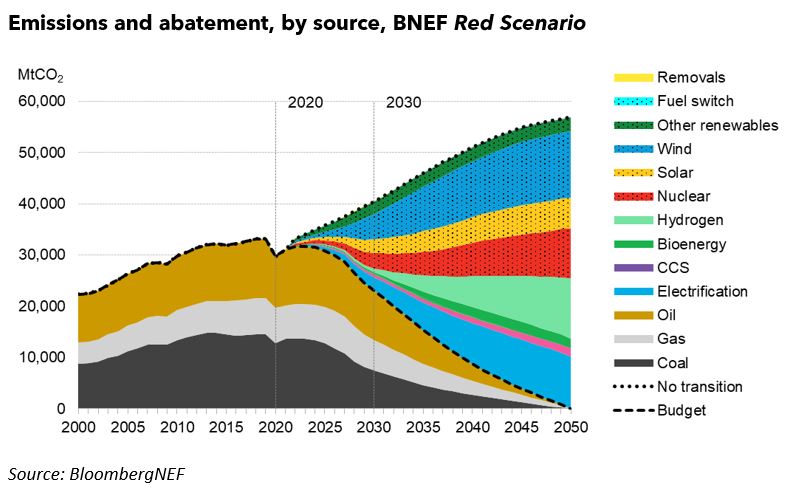 Nuclear power plays an important role in the Red Scenario to help reach net-zero emissions. With an extended lifetime of 20 years for conventional nuclear plants,  the introduction of small modular nuclear reactors from the late 2020s and the production of red hydrogen via electrolysis, powered by nuclear, leads to a nuclear renaissance, with just over 7,000GW of nuclear capacity installed by 2050. Half of that is used to generate around 19,000TWh of electricity in the end-use economy. The other half is used to power electrolyzers and manufacture so-called red hydrogen. This drives uptake of nuclear fuel, which overtakes oil in 2034 as the dominant source of primary energy, steadily increasing to 502EJ in 2050, up 17-fold from today.

Register for our upcoming webinar: COP26 in Review: Break Through or Break Down? here. 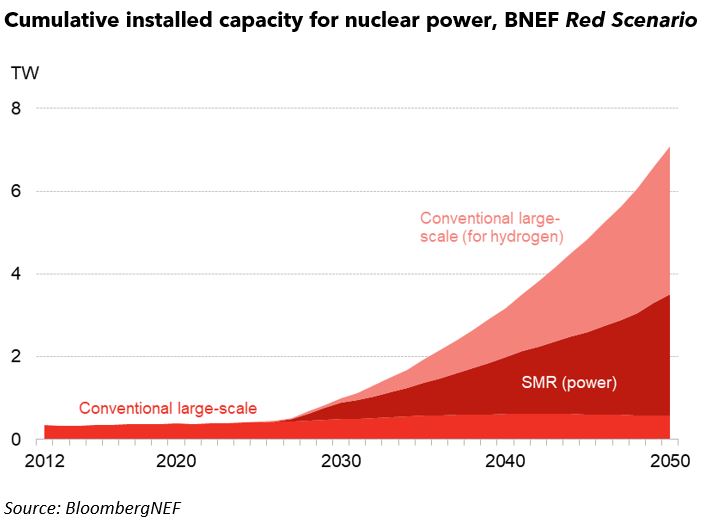 BNEF doesn’t assume as much hydrogen production through electrolysis in its Red Scenario, therefore the power sector sees the second-largest system between the Green and Gray Scenarios. As nuclear power plays a dominant role in the power sector and it runs flat out most of the year, its lack of flexibility means we see higher seasonal curtailment. Nevertheless, as renewables are cheap, they still provide 39% of generation, of which 70% comes from wind and 30% from PV. By 2050, utility-scale PV capacity tops 12.2TW and wind 9.6TW, while batteries see the highest uptake, with 3.4TW, as higher flexibility is required in the Red Scenario to complement nuclear power. 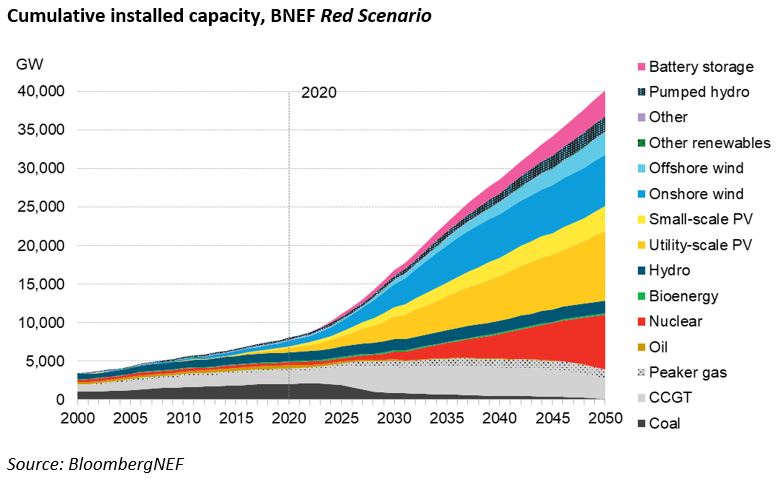 In addition to the relatively high cost of small modular nuclear reactor technology, and its being in its infancy, there may also be other barriers in the Red Scenario associated with uranium resources and nuclear waste. Despite uranium being about as common as tin or zinc in the earth’s crust, concentrations need to be high enough and the cost of extraction low enough for mining companies to invest. Rising demand for uranium could put pressure on prices as supply through prevailing production methods is estimated to last 90 years at current consumption rates. Perhaps the biggest hurdle for our Red Scenario is nuclear waste. Researchers are still trying to work out which long-term disposal option suits nuclear best as radioactivity lasts hundreds of years and potential leaks through corrosion in the materials proposed for locking away the hazardous waste could have large consequences for the environment. Alternatively, if nuclear power can’t be considered an option for some countries in their long-term energy strategy, they could put a higher emphasis on renewable energy or pursue carbon capture and storage instead.