When it comes to the war on plastic, we aren’t even close to winning it.

In the absence of significant intervention, demand for plastic is set to surge over the coming decades. Not only will this result in more greenhouse-gas emissions as plastic manufacturing increases, the build-up of waste will also inhibit the ocean’s ability to absorb carbon, further undermining efforts to combat climate change.

The situation isn’t hopeless if individuals, companies and governments step up their action to reduce consumption, clean up production, maximize recycling and switch to lower-carbon alternatives.

Here are five charts from BloombergNEF laying out the world’s penchant for plastics and the path to a greener future.

1. Seemingly unstoppable growth through to 2050

The plastics market has expanded rapidly over the past two decades, with demand for polyethylene (PE) and polypropylene (PP) doubling since 2000. Efforts have been made to curb the consumption of plastic, including restrictions on certain single-use plastic items in the likes of the UK, Australia and India. Even so, the world’s appetite for plastic is set to continue to grow in line with GDP, population growth and rising income levels. 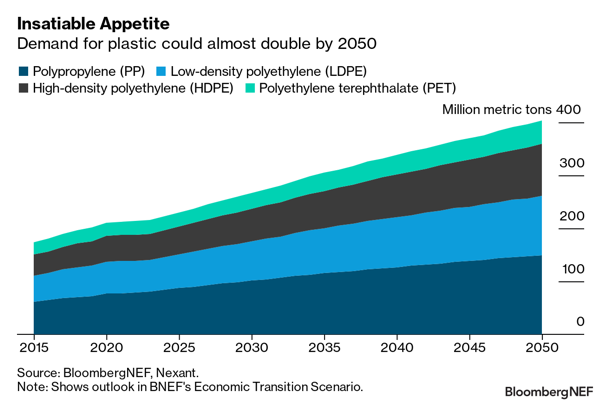 By 2050, demand for some of the most common types of plastic, PE, PP and polyethylene terephthalate (PET) – is expected to surge by 90% from today to 403 million metric tons. That’s based on BNEF’s Economic Transition Scenario, which is driven by techno-economic trends and market forces, and assumes no new policies are enacted.

2. Hunger for plastic will fuel oil demand for decades

Plastic is made from a range of petrochemical products, largely derived from crude oil. Increased consumption of plastic is therefore set to propel demand for raw materials like naphtha that are needed to make petrochemicals – in other words, spur the need for more oil.

By 2050, demand for some of the most common types of plastic – PE, PP and polyethylene terephthalate (PET) – is expected to surge by 90% from today to 403 million metric tons. That’s based on BNEF’s Economic Transition Scenario, which is driven by techno-economic trends and market forces, and assumes no new policies are enacted. 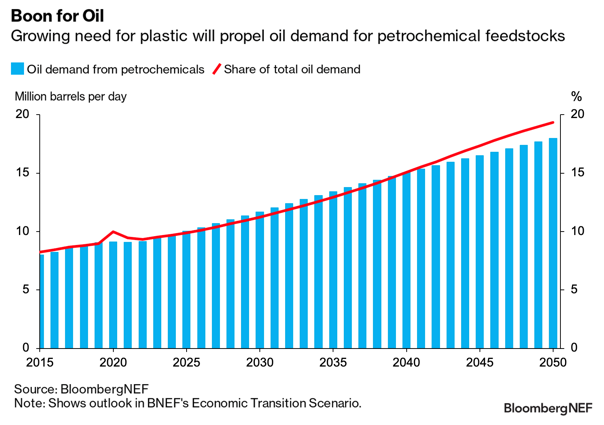 “As electrification and fuel efficiency eat into oil usage in road transportation, it is likely that growth in oil demand will be driven by petrochemicals and aviation fuels,” says Sisi Tang, an oil and petrochemicals analyst at BNEF. “This has led to a change of investment focus for oil companies. Reliance, Saudi Aramco and OMV are among the firms that pivot to chemicals production when the fuels business becomes challenging.”

The expansion of petrochemicals production will be concentrated in Asia, especially China, followed by the Middle East. Asia is forecast to account for over 60% of the increase in oil-derived petrochemical feedstock demand to 2050.

3. Things aren’t as bad as they could be

While demand for both plastic and oil are set to keep marching upwards over the coming decades, that doesn’t mean you should give up on dropping your bottles in the recycling bin.

True, recycled materials and bioplastic have made little headway so far, comprising less than 10% of demand for PE, PP and PET in 2021 and displacing just 0.3 million barrels per day of oil. This comes as recycling rates have been relatively flat over the past decade as policies to encourage growth have had a limited impact.

The penetration of bioplastics, derived from the likes of sugar cane, is expected to remain stymied by high costs and a lack of regulatory support. But the prospects for both mechanical and chemical recycling are projected to improve, staving off an even larger increase in oil use. 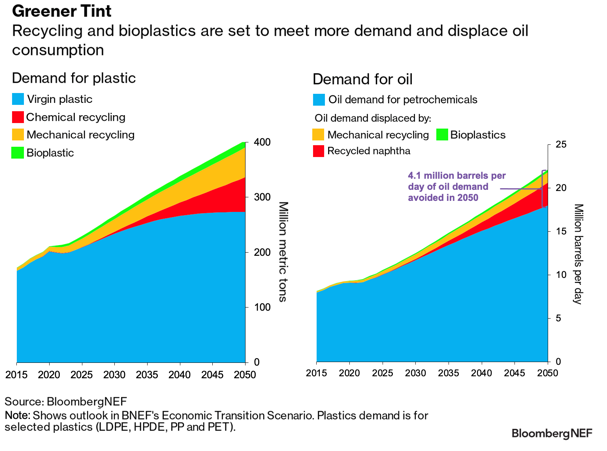 “Sustainability targets, from both the policy side and the consumer side, have posed a risk to the business case of petrochemical producers, forcing them to raise their own recycling ambitions and step up investment,” says Tang. “This is the biggest uncertainty to oil demand, as the fast ramp-up in recycling capacity erases a significant part of virgin demand for oil-based feedstocks in the sector.”

Indeed, around 35% of plastics demand could be met by recycled materials and bioplastics in 2050, avoiding the use of 4.1 million barrels per day of oil at that point.

4. More progress could undoubtedly be made

Enhanced efforts to shift to a more circular economy – whereby materials are reused and waste is reduced – could lead to a further 7.7 million barrels per day of oil demand being avoided in 2050, a 43% drop.

In BNEF’s Advanced Circular Economy Scenario, which assumes an acceleration of recycling, lower consumption of single-use plastics and increased use of bio-based feedstocks, the growth in oil demand is very much slowed. Rather than continuing to climb, oil demand under these conditions would actually peak at 11.4 million barrels per day in 2043, before declining to 10.2 million barrels per day in 2050. 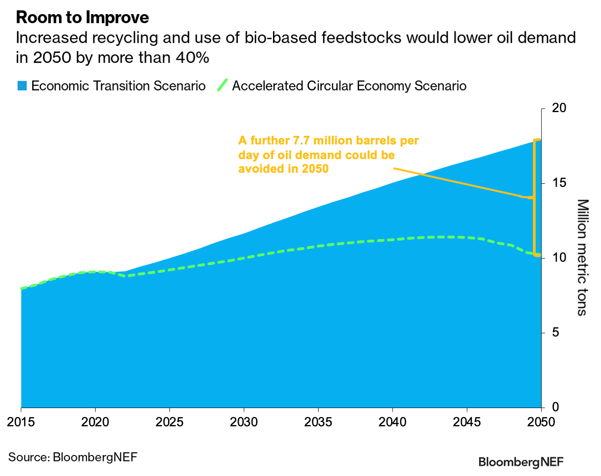 However, translating this into reality will not be an easy task.

“It requires not only increased recycling efforts across the plastics supply chain, but also a reduction in total plastics demand,” says Tang. “Coordinated efforts between policy makers, consumers and manufacturers are needed to lower our reliance on single-use plastics and find low-carbon substitutes.”

5. The route to net-zero plastics

Petrochemicals are the building blocks of plastic and their production accounts for around 2% of the world’s carbon emissions. Major players in the supply chain, such as LyondellBasell Industries, Braskem and BASF, have laid out net-zero targets, but decarbonizing this sector is likely to be capital intensive and increase costs.

BNEF estimates that between now and 2050, as much as $759 billion in additional capital expenditure will be required for new clean capacity and lower-emission retrofits, compared to business-as-usual capacity growth. This money can be directed toward a wide range of technologies across the supply chain.

Options include replacing traditional fossil-fuel-based feedstocks such as naphtha with bio-based and recycled alternatives; electrifying production processes and using renewable power; and further downstream, improving recycling once products reach the end of their life. Carbon capture and storage could play a role across multiple stages – in everything from upstream oil extraction and refining, to steam cracking and chemical recycling.