Two-wheeled vehicles like motorcycles, mopeds and scooters represent the largest segment of road transport, with global sales reaching 82 million in 2021. This segment accounted for less than 5% of global carbon dioxide emissions from road transport in the past decade and is one of the vehicle segments closest to achieving zero tailpipe emissions by 2050, according to BloombergNEF’s Electric Vehicle Outlook 2022.

EVO2022 shows electrification is a cost-effective route to reduce carbon emissions from two-wheelers, while other technologies like hydrogen fuel cells, synthetic fuels, or internal combustion engines with carbon capture aren’t projected to be economically competitive. BNEF expects all zero-emission two-wheelers to be battery electrics in the future.

In EVO’s ETS, electric vehicles rise to a 74% share of the global two-wheeler fleet in 2050, from 20% in 2021. Despite the progress in electric sales, time is needed for the fleet to reflect the change. Sales of two-wheelers based on internal combustion engines (ICE), for example, rebounded in 2021 while slow retirement rates are keeping more ICE vehicles on the road.

Today, the speed and scale of electric two-wheeler adoption varies greatly by country. Policy makers need to take immediate actions to support electrification of this segment in order to stay on track for net zero by 2050, particularly in countries where the use of two-wheelers is prevalent, such as China, India, Indonesia and Vietnam. 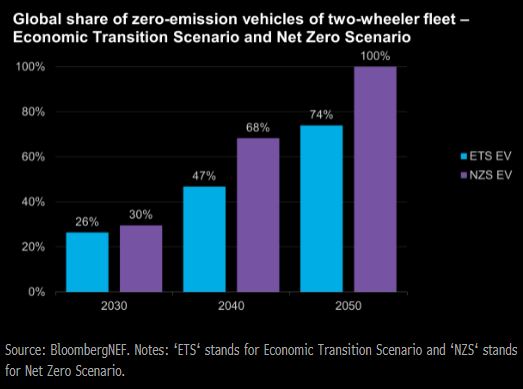 China accounted for 53% of global two-wheeler sales in 2021, with electric comprising 70% of the 39 million two-wheelers sold in the country. Implementation of new e-bike standards has been a major sales driver as e-bike owners are propelled to switch to vehicles that comply with new standards.

In ETS, China’s electric two-wheeler sales increase to 33 million units in 2025, from 30 million in 2021, driven by booming food and last-mile delivery business, city-level enforcement of new e-bike standards and a shift in demand from public transport to private vehicles in the wake of the pandemic. Falling battery prices, expanding EV lineups and the rise of battery swapping continue to drive up EV adoption over the next three decades. Nearly all new sales are electric after 2035.

Even without a further push, EVs in China account for almost all new sales of two-wheelers in the mid-2030s and 91% and 99% of the two-wheeler fleet by 2040 and 2050 in ETS, respectively. The country can potentially end sales of ICE two-wheelers earlier, with stricter emission requirements and local zero-emission zones. This also suggests other markets must step up efforts to eliminate ICE vehicles. 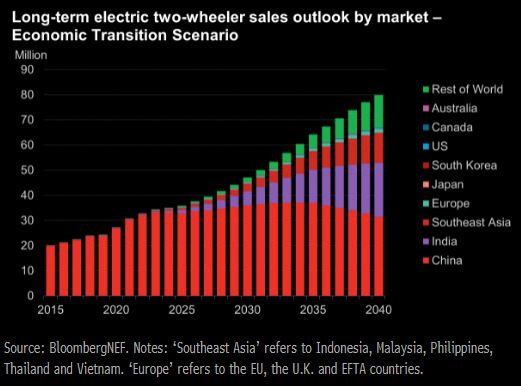 India and Southeast Asian countries, like Indonesia and Vietnam, are major two-wheeler markets after China, while African countries see some of the highest sales growth. Despite booming demand in this segment, many countries are just beginning to adopt EVs, and governments often offer few direct financial incentives for electric two-wheeler purchase and usage. Sales of ICE two-wheelers will recover strongly in the near term, keeping the EV share of total sales below 10% by 2025.

Still, support for local EV manufacturing, like India’s $3.5 billion ‘production-linked incentive’, can help boost manufacturers’ interests. Pure EV manufacturers such as Ola Electric, as well as conventional manufacturers like Hero MotoCorp and TVS Motor are planning to bring more electric models to the market. Declines in battery prices drive down the upfront cost of electric two-wheelers, making them competitive with their ICE counterparts in markets outside China after 2025. Coupled with an expansion of charging and battery swapping infrastructure, electric two-wheeler sales grow rapidly between 2025-2040.

Around 76% of two-wheelers sold in India and Southeast Asia are electric in 2040 in ETS, while other emerging markets like Latin America and South Asia (excluding India) see EV share of sales rise to 66%. EVs account for some 26%-36% of total two-wheeler fleets in those markets by 2040 and 55% to 77% by 2050.

To reach 2050 net-zero targets, the electric two-wheeler fleet needs to expand in emerging markets at a compound average growth rate of 20% annually between 2021 and 2050 in NZS, which is 1.5 times the growth achieved over the past decade.

Developed markets such as Europe, Japan and South Korea are much smaller in terms of sales volume. Two-wheelers aren’t a primary transport mode and demand was on flat or on a downward trajectory prior to the Covid outbreak. With the boom in outdoor recreation, shifts in personal mobility preference and a shortage of passenger cars, two-wheeler sales rebounded in 2021 by 3% to 15% across wealthier countries. Still, they represent less than 3% of global sales and 5% of the global fleet between 2022-2025.

South Korea stands out with the EV share exceeding 28% by 2025, while Europe sees 16% of new sales to be electric in the same period in ETS. A production ramp-up and expanding product lineup from electric two-wheeler companies, combined with government subsidies, are some key enablers in those markets.

In North America, Japan and Australia, sales of electric two-wheelers are limited, with less than 5% of total two-wheelers sold being electric by 2025. EV sales grow steadily over the next two decades. By 2040, some 15% to 26% of two-wheelers on the road are electric in ETS. By 2050, the EV share increases to 48% to 67%. Improvements in electric two-wheeler performance, falling costs and growing interest from leading manufacturers like Harley-Davidson, Honda and Yamaha may help accelerate the adoption. Still, there is a large gap between the ETS and the Net Zero Scenario, prompting calls for more urgent policy action and more ambitious ICE phaseout targets from policy makers in those regions.