New output from the BNEF database shows that there were 1,013GW of wind and solar PV generating capacity installed worldwide as of June 30, 2018. The 1TW milestone would have been passed sometime just before this date. The total is finely balanced between wind (54%) and solar (46%). 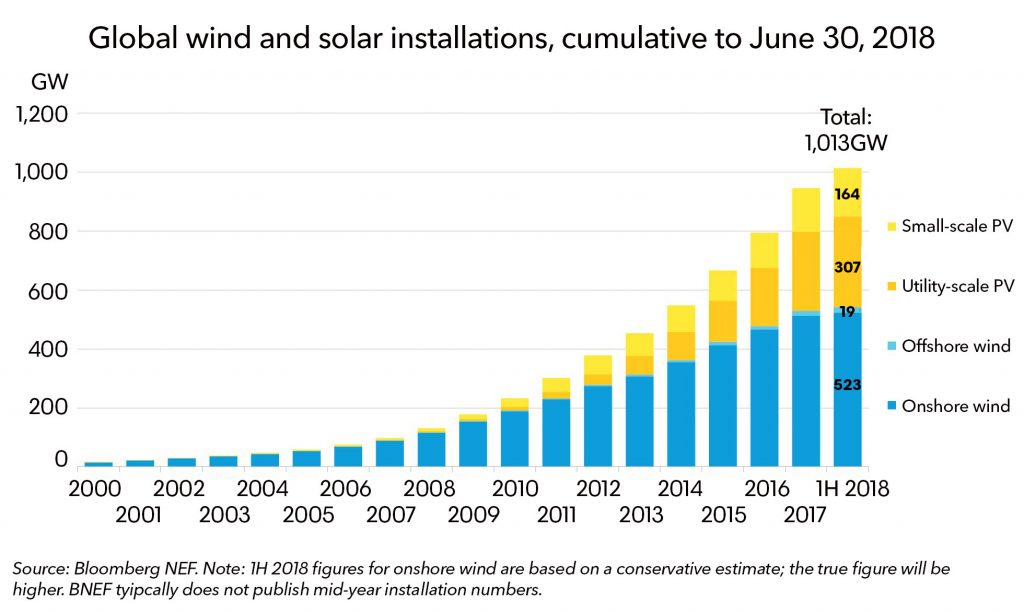 Looking back on the first terawatt of wind and solar reveals just how far these two sectors have come. Total installed capacity has grown 65-fold since the year 2000, and more than quadrupled since 2010.

Even more striking is the growth of solar PV alone. As recently as 2007, there was just 8GW of PV capacity installed, compared with 89GW of wind. Since then, PV has grown from just 8% of total installed wind and solar capacity, to 46%. In the process, PV installations grew 57-fold, with utility-scale PV overtaking small-scale PV in 2014. Wind still represents the majority of the installed base at 54%, but is likely to relinquish this lead soon.

What about other renewables?

We have singled out wind and solar in this piece because they are the fastest-growing sources of power generation and have just recently achieved the 1TW mark. If we were to include all other renewables, including hydropower, the total would already exceed 2TW, with the 1TW mark attained about a decade ago. Most of the growth in the intervening period can be attributed to wind and solar.

Did we forecast it right?

Reaching back into the BNEF archives allows us to examine our own forecasting track record, and see whether we were too optimistic or conservative on the growth of solar and wind. In our 2013 Global Renewable Energy Market Outlook (web | Terminal) – also known as GREMO – we estimated that global wind and solar installations would hit 865GW by the end of 2017, and get very close to 1,000GW by the end of 2018. In actual fact, the world had hit 945GW by end-2017, thus outperforming our expectations by 9%, and hit 1,000GW about six months earlier than we forecast. In other words, we were very close, but not quite aggressive enough.

We now estimate that wind and solar will hit 1.1TW by the end of this year – 11% more than we forecast five years ago. Given that the market has more than doubled in that time, we are happy to claim this as a ‘win’. As the figure below shows, our 2013 forecasts for onshore wind and small-scale PV ended up being very accurate. We were a little too bullish on offshore wind, while utility-scale PV has exceeded our expectations. 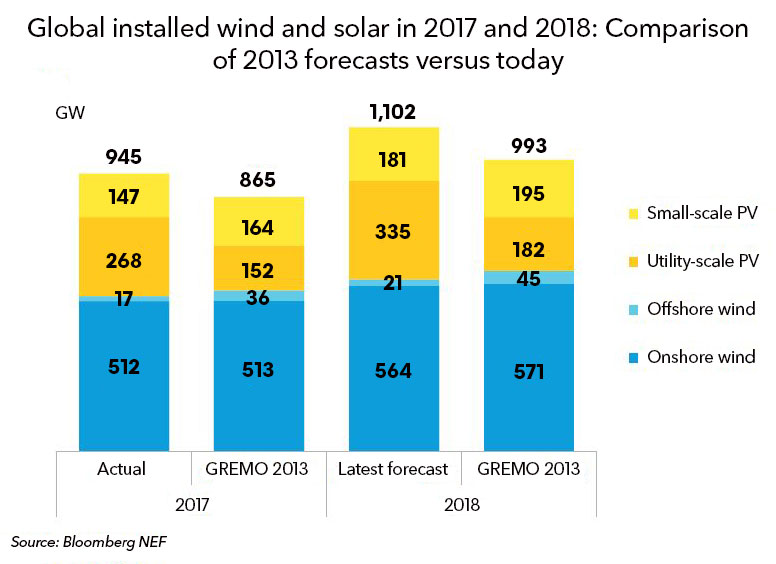 BNEF clients can see the full report, “World Reaches 1,000GW of Wind and Solar, Keeps Going”, with data by region and technology on the Terminal or on web.

Investment Needs of a 1.5°C World